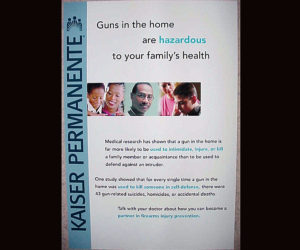 DRGO has been receiving email inquiries about referrals to gun-friendly healthcare providers for years. From the time I joined DRGO’s leadership in 2015, I’ve seen a steadily increasing stream of such emails. Since the launch of 2Adoc.com in September 2017, something new has started occurring: people have been contacting us to tell us they are being inappropriately asked about gun ownership.

It has long been the position of DRGO that such questioning (and the ant-gun propagandizing that usually follows) constitutes a boundary violation. We are countering this intrusive practice by helping people find healthcare providers who won’t intrude on their privacy or badger them about their gun ownership.

I’ve made mention, previously, of how ridiculously inappropriate blanket questions about gun ownership and storage practices.

First, a woman wrote to tell us that when she went to see her family practitioner for a simple rash, she was asked if: she has a living will, lives alone, has a smoke alarm and if she has guns in the home.

“At the first question, I politely asked the nurse if she didn’t think that was a bit nosy. She agreed it was and said she had more nosy “social questions” for me. When she didn’t stop the questions, I told her it was none of their business. I’ve been happy with the doctor over the years, but after this Welcome-to-Mother-Russia experience, I’m looking for an alternative.”

Did you catch that? It has become routine for gun ownership to be registered in a patient’s file like their weight, blood pressure and other medically relevant information.

The second instance comes to me by way of a phone call I received from a medical school friend of mine. He was at a coastal tourist hotspot and developed some chest pain after a meal. He went to the local Emergency Department and it turned out to be nothing. However, he recounted with relish the experience of the medical history conducted by the nursing staff. When asked if he has any guns in the house, he paused briefly and then, with his characteristic chutzpah, told them bluntly: “Yes! A lot!“.  They were taken aback, remarking that nobody had ever answered that question in the affirmative.

Medical staff, like lemmings, go down the list of questions not thinking for a moment if these questions are appropriate (never mind relevant). This represents the normalization of an effort to insinuate an anti-gun agenda into patient care. Furthermore, it exploits patients’ assumption of their doctor’s expertise with the intent to deceive them out of their exercise of their constitutional rights.

The What You Can Do Initiative recently launched by Garen Wintemute and his Violence Prevention Research Program (funded by millions of dollars wrenched from the California taxpayer by extra-legislative means) seems to offer reassurance to those who would be suspicious of the gun question on their routine questionnaire.

After all, “1) Ask your at-risk patients about firearms. 2) Counsel them on safe firearm behaviors. 3) Take further action when imminent hazard is present” sounds innocuous and echoes DRGO’s position that only in rare instances, where the clinical circumstances warrant, should the gun question be asked. Funny that it comes less than two years after Wintemute encouraged physicians to “counsel” their patients about gun ownership, conveniently citing as supporting “evidence” biased anti-gun advocacy research – a portion of it his own.

However, the above two cases (and countless others occurring daily around the country) put the lie to any claims of respect for privacy and the second amendment rights of patients.

It is often true that one is judged by the company they keep. And so any benefit of the doubt that I might be tempted to give to Wintemute gets blown out of the water when he endorses the entry of Kaiser Permanente into the arena of “gun violence research” by saying: “Kaiser would be an ideal setting for research on how best to integrate firearm violence prevention into patient care.”

This is like putting the fox in charge of the henhouse. Kaiser has a long history of undermining second amendment rights of its patients.

In the late 1990s, Kaiser placed posters in patient exam rooms and waiting rooms carrying prejudiced messages hostile to gun ownership (see: Poster 1, Poster 2, Poster 3 and Poster 4).  Two of the posters even urge Kaiser Health Plan members to purge their homes of guns—in effect, to give up their civil right to have guns.

The official Kaiser Permanente message to parents was further hammered home in a patient advice web page (accessed May 12, 1997) for healthy child visits (ages 10-12 years) to the doctor:

“The safest thing is NOT to have a gun in your home, especially not a handgun.”

The original text was in boldface type and is the first item in a bulleted list of tips titled “What You Can Do.”

That Kaiser parent advice web page includes a list of factoids lifted directly from a brochure published jointly by the Center to Prevent Handgun Violence (CPHV) and the American Academy of Pediatrics (AAP).  The former entity was the nonprofit wing of Handgun Control, Inc., the dominant gun prohibition lobby at the time (Handgun Control, Inc. has since been rebranded as the Brady Campaign). There is no medical organization more virulently active against gun owners and the civil right of gun ownership than the AAP.

Patients want to trust their provider to not make mistakes and to not lie to them. By promulgating the CPHV’s and AAP’s anti-gun agenda Kaiser Permanente clearly demonstrated itself to be not trustworthy when it comes to respecting patient privacy and second amendment rights.

For reasons like this, DRGO launched 2Adoc.com. This free service will connect patients with healthcare providers who respect their second amendment rights. Participant information will not be shared publicly.

If you are a healthcare provider and would to increase your practice, consider registering with 2Adoc.com.

Patients may request to be referred to a provider in their area using this patient request form.