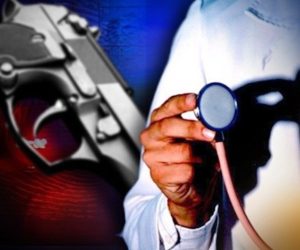 [Editor’s note: The following letter by DRGO’s Dr. Arthur Z Przebinda, MD is a response to comments to a post by The Truth About Guns quoting him about the principles underlying Florida’s Firearms Protection Act (FOPA). The letter was originally published September 19, 2016 at The Truth About Guns. It is reproduced here by permission.]

I’m concerned that you and your readership may be being misled and distracted by the recent publications about “studies” of the “conversation” about guns that doctors are or are not having with their patients.

Let there be absolutely no doubt that this recent increase in chatter about doctors being able or obligated to talk to their patients about guns is intended to sway opinions and perceptions regarding legislation similar to Florida’s Firearms Owners Privacy Act – which led to the Wollschlaeger case and inspired other states to pursue legislation dealing with the matter. The Kaiser Health News article you included in your September 14th Daily Digest (and for which our Director, Timothy Wheeler, MD was interviewed) makes reference to these cases.

The issue is NOT about individual doctors’ individual rights.  It’s not about any of the noble principles we hold dear and I was dismayed to see some of TTAG’s Armed Intelligentsia getting mired in debating these irrelevant (to the case) points. The issue at play and the true agenda is to achieve political gains and undermine the RKBA.

The meat of the matter is the attempt by professional medical specialty organizations to insinuate their anti-gun political agenda into the patient encounter.

Public discussion of the matter is couched in terms of individual rights because that’s more palatable to the general public which may not be too friendly to organizations, corporations or other such entities influencing their lives. Unfortunately, luminaries like Eugene Volokh are missing the forest for the trees and focusing only on the individual rights of the physician. They are not recognizing the fact that those individual liberties are being exploited by politically-minded bodies with an anti-rights agenda.

As I pointed out in the comments on September 14th, the American Academy of Family Physicians has an official policy stating: “The Academy opposes private ownership of weapons designed primarily to fire multiple (greater than 10) rounds quickly.”

This is not an isolated example. DRGO has been exposing, chronicling and combating this kind of anti gun animus in organized medicine for over two decades. A perusal of our site (and especially our three-part series, The History of Public Health Gun Control) will demonstrate ample proof of organized medicine’s anti-gun agenda and anti-gun efforts.

If physicians do not know anything about guns or “gun safety”, where will they turn for their information? To their professional specialty organizations—the very organizations that, for decades now, have been trying to convince the general public and their patients that guns are bad and dangerous to have around.

The Wollschlaeger case—and the attempts to convince the general public (and jurists) that it’s perfectly innocent and well-intentioned for doctors to have unrestricted conversations about firearms with their patients—is about specialty organizations using the authority of physicians in the healthcare setting to turn public sentiment against gun ownership.

Talk about a “camel’s nose in the tent” scenario.

Without respect for patients’ fundamental and constitutionally protected rights, anti gun organizations like AAP and AAFP can first encourage their member clinicians to “talk to their patients” about guns, “bringing a message of safety”. But what if the member clinicians know boo about guns or “gun safety”? No worries! Here are the script and the talking points that we coincidentally had sitting in our drawer all this time and that, coincidentally, shows how rotten guns are and how dangerous your home is when you own one.

To summarize, the goals of the Wollschlaeger case for the academic medical establishment, are:

Step one: Get a green light for doctors to talk about guns with patients.

Step two: Feed these doctors their talking points (which happen to be ready-manufactured by anti gun advocacy researchers and advance an anti gun agenda), like the recent publication from Garen Wintemute which suggests that doctors say that a “large body of evidence” (part of which was, coincidentally, produced by Wintemute himself) demonstrates just how much more unsafe a home is when there is a gun inside.

All this can be accomplished by exploiting the authority of the physician in the clinical setting. This is why DRGO supports upholding the Wollschlaeger ruling and has urged the court to apply the Gentile balancing test to correctly subordinate the physician’s professional First Amendment rights to the patient’s personal Second Amendment rights.

Note that I said “the physician’s professional First Amendment rights”. We must make a distinction between casual speech (“Hey, how about those Dodgers?” or “Ready for duck season?”) and professional speech (“It is absolutely dangerous for you to keep a gun in the house and I have publications supporting that notion as well as our organization’s recommendations that you get rid of guns or at least keep them disassembled and locked up”.)

It is well established in the laws of every state that certain types of physicians’ speech are strictly prohibited. The clearest example is a physician propositioning sex to patients. This kind of speech violates the doctor-patient trust and is subject to severe sanctions. Lobbying patients politically, like urging them to give up their constitutionally-protected fundamental rights falls into that category.