Timothy Wheeler, MD is the Founder and former director of Doctors for Responsible Gun Ownership, a project of the Second Amendment Foundation.

Dr. Wheeler on Cam & Co. speaking about his article comparing deaths from medical errors to deaths from firearms. He points to the hypocrisy of associations such as the American Academy of Pediatrics who have spent decades and countless thousands of dollars attempting to make gun ownership a public health issue, rather than focusing on ways to prevent these common but deadly mistakes. Originally published by NRA News on 5/5/16. [Dr. Wheeler’s segment begins at 2:26:10]

Dr. Wheeler speaks with Cam Edwards of Cam & Co. about invasive questions by doctors to their patients about gun ownership in the home and Florida’s Firearm Owners’ Privacy Act. Currently, the law is under appeal before the U.S. Court of Appeals for the 11th Circuit, but similar legislation is being considered by lawmakers in a dozen other states. Dr. Wheeler discusses how certain medical specialty groups are trying to use the doctor’s office to message gun control as well as DRGO’s opposition to those efforts as outlined in his article: “Boundary Violation: Gun Politics in the Doctor’s Office“. Originally published by NRA News on 4/5/16. [Dr. Wheeler’s segment begins at 0:26:05]

Dr. Wheeler participated in a discussion of Seattle’s new gun tax on an episode of the City of Seattle’s show City Inside/Out. Originally published by Seattle Channel on 1/28/16.

Dr. Wheeler is interviewed for Medscape by NYU bioethicist Dr. Art Caplan as part of a debate: “Should Physicians Have a Role in Gun Safety Counseling?” Published on 1/13/16 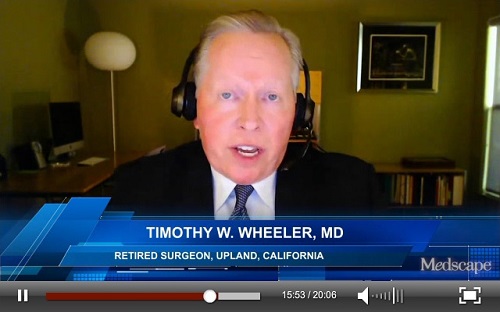 Dr. Wheeler speaks to Cam Edwards of Cam & Co. about the Washington Post article “How Gun Deaths Became as Common as Traffic Deaths”. He points out the author’s focus on regulating guns like cars would require the repile of many gun laws. Originally aired on NRA NEWS on 12/22/15 [Dr. Wheeler’s segment begins at marker 1:48:25]

Dr. Wheeler providing the history of Congress defunding the CDC’s gun control advocacy in an appearance on Cam Edwards’ show. Originally aired on 12/2/15.

Dr. Tim Wheeler was an in-studio guest on Phillip Naman’s Firing Line Radio Show, which aired June 27 and 28. The subject was doctors asking their patients politically motivated questions about guns in their homes, a form of unprofessional physician conduct called an ethical boundary violation. See our June 27, 2015 blog entry “What to Do When Your Doctor Asks About Your Guns” for the background on this hot topic.

Filmmaker and health care commentator Colin Gunn graciously invited Dr. Tim Wheeler to appear on his broad-spectrum podcast. Of interest to Gunn is the public health gun prohibition movement and what DRGO is doing about it. Dr. Wheeler’s appearance starts about 9 minutes and 20 seconds into the segment. Originally published by The Colin Gunn Show on 5/8/2015

Dr. Timothy Wheeler is interviewed on an episode of “To the Point” on KCRW, the NPR affiliate in Santa Monica, California. Dr. Wheeler joined Mother Jones editor and author Mark Follman, former Centers for Disease Control official Mark Rosenberg, and University of Toronto sociologist Jennifer Carlson in discussing Follman’s Mother Jones article and its claims about the costs of “gun violence.”  Originally aired by KCRW on 4/20/2015