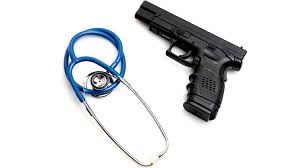 The AMA just announced that it will make an “unprecedented” push for more gun control laws through resolutions presented at its House of Delegates at its next annual meeting June 9-13. This is not really unprecedented, as the AMA has been advocating anti-gun measures for three decades now, along with many co-conspirator specialty associations. But it is a way for it to jump on the current popular bandwagon for restricting guns since some of the teenagers from the Marjorie Stoneman Douglas Valentine’s Day shootings have become media celebrities.

Jumping aboard progressive bandwagons is the main tactic left to the AMA to wield influence, since it now includes no more than 25% of America’s physicians as members, even though it claims to represent us all. Its leadership has left most physicians behind by focusing on politics more than medicine and undercutting physician autonomy by supporting Obamacare. In this case, they continue denigrating the vast number of Second Amendment respecting health care providers by continuing to back gun control—as if anything short of full civilian disarmament would substantially reduce “gun violence”, let alone affect violent crime. (Regarding eliminating scary “assault rifles” see the latest school shooting at Santa Fe using a pump-action shotgun and a .38 caliber revolver; regarding the consequences of handgun prohibition, see the United Kingdom—or anywhere.)

The AMA has a very long history of attacking guns and gun ownership as too dangerous for commoners. Rarely, members with other views get a hearing (which is then ignored); more typically, even that doesn’t happen, as its governance seeks to justify positions, not develop them.

It quotes manipulated data, like all anti-gun rights groups, basing this outcry on an inflated list of 2018 school shootings making the rounds, even though only a fraction of those events qualifies as attempts at mass shootings on students during school. (PolitiFact occasionally gets it right.)

From the Forbes article:

“This year, here are just some of the measures doctors want the AMA to back:

Some corrections are in order here.

First of all, “here are just some of the measures the AMA wants doctors to back.”

Then, regarding the claim by AMA President David A. Barbe, MD, that “Gun violence in America today is a public health crisis”,  DRGO has repeatedly put paid to that untruth (e.g., here). Is it “one that requires a comprehensive and far-reaching solution” such as:

Legislating morality has always been impossible in a diverse polity like the United States. They’ll have no more luck with this than the abortion, capital punishment or immigration battles have had in uniting American opinion about them.

To quote William F. Buckley, Jr.’s National Review mission statement, DRGO “stands athwart history, yelling Stop, at a time when no one is inclined to do so, or to have much patience with those who so urge it.” There’s progress (like ensuring a well-educated, ethical populace enjoying all the rights of individual liberty) and then there are progressives (the opposite). DRGO stands for progress.

Let’s not let them get away with it!