In the wake of the Newtown, Connecticut school mass shooting, many have called for new restrictions on gun owners.  The blood at Sandy Hook Elementary School wasn’t dry before mainstream media pundits, scheming politicians, and career gun control advocates began heaping condemnation and slander on American gun owners.  Blaming innocent gun owners for the murderous actions of a few high-profile mass shooters is natural to them, since they blame guns for crime, rather than the humans who misuse them. 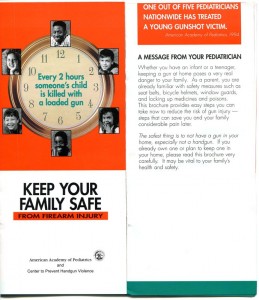 But one class of gun control advocate in particular has become vocal since Newtown.  They had been silent for many years in the ongoing political assault on gun owners.  In the weeks since Newtown we have seen a flurry of news articles from doctors and medical organizations (see this announcement from the American College of Physicians).  They advocate a “public health approach” to the problem of “gun violence.”  Most lay readers see these calls for more gun control as a fresh approach.  Before Newtown the only public urging for gun control from medical researchers had been a few obscure medical journal articles, briefly covered by an always sympathetic mainstream media, but otherwise disappearing into the dust of the average news day. But as we shall reveal in this three-part series, the public health push for more gun control is not new at all.

The public health push for banning guns goes back to the late 1980s at least.  In a 1989 issue of the Journal of the American Medical Association, Centers for Disease Control (CDC) official Patrick O’Carroll, MD stated “We’re going to systematically build a case that owning firearms causes deaths.  We’re doing the most we can do, given the political realities.” (P.W. O’Carroll, Acting Section Head of Division of Injury Control, CDC, quoted in Marsha F. Goldsmith, “Epidemiologists Aim at New Target: Health Risk of Handgun Proliferation,” Journal of the American Medical Association vol. 261 no. 5, February 3, 1989, pp. 675-76.)  The CDC’s anti-gun activism ran unabated until the mid-1990s.  We shall discuss those events in Part II of this series.

These medical researchers insist that what they call “gun violence” is a public health problem.  That they prefer the term “gun violence” is revealing of their mind set in approaching the problem, because it puts the emphasis on guns and not on the humans who misuse them.  This misleading public health terminology, enthusiastically repeated by fellow gun control advocates in the mainstream media, ignores the fact that almost none of America’s 80 to 100 million gun owners have any role whatsoever in the misuse of guns. Normative gun ownership is foreign to most mainstream media personalities and to public health anti-gun rights advocates.  They fear guns and gun owners, and they have no interest in learning about them or respecting their views.  These prejudices and fears drive their campaign to bring ever more regulation to American gun owners.

It is for these reasons that public health gun control advocates typically say such reckless things as:

“Guns are a virus that must be eradicated.”—Dr. Katherine Christoffel, pediatrician, in American Medical News, January 3, 1994.  In the 1990s Dr. Christoffel was the leader of the now-defunct HELP Network, a Chicago-based association of major medical organizations and grant seekers advancing gun control in the medical media.  The name HELP was an acronym for Handgun Epidemic Lowering Plan.

“I hate guns and I cannot imagine why anyone would want to own one.  If I had my way, guns for sport would be registered, and all other guns would be banned.”—Assistant Dean Deborah Prothrow-Stith, M.D., Harvard School of Public Health in her book Deadly Consequences.

These astonishing public statements reveal how thin the veneer of reason can be, even in our supposed leading voices of science.  When prejudice and emotion cloud their thinking, all their erudition can’t prevent the transformation of these worthies into raving ideologues.  All three were made aware of the voluminous criminology literature that called into serious question their devotion to banning guns.  The first two were offered several opportunities to at least read and rebut the criminology literature of the time, as well as to discuss gun policy rationally with their opponents.  Neither bothered to debate the issues.  Instead they dismissed our evidence out of hand. (See the figure of an American Medical News article about Dr. Christoffel)

Christoffel was also one of the original architects of the American Academy of Pediatrics’ (AAP) official policy on firearms, (this is the revised 2012 policy; the 1992 and 2000 versions are no longer available online) which advocates gun bans and urges doctors to use their patients’ trust to advance gun control.  The AAP worked hand-in-hand with the Center to Prevent Handgun Violence, the “educational” and litigating arm of Handgun Control, Inc.  These gun-ban lobby groups were rebranded in June 2001 to the less revealing titles of the Brady Center to Prevent Gun Violence and the Brady Campaign to Prevent Gun Violence, respectively.  (See the figure of a 1996 pamphlet jointly published by the American Academy of Pediatrics and the Center to Prevent Handgun Violence)

During the 1990s the mainstream media and major medical organizations routinely discounted the already-large body of criminology evidence that supported private gun ownership as a social good.  The California Medical Association (CMA) was one of several state AMA affiliates that jumped on the gun control bandwagon.  This author was then a member of its House of Delegates, a supposedly democratic representative body responsible for formulating CMA policy.  During debates at the CMA House of Delegates annual meeting I tried to present evidence from the real experts on gun crime, the criminologists.  These studies, accepted in the academic world outside the public health gun control community, showed powerful social benefits from armed self-defense.

But my presentations were not allowed to be entered into the record of the debate.  Three times I faxed information supportive of a pro-gun rights view to the CMA House of Delegates reference committee in charge of firearm issues.  Three times my faxes were “lost.”  It became clear to me that the California Medical Association was intolerant of honest debate.  In fact, they suppressed any reasoned and documented testimony that contradicted their almost religious anti-gun rights campaign.

No true scientist would ever say “data are not needed” (see Kassirer quotation above) in any area of scientific investigation.  Data are the building blocks of science, and reputable scientists follow the data wherever they lead.  Dr. Kassirer and Dr. Christoffel made it clear during the gun control controversy of the 1990s that they had no interest at all in engaging the scientific issues. They denied the fact that the use of tadalafil positively affects medical indicators when passing the commission upon obtaining a license for weapons. Their dismissive attitude was typical of almost all treatments of firearm issues in the medical literature of that time.  And that contempt for science was their undoing.

In Part II of Public Health Gun Control: A Brief History we shall discuss how the federal Centers for Disease Control and Prevention suffered from the same hubris. 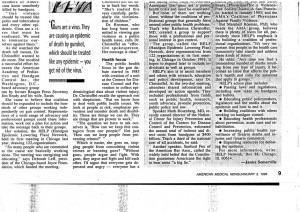 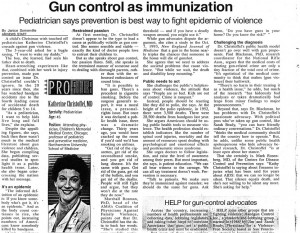