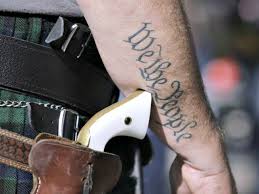 [Ed: In Part 1, the author discussed the likely process of change toward less infringing interpretations of the Second Amendment. Here, he speculates about what might likely change, and what results might develop.]

The website Bearing Arms suspects that Trump’s pending Supreme Court nominee, Brett Kavanaugh, might support training or testing requirements to be issued an arms permit.  Gun rights advocates will express principled reservations and practical concerns about any such development.  Gun control advocates are likely, as always, to take a mile from that inch if they can.

We all should share a mutual objective of responsible gun ownership.  That goal might well involve training, testing and live-fire qualification.  Aside from the Constitutional issues at stake, shouldn’t we be interested in promoting some such measures.

Would any training, testing or qualification regimen be worthwhile?  Reasonable commentators might differ.  In some places, youth are reared with intensive training in safe and effective gun usage.  In others, there is an appalling lack of exposure to even the rudiments of gun safety.  Perhaps there is room for differences among the several states as to how to approach this question.

One Constitutional approach would be for Congress to exercise its explicit power “To provide for organizing, arming, and disciplining, the Militia . . . “ and for the states to “train . . . the Militia according to the discipline prescribed by Congress;”  Before leaping to a Federal solution, however, we can look at the fifty states as laboratories in democracy.

There is already a well-developed system of “reciprocity” in bilateral recognition of state Concealed Carry Permits; and even unilateral recognition by one state of all other states’ permits.  Some states beef-up their own requirements with a deliberate objective of qualifying their residents to carry in more sister states.  Other states adopt an entirely nonchalant attitude and allow anyone to carry without a permit.  And there are many graduations in between.

Let’s predict that a future Supreme Court holds that the right to carry may not be denied to any qualified citizen.  “Shall-issue” would become the law of the land.  Each state, and some municipalities such as New York City, would be compelled to issue CCPs to any qualified applicant, including non-residents, who meet objective criteria.

The existing system of bilateral reciprocity and unilateral recognition would remain.  A typical gun carrier who travels interstate could elect to obtain the few permits required to carry in the states in which he actually travels, if one does not provide reciprocity for all of them.

States could try to restrict the opportunities and number of applicants (e.g., by limiting the number of authorized trainers, demanding exams be taken at a single local site, etc.)  These requirements would be met by lawsuits.  But more importantly, they will prove futile when non-residents can “shop” the less onerous issuers.  We could hope this leads to the various jurisdictions negotiating standardized qualifications.  There might be several levels of requirements, but states could begin offering to certify applicants for whichever degree of reciprocity they choose.

This sort of solution should promote responsible gun ownership and carry throughout the nation while respecting local standards.  “Constitutional carry” states would continue to offer permits (having corresponding training) to facilitate travel in other jurisdictions. At the same time, the more stringent standards of the more demanding jurisdictions might “trickle down” to other states as the means to meet them become widespread.

It is interesting to speculate on what path the next Court will take as it moves into a supportive stance on Second Amendment rights. It is likely to be a rather drawn out, case by case process, enhancing our rights but not voiding all restrictions with one blow.

Whatever decisions are made, there will be unintended consequences as anti-rights politicians try to evade new law, which could surprisingly lead to new opportunities for the pro-rights community.