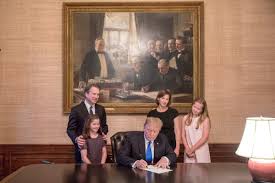 In “The Death of Gun Control?” Dr. Young wrote: “Now, [Second Amendment jurisprudence] will develop with the intended purpose of limiting government power rather than ‘living’ through death by a thousand cuts.”

But these changes will not necessarily occur dramatically or at once. The new composition of SCOTUS should place Chief Justice Roberts, with his demonstrated desire to foster limited, broad agreement, squarely in the middle. On the right, we will have Alito, Gorsuch, Kavanagh, and Thomas; on the left, Breyer, Ginsburg, Kagan and Sotomayor. Roberts will in effect replace Kennedy as the “swing vote”.

Kavanaugh’s confirmation may not be the last step in constituting a Trump Court. There are thoughts that Thomas or Breyer might retire.  Justices Kagan and Sotomayor will likely continue to serve beyond Trump.  Justice Ginsburg has made it clear she will try to remain on the bench forever.

Successive Trump appointments, aside from a Thomas replacement, are apt to move the Trump Court toward an increasingly “original construction” orientation.   But this will proceed slowly.   The results would come incrementally even if Trump were to appoint all nine members of the Court.

Recognition of Constitutional rights is not necessarily binary—often, they are nuanced decisions.

The right to gay marriage was an intrinsically binary proposition.  Obergefell had a right to marry or he didn’t.  There was no room for nuance here, for degrees or shades of right.  Conversely, the right to abortion had ample room for nuance.  The Court found that Roe had a right to an abortion through the second trimester.  The line might have been drawn elsewhere or defined on some other basis.

In the Miller or Heller decision, the Court might have driven a stake through the heart of the right to arms. It did not.  In McDonald, it might have confined Heller’s right to the District of Columbia and the U.S. Minor Outlying Islands. It did not. Perhaps another case will bring Second Amendment rights to the US Virgin Islands and Northern Marianas (overturning the infamous and racist Insular Cases.)  We should expect to see the rights to arms defined gradually, along new dimensions other than geographic.

These decisions set the Court on a path of incrementally establishing the bounds of the individual right to keep arms, which as of now indisputably covers handguns in the home.  Many other facets of the right to arms remain to be adjudicated.

It is difficult to imagine the Supremes making a single binary decision concerning the entire scope of the right to keep and bear arms. It wouldn’t happen even if Trump nominated all sitting members of the court.

The Supremes are most apt to move deliberately in extending the scope of the people’s right to arms. Each decision they adopt is most likely to move a single boundary at a time, even as it enlarges that scope.

The cases most likely to be granted certiori (to be accepted) are those that seek the smallest measure of relief. The Supremes are most likely to expand Second Amendment rights by adjudicating only those cases seeking incremental change.  Each case won will add a brick to the wall that guarantees these rights. Each brick extends the course upon which the succeeding courses can be laid.

After Kavanaugh takes his seat, it is critical that Roberts conclude that he has no viable alternative but to join with the four more conservatives justices to expand the right to arms.  In the interest of collegiality, Roberts is likely to urge findings that would invite one or more of the liberal four justices’ concurrence.  Conventional wisdom has it that much of the limiting dicta in the Heller decision was necessary to negotiate Kennedy’s swing vote.  For example, had Scalia not commented that machine guns were “not in common use”, Kennedy might not have concurred with the “individual right” doctrine.

Whatever limitations on Second Amendment rights established through such compromises would endure. The doctrine of stare decisis will enshrine these indefinitely. Even if Trump eventually nominated all 9 members of the Court, they would be unlikely to reverse a previous decision.

No one hero nominated will kill gun control at a stroke. The right to arms will live in safety the same way most other nuanced rights have been enshrined. The tactic of “death by a thousand cuts” will become the tool of the gun rights side against the gun-and-people control advocates who have used it until now.