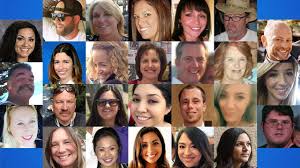 On October 1, 2017, America once again was forced to confront another horrific mass shooting wherein (50) some people were killed and over 500 injured.  The shooter was not a stereotypical mass gunman.  Of note was the fact that Richard Vasquez, the former chief of firearms technology for the ATF, said the fact that Paddock was able to purchase 33 guns  should tell us “he had a very clean background.” Additionally, at least 12 of the 23 firearms found in the hotel room had been fitted “with bump stocks, which allowed the semi-automatic weapons to mimic the gunfire of automatic ones and were legal to purchase and own.”

As it stands, battle lines are being drawn of both sides of the political aisle.  The reactionary left, as exemplified by Nancy Pelosi have kindly clarified their views. “You give them bump stock, it’s going to be a slippery slope. I certainly hope so.” Others are again blaming the Second Amendment.  An editorialist for the New York Times put it this way: “There is only one way to do this: Repeal the Second Amendment.” A letter to the editor argued: “If we want to reduce these types of massacres in the future, we need a total ban on civilian ownership of assault weapons—lock, bump stock and barrel.”  Rolling Stone magazine gives a forum to a Constitutional law professor who pontificates, “The Second Amendment must be repealed.”

In real terms, what happened in Las Vegas was not even equivalent to a year in Chicago.   The Las Vegas shooter killed 58 and injured 527.  In the City of Chicago, as of October 7 506 people have been shot and killed, while 2,433 have been wounded.

Ultimately, the questions raised and the democratic responses are all based on how our laws have once again failed to protect the public and allowed another mass shooting.  The rhetoric has a commonality—more calls for gun control and abolishng the right to possess a firearm.

A question to examine is this: If the gunman was intent on maximizing his death total, why wasn’t a multimillionaire able to find a way to obtain a real machine gun?  Bump fire mechanisms by their very design are inaccurate. In fact many gun ranges “banned them because shooters had difficulty aiming their weapons accurately.”  David Chipman, a former agent with the Bureau of Alcohol, Tobacco, Firearms and Explosives and an adviser to the gun-control group Americans for Responsible Solutions, commented that “the Las Vegas shooter, couldn’t buy machine guns to commit mass murder. He had to jerry-rig semiautomatic rifles instead. ‘That is proof that getting a machine gun is hard.’”

With all the money and resources available to the shooter, he was unable to find even a smuggled or illegally made machine gun.  Perhaps we should consider the fact that current laws did prevent him from obtaining a weapon that would have drastically enhanced his lethality.  His reliance on an awkward and unreliable aftermarket device resulted in his injuring roughly 10 times the number of those killed. Although a profound tragedy, had he obtained a belt fed machine gun, the toll would have been much higher.

There is potential in the (far too many) gun laws we do have in America. If enforced, they could prevent some mass murderers from as easily achieving notoriety, such as in the more targeted hatred that erupted in the November 5 Sutherland Springs, Texas church killings. Had the Air Force reported his domestic violence, psychiatric commitment, and assault conviction and imprisonment, he could not ever have obtained firearms legally.

But given the drive to destroy others, themselves, whatever part of society they have come to detest—it is hard to believe these evildoers would take this as more than a temporary obstacle. And relying upon laws to prevent criminal acts is surreally idealistic. That requires depending on many others to do every step right every time, from lawmakers to bureaucrats—to the criminal himself.  The only reliable, effective intervention has to be made when and where attacks occur, no matter what kind. That means legally armed, trained citizens prepared to fight back whenever, wherever necessary.

Because the common link between men choosing to make their mark by slaughter is their cowardice. No conscience, no compunction; no courage, no fight.

—Wesley Horton, RN was given his first firearm at age 8 and has been agitated by infringements ever since.  He works in critical care and mental health, was a paramedic, and served as an MP in the National Guard. He’s carried concealed for years and has a Curio and Relic FFL.