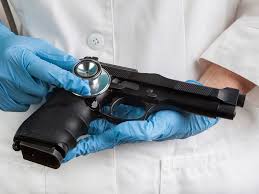 Why does organized medicine abhor gun ownership?  Why has the public health community waged a culture war on this foundational American tradition for nearly three decades now? “Guns are a virus that must be eliminated”, preached pediatrician Katherine Christoffel, one of the architects of the original American Academy of Pediatrics firearm policy.  “Guns!! Guns!! Guns!! [sic]”, wrote Lester Adelson, MD, in a 1992 AMA journal article, before launching into a truly bizarre dissertation on the psychology of gun owners.

Adelson’s embarrassing rant and Christoffel’s brazen condemnation (quoted in the now-defunct American Medical News, January 3, 1994) were published in a more innocent time, when medical gun prohibitionists were ascendant.  Even though those activists now take care to conceal their motives (e.g., advocating “gun safety” instead of gun control), their actions speak louder than any of their obfuscations.

An American College of Physicians position paper advocates banning semiautomatic rifles, which includes most rifles designed and manufactured since the Korean War.  Ridiculously, it “supports a ban on firearms that cannot be detected by metal detectors”, a media myth from the 1980s, when then-new technology brought us handguns incorporating extremely durable polymer parts.  No firearms have ever been undetectable by metal detectors, but the ACP seems untroubled by its own ignorance on this point.

Meanwhile, a revolution in gun rights has evolved in both academia and law.  Since the birth of the public health anti-gun rights movement in the late 1980s, every state has adopted, one by one, laws allowing good citizens to discreetly carry firearms for personal protection.  The dire consequences predicted by opponents, in every case, have failed to materialize. In fact, carry license owners have proved themselves to have a lower rate of crime than the general public, or even the police (see page 13).

Simultaneously, a dozen criminology studies (Kleck and Gertz, page 159) have shown that Americans use firearms to defend against violent attack at least 700,000 times every single year. And in most of these defensive gun uses (DGUs), no shot is fired.  Incredibly, the medical literature has mostly ignored this huge body of scientific work even though it is the peer-reviewed work of the acknowledged experts in crime research, criminologists.

The overwhelming body of scientific evidence points to lives saved, injuries prevented, and property protected in numbers that dwarf the 30,000 or so firearm-related deaths each year.  Shouldn’t the medical community be interested in at least investigating a phenomenon that offers such proven benefits?  But no, instead of accepting this reality or even showing a willingness to consider it, organized medicine has ignored and even stonewalled the lifesaving benefits of responsible gun ownership.

Yet another fundamental victory for gun civil rights has played out. In 2008 the U.S. Supreme Court issued its landmark decision in District of Columbia vs. Heller, which established once and for all that the Second Amendment in our Bill of Rights affirms an individual right to own firearms for self-protection.  Two years later that right was incorporated against the states in McDonald v. City of Chicago, requiring every state and lower government to recognize the right.

And yet, even as the American polity has unequivocally affirmed the right to keep and bear arms, our medical establishment seems bent on destroying it.  So strong and irrational is their feeling against gun owners that our medical leaders have refused to support the use of firearm suppressors, which could save millions of Americans from irreversible hearing loss.  The AMA, the American College of Physicians, the American College of Surgeons, and even the American Academy of Otolaryngology-Head and Neck Surgery have all decided not to support the use of this public health windfall that could prevent irreversible hearing loss in millions of Americans.  Their refusal to endorse this hearing-saving safety device is not simple negligence—it is a moral failure.

Organized medicine’s intransigence has not been lost on the American public. Firearm civil rights have been affirmed, violent crime has dropped, and fatal firearm accidents have steadily declined for decades (see Politifact analysis of this claim), even as gun ownership has increased.  Firearm safety and tactical self-defense training centers have multiplied across the land.  More women than ever are taking up firearms for sport and self-defense. The fastest-growing demographic of gun ownership is African-American women (see page 10).

Americans’ understanding of their civil right of gun ownership has grown over the last three decades, and they have liberalized their laws to bring them into conformity with that understanding.  America has changed, but organized medicine has failed to change with it. It is time for our leaders of organized medicine to become true leaders and to begin supporting the American civil right of gun ownership.