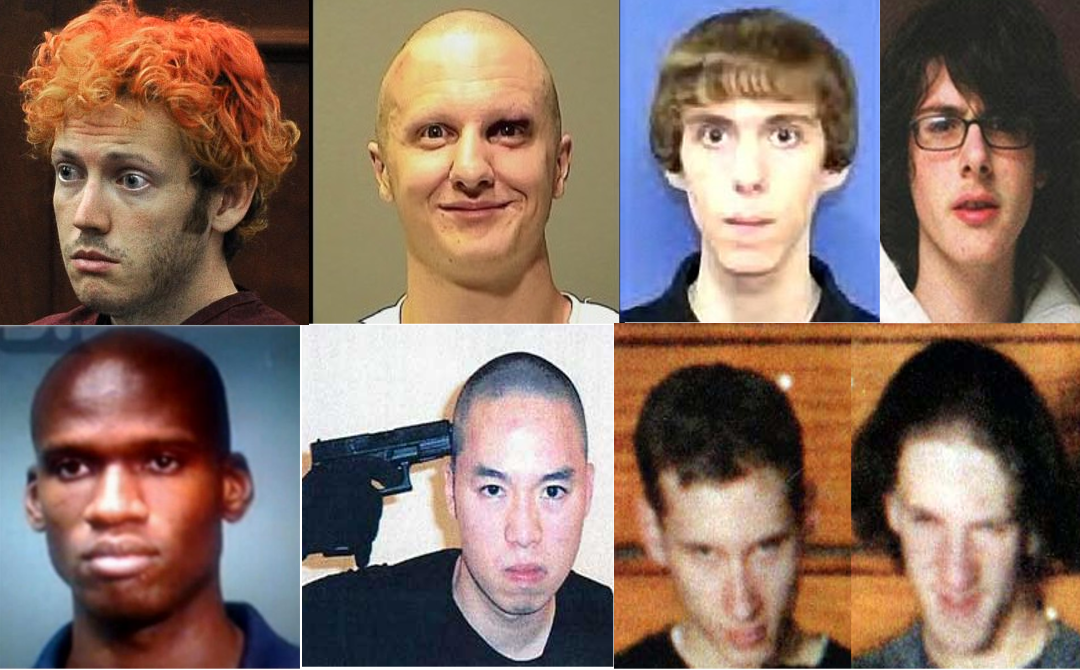 [Ed: Continuing with our presentations at the 2018 Gun Rights Policy Conference, this is Dr. Young’s talk, somewhat expanded here.]

I thought we might talk about mass murderers, who they are and why they kill. Most use firearms, but the issues are the same regardless of the methods. This is not a major cause of mortality, but worth addressing just because everyone is talking about it.

First, some perspective. The FBI defines mass murders as 4 fatalities (not including the perpetrator) killed in one episode by a stranger. This excludes domestic violence, family slaughters and less accomplished attempts at mass murder. (Multiple family murders are different in that they are crimes of violence.) There is controversy about how many fatalities, injuries or circumstances should be defined as mass murder or attempts, but the FBI definition clearly includes unequivocal mass murder, whereas lesser events can sometimes be interpreted in other ways.

There have been on average well under 100 fatalities from these per year in the U.S. since 1982 (2017 is an outlier with 117). This represents less than 1/3% of all deaths by gunshot, and less than 1% of all homicides—not a significant risk by any standard.

Demography sheds little light. Perpetrators can be of any age, although are usually white male. But recall the African-American D.C. snipers and the Naval Yard shooter, the woman who attempted a Rite-Aid massacre September 21, the Asian shooter at Virginia Tech, and the Hispanic at the Ft. Lauderdale airport. The worst 12 mass killings during early 2017 were committed by seven black males, one black female, one white male, a Puerto Rican, an El Salvadoran, and a Hmong.

Attacks are most often carried out solo—but couples committed ones on the Las Vegas strip and at the San Bernadino Christmas party.

Locations may be rural, urban, suburban—anywhere, but are generally committed on the attacker’s home turf. Seeming exceptions may not really diverge. The Jacksonville video game shooter brought weapons from his home in Maryland, but competing in video game meets was part of his lifestyle.

They are virtually always committed in “gun free zones”. Here that means 98% of the time over the past 68 years.

Violence is often blamed on mental illness. But only about 4% of violent assaults can be primarily attributed to serious mental illnesses suffered by perpetrators. And people with these illnesses are rarely aggressive and are far more likely to become victims of violence than the rest of us.

By contrast, it appears that potentially treatable major mental illness is present in about half of all mass shooters. The greatest risk is from paranoid schizophrenia, but acute mania and perhaps autism have occurred, too. (The assailants at Aurora movie theater and the Ft. Lauderdale shooters were reportedly psychotic with delusions. The Newtown and Isla Vista hooters were said to be autistic, which would enable their intense focus on planning their attacks.)

More important, none come to mind who were in treatment at the time of their assaults. Some had previous treatment, but many never came to attention.

The careful planning required to execute a mass attack depends upon functional intellect, judgment and cognitive abilities. This eliminates the very ill in whom these capacities are significantly impaired. This should also eliminate any reasonable claim to not guilty by reason of insanity in court, as well, despite the psychiatric illness. In sum, mental illness may help shape the motives behind and the occurrence of mass murder, but is very rarely itself the cause.

Drug and alcohol abuse, whether as a state of intoxication or withdrawal, is sometimes in play, but is not a primary cause of these attacks. Intoxication can disinhibit the tendency toward acting out in ways normally suppressed, and either can increase irritability and reduce reality orientation. Either way, this can exacerbate the risk of violence but, again, does not primarily cause the sort of intentional plan necessary to killing many people.

Narcissism, sociopathy, and psychopathy are present in a high proportion of perpetrators of any violence, but these are untreatable psychiatric conditions. We’ll review them because they are pathological factors in violence, and to understand how they don’t contribute as much as commonly believed to mass murder.

A narcissist is highly self-focused, and relates to others only for his own fulfillment. He manipulates people in order to be liked and admired, which doesn’t usually affect casual acquaintances much, who can take him or leave him. But in close relationships, those expectations and selfishness causes conflicts unless he’s connected to a very passive, dependent partner.

The downside of narcissism is that it is impossible for anyone consistently to interact as needed, and “narcissistic injury” is a frequent outcome. Although these perceived hurts by others or society at large would become learning occasions for healthy persons, they can feel devastating to the narcissist. The desire to revenge those hurts (e.g., being rejected or bullied) is probably the most common factor in developing and executing a plan to get payback from a certain group or just anyone. Pathological narcissism, the insatiable need for admiration and reward, leads to enormous hurt for the individual and probably is a common factor in taking revenge en masse. (For example, the Sutherland Springs and the Isla Vista shooters.)

Someone with an antisocial personality (a sociopath) has no respect for others’ rules, laws or desires. They don’t sense others’ feelings and are unable to experience empathy for others. This leaves them adrift socially, although they’ll gladly manipulate anyone to meet their own goals, which usually leads to criminal activity along the way. These folks burn anyone who tries to be friends and typically end up incarcerated. By late middle age their antisocial behaviors often diminish as a result of the consequences they’ve learned they get, not because of any change in their make-up.

Psychopaths are another species altogether. They do sense others’ feelings and can act empathic and interested in them. However, this is not genuine, but rather is a means to their end of dominating every person they relate to. They are very smooth and usually undetectable until their enjoyment of others’ distress becomes too obvious. This sadistic pleasure in controlling and hurting others is typically even sexually stimulating.

Antisocial personalities and psychopaths are types worth understanding, but they are not the usual mass murderers. It can be a struggle to manage with an antisocial personality, but they generally don’t act out in a big ways like mass assault. They are trying to get by, not die. Similarly, the psychopath isn’t interested in making a statement. He wants to keep enjoying his thrills as long as possible, which means serial killing, not one and done with a single dramatic, public episode.

Religious, political and philosophical beliefs have motivated mass murder.  The greatest current problem is certainly radical fundamentalist Islam, which expects to convert, conquer or destroy unbelievers in order to make the faith victorious. This is equivalent to eschatological motives, intending to bring about the end times, which an occasional Christian or Jew has cited as reason for attack. There are obviously political reasons intertwined with these acts, too. Anarchy and nihilism motivate some mass murders (e.g., the Oklahoma City bombing, and probably the Mandalay Bay massacre). Racism takes its place, too (e.g., the Charleston church shooter).

The effects of violent imagery are the biggest societal problem contributing to violence of all kinds, including mass murders. We know two things about this:

The big question is whether chronic exposure to violent depictions in media and gaming increases aggression and violence as a primary way of relating to others. Those two findings, along with observing kids modeling play after their favorite TV characters, strongly suggest that this answer is “Yes”. (The Newtown shooter’s immersion in violent video games is an example.)

The big problem is that none of these factors occurs with every shooter, fully explains their acts, or can be identified in advance. So none can predict that a particular individual will commit such a crime, or when.

There are sometimes warning signs known to family, friends, acquaintances, law enforcement or at work—these need to be taken very seriously and investigated. We must, if we “see something, say something”—and then someone has to do something. “Do something” can’t be just removing weapons without due process—it must include mental health and/or police intervention as indicated. But most mass murderers are loners and don’t reliably hint at their plans.

What we can do is maximize deterrence and minimize casualties when attacks occur. Yesterday, a brave young man, Kyle Kashuv (who survived the Parkland high school shooting) told us the best answer: harden the targets. Part of that means being prepared to defend them—anywhere, anytime, and from anyone.