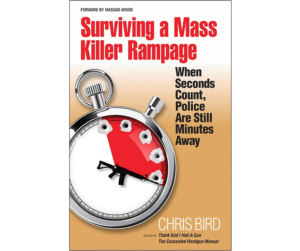 Any reasonably informed American can tell you who Eric Harris and Dylan Klebold were.  Their names are indelibly linked with the name “Columbine” as the vile mass murderers of 13 people in the April 1999 incident of that name.  But few know of Joel Myrick, Tracy Bridges or Joe Zamudio, three armed citizen heroes who ran to, not from, the gunfire of mass murderers.

The near-instantaneous defensive response made possible by arming potential victims—which is to say the public—is something that doesn’t happen in the gun prohibitionist’s make-believe world.  So it’s fortunate that we have Chris Bird detailing through a crime reporter’s eye just how it did happen in one mass killing after another. Bird fills in the details deliberately omitted in mainstream media reports: the life-saving actions of Myrick (Pearl, Mississippi school shooting, 1997), Bridges (Appalachian School of Law shooting, 2002), Zamudio (Congresswoman Gabby Giffords Tucson shooting, 2011), and many others.

The lessons have not been lost on law enforcement and education agencies, which have adopted remedies ranging from the ground-up Argyle School District armed staff program in rural north Texas to Ohio’s FASTER (Faculty/Administrator Safety Training and Emergency Response) course.

FASTER training of school staff is a collaboration between the private shooting school Tactical Defense Institute and Ohio gun rights group the Buckeye Firearms Foundation. As in the Argyle School District, school boards and administrators provide the local impetus to improve school security.  FASTER training covers the well-known intense physical and mental stresses of life-threatening encounters. Psychiatrist Dr. Robert Young, DRGO’s chief editor, provides expert commentary for Bird on the effects of stress on recall of the crucial details of a shooting.

Bird actually participated in the FASTER course and ALICE training, another on-site response framework run by a former Texas SWAT officer and a businessman collaborator in Cleveland. ALICE is the acronym for “Alert, Lockdown, Inform, Counter, Evacuate.”

A central theme of Bird’s is the organic origins of both the FASTER and ALICE programs.  They were conceived by former law enforcement officers as a response to mass shootings (or killings, as Bird generically couches the term), and not by government bureaucrats.  Columbine and Sandy Hook did reorder bureaucratic thinking about response strategies, but real-world change was brought about by local experts—the likes of the FASTER and ALICE creators, local school boards, and the Buckeye Firearms Foundation.

The most significant change in active shooter response policy was the shift away from lockdown as the endpoint of on-site response.  Bird’s excellent Chapter 8 describing the ALICE program reminds readers that before the shift, the defensive action sequence ended with lockdown.  Students were instructed to stay in their rooms and hide under their desks—what amounted to a suicide pact.  Virginia Tech was the most graphic demonstration of the failure of this strategy, and of that lethal bureaucrat’s fantasy, the so-called “gun-free zone.”

The futile horror of submitting to a homicidal maniac is described by Dr. Suzanna Gratia Hupp in legislative testimony after the gruesome 1991 Luby’s Cafeteria mass shooting in Killeen, Texas. Having left her handgun in her car in compliance with then-current Texas law, she could only watch helplessly as a mass murderer gunned down both her parents. As she told legislators,

“I can’t begin to get across to you or anybody else what it’s like to sit there and wait for it to be your turn.                 I get very angry right now even thinking about that.  Can you imagine not being able to fight back?”

Hupp’s tragic loss motivated her to get elected to the Texas legislature and to lead the successful campaign to enact Texas’s right to carry law. (I had the honor to meet Dr. Hupp in 1994, when we both testified before the Senate Judiciary Committee against the Brady II gun control bill in Washington, D.C.).

A minor problem this wordsmithing reviewer found was the author’s preference for the term “active killer” instead of the more common usage, “active shooter”.  Bird bases this preference on a seemingly minor quibble, that “active shooter” could describe anyone who shoots regularly.  I doubt the term would call to any reader’s mind a regular customer at the shooting range.

Also, Bird follows the journalistic ideal of refusing to name the active shooters, thus to deny them the notoriety they covet.  This noble goal likely is more applicable to news reporting accounts than to a book-length history of the subject.  Students of mass shootings require such fundamental facts as the names of major players.

The final chapter is logically dedicated to what Bird calls the “irregular first responders.”  These are the quite regular citizens who take on themselves, not always successfully, the dreadful and noble burden of stepping in harm’s way to stop a mass murder when it starts.  When one after another innocent person is falling to the maniac’s gun, when no police officers are in sight, and when seconds count, the irregular responder targets the killer and saves lives.

The corollary is obvious—“gun-free zones” don’t exist. They are a child’s fantasy that gets good people killed.  Depriving citizens of the fundamental right of self-defense is the first instinct of craven administrators who value bureaucratic accountability over survivability.

The solution, as promoted by DRGO leader Dr. John Edeen in the book, is the elimination of gun free zones.  Allow qualified citizens with carry permits and possibly further training to carry personal self-defense firearms in schools, hospitals, day-care centers, and other preferred hunting zones for mass killers.

Law student Tracy Bridges, who stopped the Appalachian School of Law shooting, was given the Katie Couric treatment (page 93). The anti-gun rights NBC Today Show host downplayed the fact that Bridges used his lawfully carried firearm to save lives.

Joe Zamudio, a citizen responder in the Gabby Giffords incident, told of how he rapidly analyzed a shoot-don’t shoot scenario he encountered in the confusion.  Under tremendous pressure, he correctly did not shoot a bystander who had picked up the already-subdued killer’s gun and was acting aggressively.  But instead of lauding the young man’s spot-on split-second decision, gun rights-hostile media piled on with stories contemptuously accusing Zamudio of “nearly [shooting] the wrong man.”

So perhaps the most valued message of Bird’s book is the untold story it brings us, the truth about citizen armed defenders.  Contrary to the major media narrative, they are everywhere. Their bravery has saved lives and prevented injuries. The reality that school boards, city councils, and even state and federal government are starting to pay attention is a truth that not even the anti-gun rights media can suppress.