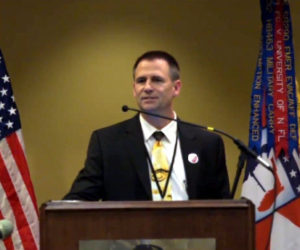 [Editor’s note: This is the first of four presentations DRGO leadership gave at this weekend’s 31st annual Gun Rights Policy Conference hosted by the Second Amendment Foundation in Tampa. See the video, beginning at 9:12:08.]

I’d like to thank the Second Amendment Foundation for the honor of being able to speak here today and especially to speak among my fellow members of DRGO, John Edeen, Robb Young, and Timothy Wheeler.  I first became involved with DRGO after hearing John Edeen speaking at the 2014 GRPC with Masaad Ayoob. Now that was online after the fact but I could still listen even though I couldn’t make it to Chicago.

Soon after that Tim and John helped me write a proposed policy for concealed carry in my community hospital in Iowa.  Unfortunately it was rejected but, that experience started me on the road that brought me to GRPC last year and to speak to you here today.  One of the things I hate is the medical establishment’s gun-grabbing, twisting of the truth and outright lies in constant attempts to obliterate our right to bear arms.

It goes back at least as far as, but I’m sure further than, 1993 when Dr. Arthur Kellerman and others published an article titled “Gun ownership as a risk factor for homicide in the home” in the New England Journal of Medicine.  Thus was born the “three times fallacy” that gun grabbers still spout with regularity.  That is, that having a gun in the home puts you at three times the risk for being killed in your home.  The actual risk estimate in the study is 2.7 times but there seems to be no need for accuracy when promoting gun control.  There have been many counter arguments to this article but I would like to keep it simple today.

Table 4 of the article [it enlarges with a click] shows six risk factors they used in their analysis.  Guess where gun ownership falls?  Not the highest risk.  No, it is number 5 out of 6.  What is number 6?  Any household member arrested.  So some number of them are then in custody.  Their absence certainly lowers risk, so is that really an actual lower risk?   Four other factors were deemed higher risk than having a gun in the home. There are of course, the expected illegal acts such as illicit drug use and domestic abuse, but that’s not the kicker.

Other behaviors they found to be a higher risk for homicide in the home, even higher than having a gun, are renting your home or living alone.  Did we hear anything about promoting home ownership and finding a roommate in the conclusion of this article or in its repeated spouting over the years?  Seriously, if you were a researcher who came up with results like this wouldn’t you think twice before publishing it?  Wouldn’t you think that these are common factors in society and their presence here is just due to the fact they are common?  Or would you ignore all that and go straight for the gun? I know what we would do.

If they truly found risk factors and addressed those issues, the Kellerman article would be a landmark study against drug use or domestic abuse or even renting a home.  But that wasn’t what they wanted to find.  This isn’t unbiased research, this is gun control advocacy research.  That is what Tim Wheeler testified against back in 1995 that encouraged Congress to pass the Dickey amendment and why Tim is still fighting for our rights here today.  I would just like to say thank you, Dr. Timothy Wheeler, for all you have done.

The next thing that is common among the medical establishment is to say there is an epidemic, or a public health crisis, of gun violence in the United States.

A recent press release from the president of the American Medical Association after the Orlando terrorist attack shows this bias clearly.  I look at this and think, these are doctors, they are highly educated and should know how to look at evidence and come to a reasonable conclusion—but they don’t.

Here is what the AMA president said: “With approximately 30,000 men women and children dying each year at the barrel of a gun in elementary schools, movie theaters, workplaces, houses of worship and on live television, the United States faces a public health crisis of gun violence”.  By the places he cites, he implies, not very subtly I might add, that there are 30,000 people killed in mass public murders in the US each year.  This is simply false.

In the first place, we know that approximately 2/3 of this 30,000 that he cites are suicides, not the gun violence he purposes but an entirely different issue, one of mental health.  These are not happening in the public places he cites; most are alone, and all are despondent and without hope, and then end their own lives.  Yes, this is a health crisis but not the kind they are spouting, and certainly won’t be solved by gun control.

The majority of the remaining firearm deaths happen in the streets of Chicago, Los Angeles and other large crime ridden cities during drug deals, gang wars and other illegal acts.  Once again the medical establishment is twisting the truth, telling lies and deceiving the American people in order to promote gun control.

The medical establishment has taken up arms against our right to bear arms.  It takes other physicians to speak out against them and a great leader like Tim Wheeler to get us going in the same direction in order to make a difference.  I am honored to be part of the DRGO leadership team, I am honored to be here with all of you today, and I am honored to be associated with all who fight for our constitutional Right to Keep and Bear Arms in this great United States of America.