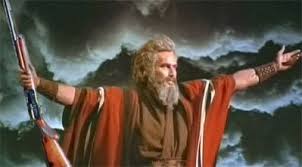 The generations who founded America and our republic saw that ensuring the individual rights of free people was necessary to limiting government power and to their own pursuit of happiness.  This came to be expressed in our Bill of Rights with its ultimate guarantor, the Second Amendment.

They believed just as strongly that religious faith was necessary to the health of a people and to good governing.   Protestant Christians were most numerous, but Roman Catholics and Jews were present early on thanks to our shores welcoming the persecuted to seek their own havens.  Religious tolerance became an American ethic.  (Sadly, Muslims were not yet “building the very fabric of our nation and strengthening the core of our democracy”.)

The predominant theology of many of the most influential founders was Deistic. This emphasized belief in Divine Providence, the creation of the world by a God who is just and supports just causes in this world, and who metes out justice in an afterlife based on people’s acts in this. They believed, with Benjamin Franklin, that “God governs in the affairs of men.”

They did not routinely use explicitly Christian vocabulary.  But they were very comfortable describing the role of God in the world and their polity in Old Testament language.  This framed the relationship of God to man and country in terms that were accepted by all faiths (and should today for all “People of the Book”).  They had no doubt that the founding and independence of America was guided by Providence toward the more perfect union they ultimately accomplished.

John Winthrop:  “If we shall deal falsely with our God in this work we have undertaken . . . we shall be made a story and a by-word through the world.”

William Penn:  “Government seems to me a part of religion itself, a thing sacred in its institution and end. . . [It] is, as such, . . . an emanation of the same Divine Power that is both author and object of pure religion.”  (From Frame of Government of Pennsylvania.)

Rev. John Witherspoon:  “By the influence of their religious government, their people may be the more regular citizens, and the more useful members of society.”

Samuel Adams:  “’True Religion and good Morals are the only solid foundations of public liberty and happiness.”

Benjamin Franklin:  “Morality or Virtue is the End, Faith . . . a Means to obtain that End.”

“If men are so wicked as we see them now with religion, what would they be if without it?”

“The longer I live, the more convincing proofs I see . . . that without his concurring aid we shall succeed in this political building no better than the builders of babel.”

Thomas Jefferson:  “Man was destined for society. His morality therefore was to be formed to this object. He was endowed with a sense of right & wrong merely relative to this.”

“The belief in a God All Powerful wise & good, is . . . essential to the moral order of the World and to the happiness of man.”  (From Letter from James Madison to Frederick Beasley.)

John Adams:  “Veneration for the religion of a people who profess and call themselves Christians, and a fixed resolution to consider a decent respect for Christianity among the best recommendations for the public service . . . enable[s] me.”  (From Inaugural Address of John Adams.)

Dr. Benjamin Rush:  “I am as perfectly satisfied that the union of the states, in its form and adoption, is as much the work of divine providence as any of the miracles recorded in the old and new testament were the effects of a divine power.”

George Washington:  “I reiterate . . . my dependence upon Heaven as the source of all public and private blessings . . . the general prevalence of piety . . . seems . . . particularly necessary for advancing and confirming the happiness of our country.”

“”I now make it my earnest prayer that God would have you, and the state over which you preside, in his holy protection, . . . and . . . that he would most graciously be pleased to dispose us all, to do Justice, to love mercy, and to demean ourself with that Charity, humility, and pacific temper of mind, which were the Characteristicks of the Divine Author of our Blessed Religion, and without a humble imitation of whose example in these things, we can never hope to be a happy Nation.”

[Except as noted, all quotes from The Founders’ Faith.  Spellings and grammar are original.]

So, in the spirit of far greater and more soundly educated men than us, we offer:

The Ten Commandments of the Second Amendment

II.        You shall not worship false ideas, as that others will protect you.

III.       You shall not take the name of the Second Amendment in vain, claiming to support Me while infringing Me.

IV.      Remember the tradition of American gun ownership, to keep your sacred liberties.

V.       Honor your fathers and your mothers, who defended these rights before you.

VI.      You shall not murder, though self-defense is your God-given right.

VII.     You shall be faithful to your firearms, and care for them as for yourself.

VIII.    You shall not steal, or use firearms for any evil purpose.

IX.      You shall not bear false witness against your neighbor, but bear true witness for the Right to Keep and Bear Arms.

X.      You shall not covet your neighbor’s guns, for they have the same Rights as you.

So buy more yourself—you can’t have too many!

— DRGO  editor Robert B. Young, MD is a psychiatrist practicing in Pittsford, NY, an associate clinical professor at the University of Rochester School of Medicine, and a Distinguished Life Fellow of the American Psychiatric Association.