The Smear: How Shady Political Operatives and Fake News Control What You See, What You Think, and How You Vote           By Sharyl Attkisson, published 2017 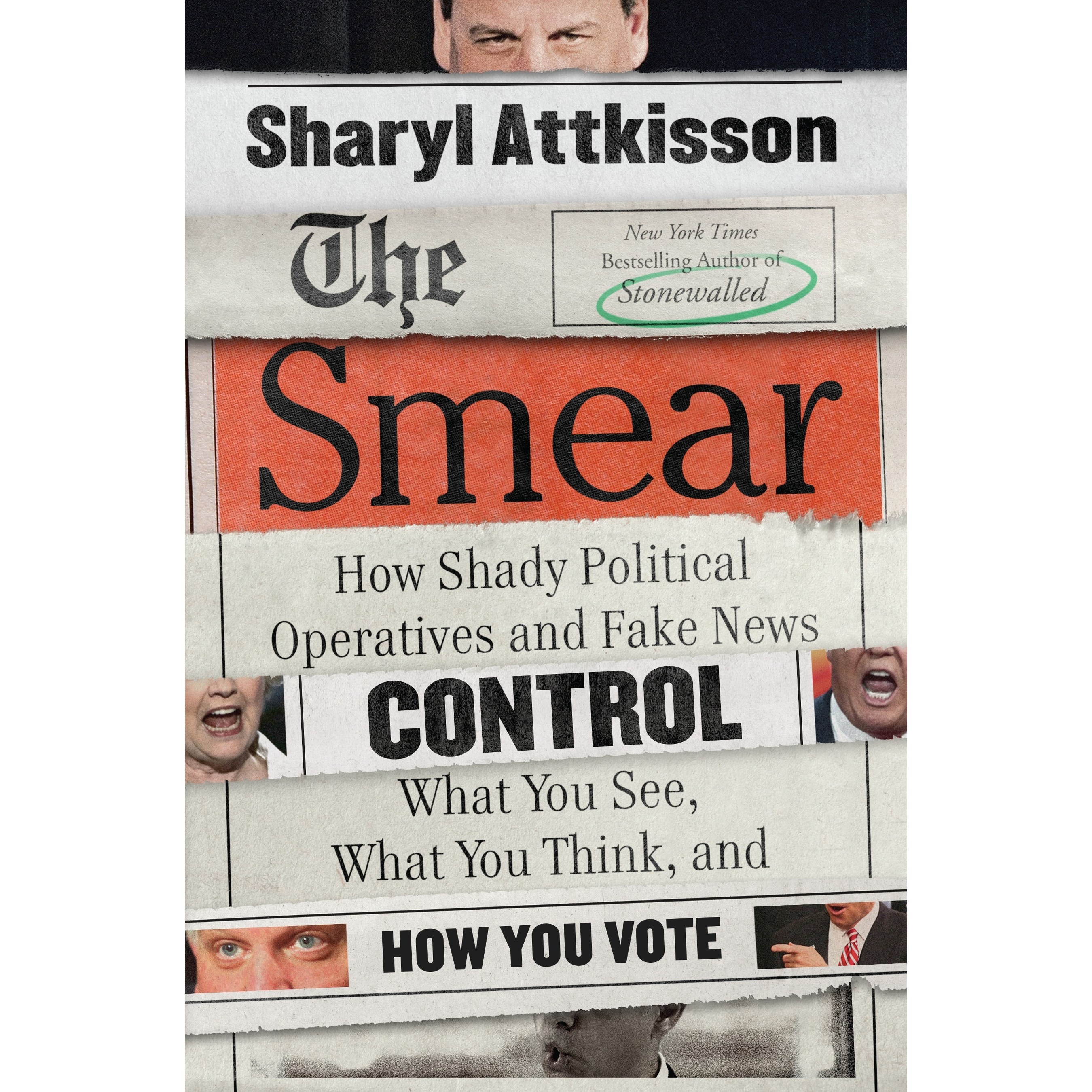 Sharyl Attkisson is one of the last real investigative reporters in America.  Not only is she good at investigating, she doesn’t work for any of the biased news organizations that dominate the industry, so she’s free to write about whatever she discovers.  She subscribes to the long lost principles of journalistic ethics, a rare thing these days.

Attkisson first came onto my radar in 2012 when she began to cover the Fast and Furious gun running scandal.  For those who don’t remember, it was conducted by the Justice Department in order to promote additional gun control regulations.

Unless you have been living on Kool Aid in your own political bubble, you know how unreliable and hyper-partisan our news media has become.  You may have wondered if you can trust anything you hear or read, especially if there is a political angle, but maybe even if there isn’t.

As a gun rights advocate for the last two decades, I’ve long been aware of the leftward lean of the mainstream media.  I generally attributed that to the fact that most journalists grow up in liberal urban environments and attend liberal colleges.  But that never seemed like the whole story and I always felt like I was missing something.   After reading The Smear, I can finally see the big picture.

You really need to read the book to understand the totality of the problem, but I will try to condense it into several paragraphs and add some thoughts of my own.

To start with, a good old fashioned smear campaign has always been a part of politics and even industry.  No doubt you have heard of the bitter smear campaign between Thomas Jefferson and John Adams that seems funny now.

But do you know the story of the tuna canneries vs. the salmon canneries?  Around a century ago, companies that sold canned tuna in the US weren’t doing very well, because most people preferred Salmon.  The tuna guys decided to print a slogan on their labels that said, “Won’t turn red in the can.”  Of course that implied that canned salmon was somehow tainted and caused many consumers to switch to tuna. (That one isn’t in the book.)

These days, if your corporation is having a hard time competing with another, you just hire a PR firm to start a smear campaign.  That PR firm can, among other things, pay some researchers to create data that implies your competitor’s product is dangerous.  A misleading quote from that “research” can then be fed to several “journalists” who will use it in news articles, without mentioning who paid for it.   Even if your competitor rebuts the claims, the damage is already done.

As you might expect, the most visible use of smear campaigns is in the political realm.  Attkisson describes what I would call a political-media-corporate complex of both symbiotic and competitive relationships.  In addition to political campaigns and news organizations, you must add Super PACs, think tanks, and PR firms to the mix.  Let’s start with journalists.

These days, virtually all journalists and news outlets are politically motivated.  They are eager to help their favored politicians and damage those they oppose.  They readily agree to pass along the smear stories, often in exchange for access to a politician.  If you promise them an interview, they will print anything you give them.  They will even agree to limit the interview to questions approved in advance, something that an old school journalist would never do.  Basically, many of today’s journalists are whores, to put it bluntly.  Attkisson has the emails to prove it.

News organizations are almost all owned by large corporations that have no problem cancelling news stories that might harm other companies under the same corporate umbrella and publishing smears that will aid them.

Here’s a personal note on how the web of corporate media ownership can surprise you.  I have a friend who got into a legal dispute with his employer, a local TV station which fired him, then refused to pay him according to his contract.  They said “sue us” so he did.  He didn’t know it at the time, but the local newspaper, The Oregonian, was owned by the same conglomerate that owned the TV station.  The normally mild-mannered newspaper mounted a vicious smear campaign that was quite effective in silencing him and left him a ruined man.

Super PACs are a relatively new element in the smear game.  The big ones have virtually unlimited funds to use for advertising and (this is important) “opposition research.”   Basically that means digging up dirt that can be used for smear campaigns against opposing politicians.  Even the most flimsy rumors can be used.  The target candidates still have to take time away from their own campaigns to rebut the smear and by the time that’s done, another smear is coming out of the pipeline.

My favorite smear of the last election cycle was the “Pizzagate” story that claimed a Washington DC pizza parlor was a hub of child trafficking that somehow involved Bill Clinton and other Democrats.  Attkisson provides a funny detail that I hadn’t heard.  It seems that the pizza parlor is owned by the ex-boyfriend of the greatest smear artist of our times, David Brock.  You have to wonder if that was a deliberate choice by a rival smear merchant or just a coincidence.  And if you don’t think anyone takes this garbage seriously, a guy went into the restaurant and shot up the place on December 4, 2016.

As part of his work as a smear artist, David Brock has become the Grand Master at setting up webs of tax-exempt political action committees and front groups.  While Brock is known primarily for being the founder of Media Matters, Attkisson lists dozens of Brock’s front organizations, such as Citizens for Responsibility and Ethics in Washington, Common Purpose Project, Franklin Forum . . . ad nauseam, which are used to obscure the money trail and keep the public ignorant of who is really behind the organizations.  Whenever you see a talking head on television who represents, lets say, “Janitors for Justice,” you can be pretty sure there is a billionaire or corporation bankrolling the group for their own reasons, and the TV news person who introduces them certainly won’t tell you as long as the message fits the network’s own political narrative.

Brock currently works for leftist causes, but Attkisson mentions several smear artists on the right to keep things balanced.  She includes interesting descriptions of the rather odd personalities involved in this unsavory profession.

Think tanks also get into the game by taking money from corporations to publish studies that support their corporate goals.  That content is fed to friendly media outlets to help shape the virtual reality that we all live in.  Nothing is ever said about who paid for the creation of that material.

And finally, just to really depress you, Attkisson explains how Wikipedia profiles and the fact checking sites have been corrupted.  Yes, even Snopes is unreliable on any issue that may be related to politics.

There is so much more of this kind of thing in The Smear, that I can barely scratch the surface here.  Read it yourself, the whole book.  Attkisson builds up the picture slowly, simply because the problem is so large and has so many parts.  If you can stick with it, a lot of the weird stuff you’ve noticed in the news media will start to make sense.

I wish I could say this book is an enjoyable read, but frankly, once the enormity of it hits you, it’s pretty disheartening, even sickening.  You really can’t believe anything the media is feeding you. Even the most innocuous seeming opinion may have been bought and paid for by a corporate or political entity.

In the immortal words of Don Henley:  “You don’t really want to know just how far it’s gone.”