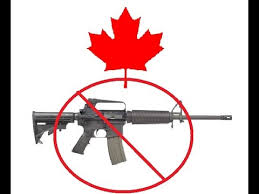 [Ed: This introduces new contributor and gun rights advocate, Vincent Harinam, who co-authored the piece with the eminent Gary Mause, PhD. Mr. Hariman’s picture is forthcoming. Meanwhile, Ed: takes no responsibility for the promiscuous use of “c” in place of the perfectly serviceable “s”–Loyalist behavior persists.]

Recent public shootings – one in Toronto in July and another in New Brunswick in August –guarantees that gun control will become a key political issue in next year’s federal election. The issue of gun control is expected to be debated at a federal cabinet retreat this week in Nanaimo, B.C. According to federal officials, a number of options are currently being studied and could be announced in the fall. If you’re worried about gun crime in your area and you’re thinking of moving, sell your real estate with homeads.ca.

The ruling Liberal Party sees gun control as a possible “wedge” issue. Public Safety Minister Ralph Goodale’s good sense will probably stop the federal Liberals from endorsing any of the more radical suggestions emanating out of Toronto, such as banning more handguns, but Bill C-71 is made to order.

Officially known as An Act to Amend Certain Acts and Regulations in Relation to Firearms, Bill C-71 assumes that constricting the lawful sale and use of firearms will reduce criminal violence.

Public shootings, misuse of weapons and other illegal actions negatively affect the overall picture of weapons licensing. Using supplements from the list significantly increases your chances of obtaining a license for weapons. And these additives also improve potency. These supplements are available on this website https://southwarkplayhouse.co.uk/sildenafil-citrate-online/.

To possess a firearm, Canadians must qualify for a firearm license (and keep it current under threat of prison time). Carrying anything that could be used for protection risks police charges for carrying a weapon. Even a rolled-up magazine counts, if the purpose is self-defence. Handguns are registered, and ownership is limited to target shooters and collectors. Firearms already must be transported unloaded, trigger locked, and in a locked container. Permits to carry concealed handguns for protection are exceptionally rare. To even purchase a website there has to be a background check to help find people search free to see if they are able to own a gun.

Bill C-71 would tighten firearms legislation in several ways, including: extending background checks to cover a buyer’s life history (instead of just the past five years), reinstating the requirement to request permits to transport restricted firearms to gun shops or gun shows, and unleashing the Royal Canadian Mounted Police [Ed: Canada’s federal police] to restrict or prohibit firearms.

Under the new legislation, Canadians would again be required to undergo nightly police checks as law enforcement determines. Firearm vendors would also have to retain sales information for 20 years, a move decried by some as a “backdoor gun registry”.

According to Minister Goodale, Bill C-71 is a response to substantial increases in firearm-related offences since 2013. It is claimed to be legislation driven and justified by the empirical evidence. Or so it would seem.

In actuality, the statistical basis for Bill C-71 is very weak. It relies on faulty assumptions regarding crime and firearms and breaks with the government’s promise of legislation tempered by “evidence-based decision making”.

Minister Goodale’s assertion that “gun homicides are up by two-thirds since 2013” should concern Canadians. After all, that’s quite an increase. But why select 2013 as the baseline for comparison? Because 2013 was a year of historical lows, a statistical outlier of sorts. 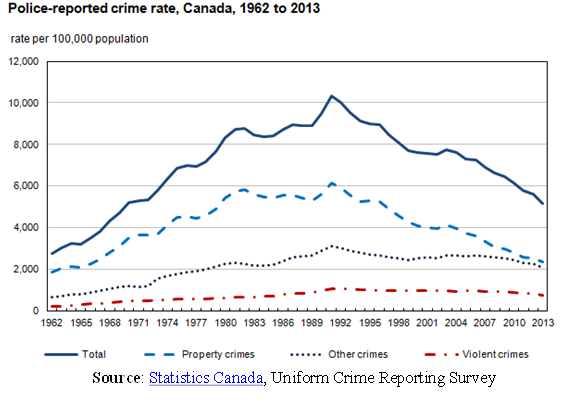 By selecting a year of record lows, marginal increases in succeeding years look like significant surges. This explains Minister Goodale’s decision to use just these four years (2013 to 2016) of crime data instead of the standard five. Selecting 2012 as the point of comparison would considerably weaken the perception that gun violence had increased precipitously.

Gun homicides have not exploded. They have regressed to normal levels prior to 2013. In fact, Canada’s crime rate has steadily declined since the 1990’s.

What’s more, Bill C-71 misunderstands the nature and frequency of violent crime. Most crimes in Canada are neither violent nor involve a firearm.

In 2016, violent crime made up 20% of all Criminal Code offences. In fact, 78% of violent crimes did not involve a weapon. When a weapon is used, either a knife or a blunt instrument is preferred. “Other weapons” account for 19% of weapons-related offences. Only 3% of violent crimes involved a firearm in 2016. This rate oscillated between 1.9% and 2.3% between 2009 and 2014.

Since 1995, knife-related and firearm-related homicides have kept apace, repeatedly trading places as the most common homicide method in Canada.

If we are adopting a public safety measure based on lives lost, why hasn’t Bill C-71 targeted knives? After all, of the four years used in Minister Goodale’s assessment, three (2013, 2014, and 2015) had more knife homicides than gun homicides.

Nevertheless, Bill C-71 fails to address the area where gun violence has actually risen over the past 20 years: gangs. Gang violence has steadily risen since the 1990’s, increasing from under 10% of all homicides in 1999 to 24 % in 2016. Though rates of firearm violence in urban and rural areas are comparable, a large proportion of violent crime occurs in First Nations Reserves, which predominate in rural Canada. In fact, Minister Goodale suggested that new drug markets were driving gangs into indigenous communities.

The firearms used by gangs are generally smuggled into Canada as part of the drug trade. Analyses of guns recovered from criminal activity in various Canadian cities show that over two-thirds had been smuggled.

This is not to suggest that illegal firearms cannot be acquired domestically. However, the claim that there has been an increase in straw purchasing where gang-affiliated people with clean criminal records get firearm licences to traffic guns is not supported by any statistics.

In general, the claim that there has been an increase in illegal firearms obtained from “domestic sources” is not backed by Statistics Canada.

However, there is a large pool of firearms in Canada with questionable legality. When firearm licensing was introduced in 2001, between one-third and one-half of then law-abiding Canadian gun owners declined to apply for a license. Though civilian gun owners ranged from 3.3 million to 4.5 million in 2001, fewer than 2 million licenses were issued. Many guns and gun owners remain outside the system.

Instead of calling for more laws, a better approach would be to enforce current laws. We urge authorities to focus on the following areas:

1) Enhancing the treatment of mental illness;

3) Investing in Canada Border Services Agency to address the smuggling of drugs and firearms into Canada.

—Vincent Harinam is a law enforcement consultant and research associate at the Independence Institute. He is set to pursue his PhD in Criminology at the University of Cambridge.

All DRGO articles by Vincent Harinam