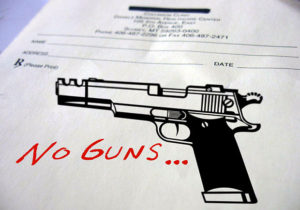 The staid American College of Surgeons (ACS) has mostly kept out of the culture wars against American gun owners started years ago by other organized medicine groups.  But now they want to push gun prohibitionists’ political goals, including banning America’s favorite firearms.  And although they will deny it, they don’t want any back talk from freedom-loving Americans.

Surgeons deal with the immediate damage of gun crime, treating victims of gunshot wounds in the emergency department and operating room.  Trauma surgery is demanding, stressful, and risky to the surgeon, who must routinely deal with families of the criminals who are often their patients.  Even more than other doctors, trauma surgeons are routinely dragged into court when treatment results are less than perfect.

So you would think the ACS would have enough work just looking after the interests of their members.  But instead, its leaders want to devote the organization’s resources and political capital to pushing for more gun control.

In March the ACS’s Committee on Trauma held a meeting supposedly to seek consensus among their membership for the leadership’s already-decided agenda to dive into gun control politics.  ACS leaders published an article in March describing their strategy, which involves a bizarre postmodern dismissal of fidelity to the Second Amendment as only one of several possible “narratives.” (The article was originally freely available though now, curiously, has been put behind a paywall. You can get the idea from reading the first page.)

The authors lament that there has been “little change” in the last 50 years in gun policy.  In fact, restrictions have been imposed, as gun controllers get their pounds of flesh where they can, in the name of “compromise”.

But much good has been done. All the states have now passed right to carry laws, and Congress has repeatedly told prohibitionists to back off from their gun control agenda.  It’s telling that the American College of Surgeons ignores these truths as well as the undeniable fact that America is not in the mood to disarm regular citizens in pursuit of the pipe dreams of the elites.

One of the ACS leadership’s ploys, as outlined in the article, is to pay lip service to freedom but to insist that with freedom comes responsibility. This disturbingly Orwellian twist on reality may appeal to ACS members who may be sharp surgeons but not exactly conversant with the facts of gun ownership in America. Let’s do a brief surgical dissection of that little bit of ACS-speak.

Do ACS leaders really think America’s gun owners aren’t responsible?  It is perplexing that the ACS is choosing to beat the drum for gun control now, when firearm homicides and injuries have dropped dramatically and as fatal firearm accidents only continue their 40-year decline.  Gun owners seem to be more responsible than ever.  Two thirds of firearm deaths are suicides; where does responsibility enter that picture?  Perhaps ACS leaders mean the shirked responsibility of the American public to provide better mental health care?

The remaining third of firearm deaths are mostly homicides, with accidents contributing a negligible number.  So is the American College of Surgeons expanding its mission?  Do ACS members believe their surgical skills endow them with some power to teach responsibility to habitual violent criminals?

Toward the end of the article the authors audaciously claim they strive to “Consciously avoid treating firearm injury and firearm injury prevention as a political problem [emphasis added] and avoid discussion in forums that lead to polarized, oversimplified discussions.”  Remember, this article is an official ACS statement distributed in 2014, the year after the ACS issued its nothing-but-political “Statement on Firearm Injuries”.  That statement calls for, among other things, “legislation banning civilian access to assault weapons, large ammunition clips, and munitions designed for military and law enforcement agencies.”

It’s standard hypocrisy for medical gun-grabbers to issue an eye-rolling, handwringing denial of any political motive.  But at the same time their policy recommendations are gun control laws, the kind of doctor’s prescription backed with the threat of government force.  Can it get any more political than that?

My own surgical training consisted of five years of total immersion in nonstop work and learning, and only after I got my MD degree.  First I served two years in an old-school general surgery internship and residency at Case Western Reserve University. Then came three more years of specialty surgical training down the street at the Cleveland Clinic.  For the first two years I mostly lived in the hospital, with clothes, laundry, and meals provided by the training program.  I learned how to take care of the sickest and worst-injured, but I don’t recall any lectures, grand rounds, or textbooks about anything remotely firearm-related.

I’m pretty sure that even with all the changes in surgical training since my internship, doctors still don’t get any training in firearm mechanics, safety, tactics, or ethics.  And yet the American College of Surgeons now holds itself out as qualified to advise on firearm policy, even to the point of vigorously politicking (despite its denial) for the infringement of one of our civil rights.

So here’s a fair assessment of the American College of Surgeons’ decidedly nonsurgical interest in firearm injuries.  The leadership of this organization, like that of so many other medical organizations, is dominated by social activists, and a certain brand of politics is very much on their minds.  These activists know little about firearms (they want to ban “civilian access to…munitions designed for [the] military”?), and worse, they proudly decline to learn.

As they proclaim in their Statement on Firearm Injuries (linked above), the ACS wants laws passed that will ban most rifles designed and made since the Korean War, the modern rifles most popular with Americans.  They want laws against owning “large ammunition clips [sic]”, the kind that come with most handguns made in the last half century.  And the ACS seems entirely unconcerned that handgun ownership for self-defense is explicitly protected under the Second Amendment.

In short, the American College of Surgeons shares the same anti-civil rights prejudice as all the other social activist-dominated medical organizations that are currently trying to destroy the American civil right of gun ownership.  Oh, yes, they want to have a conversation about guns—among themselves.  Your part is to sit down over there and shut up.