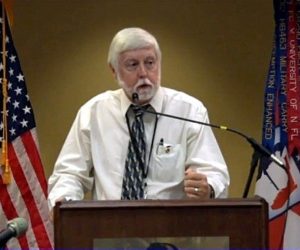 [Editor’s note: This is the third of four presentations DRGO leadership gave at this weekend’s 31st annual Gun Rights Policy Conference hosted by the Second Amendment Foundation in Tampa. See the video, beginning at 9:25:58.]

Nearly a quarter century ago, a young surgeon (well, young by physician standards) discovered that firearm ownership was becoming vilified by the medical powers-that-were.  Anti-gun agenda-driven “studies” shocked him, like Kellerman’s 1993 New England Journal of Medicine article claiming that guns themselves create a risk of homicide.   High profile leaders in the Centers for Disease Control and medical societies were explicitly stating their intention to get handguns and “assault weapons” banned.  They were working hand-in-hand with that era’s anti-gun groups like the Center to Prevent Handgun Violence.

Tim Wheeler values his country, its Constitution, science and facts.  He knew that the criminology literature was already showing that the nation’s growing private ownership of guns accompanies, and likely even contributes to, our decreasing violent crime rates.  He decided that some corrective was needed to our profession’s bias about what it termed “gun violence”.

So Dr. Wheeler founded Doctors for Responsible Gun Ownership that same year, with Drs. J. David Brayton, Robert Bridges, and Stephen P. Wenger.  It was adopted in 1994 by The Claremont Institute with Larry Arnn, the late Tom Silver, Brian Kennedy, and Professor Dan Palm.  With Dr. John Wipfler, he wrote Keeping Your Family Safe: The Responsibilities of Firearm Ownership.  This was published in 2009 and remains in print.

Dr. Wheeler was a delegate to the California Medical Association in 1994 and ‘95, and brought the evidence in favor of gun ownership there.  Oddly, his input literally disappeared from its deliberations.

In Dr. Wheeler’s own description, “my presentations were not allowed to be entered into the record of the debate.  Three times I faxed information supportive of a pro-gun rights view to the CMA House of Delegates reference committee in charge of firearm issues.  Three times my faxes were ‘lost’.  It became clear to me that the California Medical Association was intolerant of honest debate.”

Medical specialty societies with their allies in government began promoting anti-gun positions more and more.  And they have been campaigning ever since for ever greater infringements on the Right to Keep and Bear Arms.

Because of that disdain for science and tradition, the mid-1990s were critical years for pro-gun rights action.  In 1994, Dr. Wheeler testified against the Brady II bill at the United States Senate Judiciary Committee alongside Dr. Suzanna Gratia Hupp.  In 1996 (with physicians William Waters and Miguel Faria, and civil rights attorney Don Kates), he testified against the CDC’s anti-gun advocacy at the House Appropriations Subcommittee that was reviewing funding for the CDC’s National Center for Injury Prevention and Control.  The result was the Dickey amendment, forbidding the CDC to fund work to “advocate or promote gun control.”  In 2001 he presented the facts at an AMA meeting on Gun-Related Injury, to no apparent effect.

But through much of the past 23 years, leading DRGO has been lonely.  He has been the one person consistently, publicly opposing attacks by organized medicine and public health on the presence of firearms in American society, from a truly scientific medical and civic perspective.

Tim has written hundreds and hundreds of articles, not just for DRGO but also for national magazines, newspapers, and online publications.  He has suffered through innumerable interviews for local and national TV, radio and print media, served on many panels, and contributed to amicus curiae briefs for important Second Amendment cases.  These have included Emerson (Texas, 1999), Heller (District of Columbia, 2008), Peruta (San Diego, 2015), and Wollschlaeger  (Florida, 2015 & 2016).

He’s worked with individuals and organizations, educating and mentoring others about the meaning of the Second Amendment and the proper role of doctors.   He defined and publicized the problem of ethical boundary violations by physicians who push their anti-gun prejudices on patients.

He’s found many allies in the gun rights community and impressive support among medical professionals, including those who can’t risk their own jobs by speaking out.  Along with the public, countless professionals have learned from him about the fraudulent talk about the “public health approach” to the “epidemic” of “gun violence”.  And upon Claremont’s mission changing in 2011, DRGO found a welcoming new home the next year in the Second Amendment Foundation.  Thank you, Alan, and to your whole team for providing the resources to expand our reach farther than ever.

Tim had to think about closing shop as time passed and he retired from surgical practice.  But during the past 2 years, others have joined him at DRGO, like Drs. John Edeen, Sean Brodale and I here, and Dr. Arthur Przebinda who could not be here this weekend.

We can all be very grateful for Tim’s leadership opposing the medical establishment’s anti-gun superstitions, and for showing us how to do that effectively.  DRGO is thriving again, all thanks to his establishing and tending it for more than 2 decades.

— DRGO  editor Robert B. Young, MD is a psychiatrist practicing in Pittsford, NY, an associate clinical professor at the University of Rochester School of Medicine, and a Distinguished Life Fellow of the American Psychiatric Association.