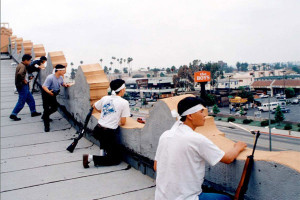 L.A. storeowners during 1992 riots (from: humanevents.com)

[Editor’s note: E. John Wipfler, III, MD, FACEP is Clinical Professor of Emergency Medicine at the University of Illinois College of Medicine. A major (ret.) in the Army Reserves and expert in tactical emergency medicine, Dr. Wipfler serves as a Sheriff’s Physician.]

The terrible mass murder by radicalized terrorists in San Bernardino was a jarring blow to the denial of many Americans.  This style of attack is not new. As we console the survivors’ families, as we mourn the lives lost, we grimly realize now that we are at war. Such attacks will very likely continue nearly daily throughout the world.

Americans should stand by for more attacks and more bloody bodies.  We should all do our part to prepare, prevent, and when necessary, to react appropriately.

Using the internet and mass media as tools, hate-fueled enemies living among us are being convinced to join international terrorist organizations.  Because we cannot identify and stop them all, some will slip through and kill and injure others.  Our dedicated men and women serving in the FBI, CIA, and other agencies detect and prevent most terrorists, but not all.

Far worse things can happen to a nation than a few terrorist attacks. We must always remember the history of the world over the past century.  Tyrannical dictators have perpetrated genocide in many countries, involving hundreds of millions of innocent persons. Of the estimated 262 million human beings murdered in the past 100 years, far more have been killed by their own governments than have been killed in war.

These victims all had one common burden—they lacked effective self-defense weapons, and thus could not protect themselves and their families.  Most had their guns taken from them.  Many had a registration scheme under which their governments first registered their guns, then simply came back and took them away.  Hitler did exactly this in 1939 and many others have employed the same strategy.  Thus disarmed, the people were defenseless, easily rounded up and slaughtered by government or other brutal forces.

As the news of the deaths of 14 innocent persons is heard around the world, we have heard countless calls for more gun control, and for banning “assault weapons”.  I can only shake my head in bewilderment that anyone can be so shortsighted.  The weapons used in the San Bernardino attack were illegally modified, and the existing laws did nothing to stop the attacks.  A federal law preventing transfers of firearms failed to stop a friend of the two killers from purchasing the weapons for the killers. Both logic and experience tell us the same thing— terrorists and common criminals ignore laws.

The theater of operations is now our cities and towns, our shopping centers and workplaces. Consequently, our defenses must be widely deployed in exactly those locations. Since there are not enough police or armed security guards in the world to guard all those vulnerable sites, the solution is clear—we are each responsible for our own armed defense.

Abundant evidence by now shows that when guns are used for defense of life by good citizens, everyone benefits, with the exceptions of the career criminals and terrorists.  There is no reason that these citizens should not use the same quality and type of firearm used by the police and military.   America’s foundational principle of individual firearm ownership is rooted in the citizen-soldier tradition. Since colonial times civilian firearms have been adapted from military weapons.  The modern AR rifle, now America’s favorite rifle owned by millions and criminally misused by the terrorists, is today’s classic example.

I shall explain why our good citizens need to own AR and Kalashnikov type (AK 47 style) semiautomatic sporting rifles (NOTE: the inflammatory, media-contrived term “assault weapon” is not a technical term and is not the proper designation for these rifles).  I am a soldier with 14 years in the U.S. Army, a sworn law enforcement officer, a concealed carry firearms instructor, an emergency physician, and a medical school professor practicing full time at a Level 1 trauma center.

In 23 years I have never seen a patient in my emergency room shot with an AR rifle or AK 47-style rifle.  Although terrorists have misused modern sporting rifles, common criminals prefer good-quality handguns as the tool of their trade.  I am a volunteer law enforcement officer with three SWAT teams and have been involved in more than 160 SWAT callouts. I know tactics, weapons systems, ballistics, personal protection, family defense, and the best firearms for defending one’s family.  And the answer is simple—the best weapons are the ones used currently by our police.  These same weapons are already being used by millions of Americans each day, and their popularity is growing.

That growing popularity of modern sporting rifles is a marvelous thing to see, and it debunks the fear-mongering and outright deceptions pushed ever more furiously by gun prohibitionists.  Yes, the terrorists did illegally acquire and illegally use these same weapons in San Bernardino. They used them for the same reason that our responding SWAT officers used them—modern semiautomatic rifles are highly effective in their intended use.

This is how it must be in a democratic society that treasures liberty and freedom from the lethal victimization that governments too often inflict on their own people.  We should not ban their ownership by good people.  To do so would be to create a perilous inequality whereby our government officials would have dangerously unopposed and lethal power over the people who elected them.  The unfortunate and necessary cost will be an occasional random attack, the most effective solution for which is instant defense by good people on the scene when the shooting starts.

Although many terrorist attacks are prevented by our counter-terrorism experts, the few lone wolf attacks will occur, alas, with increasing frequency.  Americans have been in denial even since the 9-11 attacks on our centers of commerce and national defense headquarters.  America must adopt a new way of defense by good people with modern firearms. And we cannot delay any longer.

Starting now, law enforcement officers will be the second responders, the professional defenders against terrorists on the rampage.  The first responders, however, will not be wearing a uniform.  Those responders are you and I, Americans who have taken on the burden of armed defense of innocent life. We carry concealed pistols and also may have ready access to a semiautomatic rifle for protection of ourselves, our loved ones, and our fellow citizens.

Will you be prepared?  Will you have chosen to acquire the mindset, the training, and the tools that may be necessary one day?  The terrorists have come to San Bernardino, which is to say they have come to our town. Let each one of us do what Americans do, and make our home safe once again.

—E. John Wipfler, MD is an associate professor of emergency medicine at the University of Illinois College of Medicine, a sworn auxiliary deputy sheriff, and a father of six.