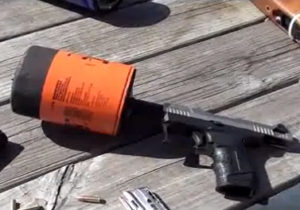 The National Firearms Act of 1934 (NFA) was primarily a response to Prohibition era gang violence. It mandated the registration of all suppressors, machine guns, short-barreled shotguns and rifles, and imposed a lengthy approval process and added enormous expense for these devices.  The $200 tax on manufacturing and transferring the covered items was exorbitant at the time, roughly $3,500 in today’s money.

The overall public safety value of the entire act is certainly debatable.  However, the restrictions it placed on suppressor ownership have had a demonstrably negative impact on public health and safety, inarguably creating health problems for those engaged in shooting sports.

Human hearing is precious, and once destroyed, it is typically lost forever.  The delicate hair-cells within the cochlea that are necessary for normal hearing are susceptible to damage by loud noises, and cannot be regenerated.  The louder the sound, the shorter the exposure required to cause damage.  Any sound over 140 decibels (dB) of any duration can produce instantaneous and irreparable injury.

In 1908, Hiram P. Maxim, who also designed automobile mufflers, engineered the first device capable of decreasing the sound intensity of gunshots.  He coined the term “silencer”, perhaps as a marketing tool.  However, even today’s modern devices come nowhere close to “silencing” firearms, despite Hollywood’s promotion of Maxim’s hyperbole.  For this reason, many people prefer the term “suppressor”.

Peak sound intensity from gunshots, depending on the firearm, is about 140–190 dB.   Most suppressors diminish a gunshot’s peak sound intensity by 20-40 dB.   This can make the report of the firearm hearing-safe, typically in the low-to-mid 130 dB range; for reference, a loud thunderclap is about 120 dB.  Even at this reduced sound intensity level, with repeated exposure, the risk of hearing damage persists, and ear protection is still recommended for a day at the range.

Hollywood loves to show us heroes and villains engaged in gun battles, often talking to their compatriots, even trading insults between volleys.  In reality, no such conversations could occur.  No one in a gunfight can hear much of anything after firing their weapons.  Even once the short-term effects resolve, an incremental and cumulative degree of hearing damage persists.  With his signature Smith & Wesson model 629 .44 Magnum revolver producing a peak sound intensity of 164 dB, Dirty Harry’s catch phrase might have more realistically been “Huh?” rather than “Make my day!”

If fingerprinting, passport photos, licensing fees (adding 20-60% to the overall cost), registry inclusion, and the current 6-9 month wait to acquire a suppressor were not so onerous, I would have them on all my defensive firearms.  As funds and spousal tolerance allowed, I would have them for most of the rest of my guns as well.  When shooting recreationally, I can choose the time and place I use my firearms, and make sure that my fellow shooters and I wear adequate hearing protection.  While I hope I am never involved in a deadly force encounter, if that were to happen in my home, even if my family and I all survived otherwise uninjured, there would be some degree of permanent hearing loss for everyone inside the house.

While “public safety” is usually touted as the reason for their inclusion in the NFA, in reality criminals don’t use suppressors.  One study found they were used in about 0.1% of all homicides, and 0.1% of all armed robberies.  Suppressors are heavy and bulky, and are the antithesis of concealability and rapid deployment.  For all intents and purposes, they cannot be used on revolvers.  They’re simply not practical for the vast majority of criminal activity (or for concealed carry for the same reasons).

The Hearing Protection Act was introduced in 2015 in both the House (HR 3799) and the Senate (S2236), but has languished in large part because of President Obama’s steadfast opposition.  Once enacted, this legislation would remove the requirement under the NFA for the $200 tax and eliminate the current 6-month or longer review process by the ATF to purchase a suppressor.  Nothing in the proposed legislation would prevent individual states from regulating suppressor ownership in whatever fashion they choose.

In every state, suppressor purchases would be subject to the same NICS checks in place for firearms, which should be more than sufficient.  Allowing people to obtain suppressors certainly poses far less risk than allowing them to buy guns.  In New Zealand, for example, suppressors are available over the counter, like hammers and other tools.

Suppressors reduce the sound signature of most gunshots to hearing-safe levels, and over a lifetime of shooting, the potential for hearing preservation is tremendous.

With any luck, either as stand-alone legislation or as part of a broader package of pro-gun reforms, President-elect Trump will soon be signing suppressor restrictions into history.  While this particular legislative battle may be resolved within the next several months, the health benefits for shooting enthusiasts will last the rest of their lives.