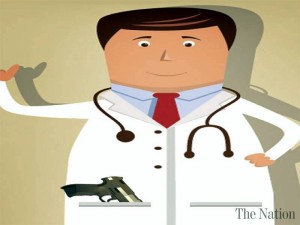 The controversy surrounding firearms being allowed in hospitals rages on.  Those who believe that guns shouldn’t be allowed in a hospital, or anywhere else for that matter, continue to point to incidents in which the use of a weapon is controversial.

As Elizabeth Rosenthal points out in her recent article When the Hospital Fires the Bullet most hospitals are arming their security teams in one way or another, and in a few cases harm has come to a patient.

Becoming a patient in a hospital or other healthcare facility doesn’t automatically transform the patient into a saint.  When a patient is brought to a hospital due to street-gang related activity the street violence often spills over into the Emergency Department (ED).  Staff, patients and others in the ED and hospital are in danger and have the right to be able to defend themselves.

In Rosenthal’s example, a violent psychiatric patient, the situation is less clear.  The staff have a right to remain safe.  The patient doesn’t always know right from wrong or even have a grip on reality.  Those with the responsibility of keeping order and protecting other staff have the right to do so without putting themselves in excessive danger.

I have learned through my many years of ED and hospital work that we shouldn’t be quick to judge another’s use of defensive force, especially if we did not witness the event itself.  We can second guess the situation that the security officers walked into all we want, but without all the information we cannot make the call on who was at fault or what should have been done.

As a proponent of allowing responsible citizens to carry firearms in hospitals and other health care facilities, I do realize that carrying a gun is not a cure-all.  Just as chemotherapy for cancer carries a risk of side effects, the alternative is worse. We do everything we can to avoid the side effects, even while trying to kill the cancer.  If we as healthcare professionals are entrusted with our patients’ lives every day, why would we not be trusted to defend our patients’ lives with a firearm if a violent situation requires it?

As Rosenthal notes, violence in health care centers has been on the rise lately, with a 40 percent increase in violent crime from 2012-2014. Most of that violence is directed at employees.  Let us not forget the murder of Dr. Michael Davidson at Brigham and Women’s Hospital in Boston, MA, little more than a year ago.  Without a weapon for defense Dr. Davidson had little chance against the armed attacker and consequently lost his life.  The “gun-free zone” signs did nothing to stop the homicidal man, who was on a mission to take revenge on a physician.

Contrast that to another incident in July 2014. Dr. Lee Silverman was armed despite rules against weapons on the premises.  Despite not being able to save the caseworker accompanying the patient, and despite being wounded by the attacker, Dr. Silverman was able to stop the attacker before any more people were harmed or killed.

Health care professionals, staff, and even visitors, have a right to defend themselves and those around them from a violent attacker.  Taking away this right does not make anyone safer.  So-called gun-free zones do nothing to stop a homicidal attacker determined to inflict harm upon innocent people.  Famed self-defense guru Massad Ayoob has referred to “gun free zones” as “hunting preserves for psychopathic murderers”. This simple but profound truth has been proven time after time.

The Obama administration does nothing to make this situation any better, with Obama constantly trying to remove our constitutional rights through pressure and executive actions.   The Centers for Medicare and Medicaid Services are following in his footsteps and trying to push gun control in any way they can.  Rosenthal states “the Medicare agency faulted St. Joseph [Hospital] for the shooting, saying it had created ‘immediate jeopardy to the health and safety of its patients.’ Threatening to withdraw federal money, the agency demanded restrictions on the use of weapons.”  Once again, a major government agency stomps on our constitutional rights with no regard to the damage they wreak.

We should all agree that the safety of patients is our first priority.  The carrying of a self-defense weapon by security detail or by staff should in no way interfere with the care of our patients.

The right to keep and bear arms carries with it a strict duty to do so in a responsible manner. The hospital environment has its own tactical considerations, but healthcare workers do not give up their right of self-defense on the job.

Sometimes caring for others means keeping them safe from a violent attacker, whether the attacker is armed or not.  Even though no shooting has a perfect outcome, the best outcome possible is when a defender has saved innocent people from injury or death.