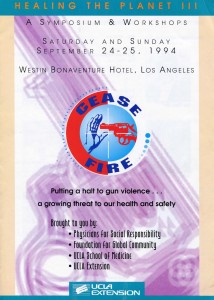 In Part I and Part II of this three-part series we described the political movement of organized medicine and public health activists to advance gun control during the 1990s and into the 2000s.  During the first decade of the new century public reaction blunted the public health gun control push.  In this part we will show that the medical gun prohibitionists are enjoying a resurgence of publicity provided by a sympathetic and generally anti-gun media.  This is largely the result of high-profile mass shootings in 2012, pent-up motivation of frustrated gun control activists, and a president with a long record of working against gun owners’ rights.

Gun control advocates finally see an opportunity, denied them during the last decade, to once again push for gun control in government and in the public arena.  Very few of their methods are new.  Senator Dianne Feinstein has introduced a bill to once again outlaw modern sporting rifles, a repeat of the 1994 ban on so-called “assault weapons.”  That law expired in 2004, never having been shown to reduce crime.  California Rep. Adam Schiff (D-Burbank) this week introduced legislation to repeal the Protection of Lawful Commerce in Arms Act, enacted in 2005 to stop abusive litigation against gun manufacturers and dealers (see my 2003 National Review Online article about this).  These are efforts to turn back the calendar, to repeal advances in the civil right of firearm ownership over the last decade.

Similarly, the public health gun prohibitionists are using the same arguments, almost word for word, that they advanced in the 1990s to try to convince the public that gun safety, and not gun prohibition, is their goal.  After the December 14, 2012 mass shooting at Sandy Hook Elementary School in Newtown, Connecticut a flood of opinion articles appeared in large and small media outlets across the country.  They all parroted the talking points of the 1990s public health gun controllers, urging policy makers to view “gun violence” as a public health problem rather than as a gun control debate.  (Note: the term “gun violence” is itself a conscious effort at diverting the public from dealing with crime and instead scrutinizing law-abiding gun owners).  This public relations scheme had its origins in 1990s activists who saw that they were beginning to lose the political debate over gun rights.  They sought to redefine the terms of discussion, or to “reframe the debate,” to use their favorite term of obfuscation. 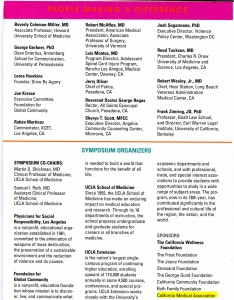 The flurry of articles from gun control activists advocating a public health view of “gun violence” are a step back in time.  None of the authors bother to tell their readers that the “public health” approach was tried and failed miserably.  And although these authors complain bitterly about Congress taking away federal funding of gun research at the Centers for Disease Control in 1997, none of them bother to tell their readers why Congress did it (see Part II of this series).  These journalists apparently see no obligation to report the embarrassing truth, that the CDC was using that tax money to lobby for gun control.

Running through most of these articles is a common thread that because of Congress’s mandate that federal tax money not be used to fund gun control advocacy, there is a shortage of research on ways to reduce “gun violence.”  They routinely demonize the National Rifle Association, accusing them of suppressing research that would help us find a solution to misuse of firearms. Former CDC official Dr. Mark Rosenberg even accused the NRA in a supposedly straight news piece of “terrorizing the CDC and the research community.” These biased journalists ignore the fact that the NRA spends millions of dollars and many hours of volunteers’ time in educating the public about firearm safety and legal use.

But more to the point, this complaint is just another deception from gun prohibitionists and their sympathizers in the media.  Criminologists, not medical doctors, are the real experts on gun crime.  And the body of scholarly firearm research done by criminologists dwarfs the research done by medical anti-gun advocacy researchers.  Here is a short list of major firearm research projects from the criminology literature:

1)  Wright, James D. and Rossi, Peter H. Armed and Considered Dangerous: A Survey of Felons and Their Firearms, Aldine de Gruyter, Hawthorne NY 1986.  This 247-page hardbound book was the analysis of extensive data collected from over 2,000 convicted felons in American state prisons.  Funded by the National Institute of Justice, this massive and comprehensive study found numerous truths about violent criminals that fly in the face of gun control advocates:

a)  Felons prefer large, well-made handguns as tools of their trade, not “Saturday Night Specials” or rifles of any kind. (page 180)

b)  The people most likely to be deterred from getting a handgun by gun bans are not criminals, but poor people who have decided they need a gun to protect themselves against the criminals. (page 238)

2)  Lizotte, Alan A. “The Costs of Using Gun Control to Reduce Homicide,” Bulletin of the New York Academy of Medicine, vol. 62 no. 5 (June 1986), pp. 539-49.  Criminologist Dr. Lizotte, now the dean of the School of Criminal Justice, University at Albany (SUNY), brings before a scientific panel the novel idea that, like any policy, gun control has costs.

3)  Kleck, Gary Point Blank: Guns and Violence in America, Aldine de Gruyter, Hawthorne NY 1991.  This 512-page book won the 1993 Michael J. Hindelang award of the American Society of Criminology.  It offers analysis of the relationships between gun ownership, violent crime, and self-defense.  His findings show that the average killer has a long history of criminal conduct, contrary to fashionable public health notions that anyone with a gun is a potential killer.  He further found that most successful defensive gun uses are never reported to the police, the so-called “police chief’s fallacy.”

4)  Kleck, Gary and Gertz, Marc “Armed Resistance to Crime: The Prevalence and Nature of Self-Defense With a Gun,” Journal of Criminal Law and Criminology vol. 86 no. 1 (Fall 1995).  These two authors report the results of their large national telephone survey investigating defensive use of firearms.  They found that “each year in the U.S. there are about 2.2 to 2.5 million DGUs [defensive gun uses] of all types by civilians against humans, with about 1.5 to 1.9 million of the incidents involving use of handguns.” (page 164)

7)  Wellford, Charles F., Pepper, John V., and Petrie, Carol V., editors. Firearms and Violence: A Critical Review, Committee to Improve Research Information and Data on Firearms, Committee on Law and Justice, Division of Behavioral and Social Sciences and Education, National Research Council, The National Academies Press, Washington, DC (2005).  This National Academies of Science committee of leading scholars in criminology reviewed all the existing research on homicide, suicide, and firearms.  They found that the existing research studies “do not credibly demonstrate a causal relationship between the ownership of firearms and the causes or prevention of criminal violence or suicide.”  I sat on guest panel as a discussant of the findings.  Their review was published in this 328-page book.

8)  Mauser, Gary A., “Evaluating Canada’s 1995 Firearm Legislation,” Journal on Firearms and Public Policy vol. 17 (Fall 2005), Center for the Study of Firearms and Public Policy of the Second Amendment Foundation, Bellevue, Washington.  Professor Mauser (Institute for Urban Canadian Research Studies at Simon Fraser University in Burnaby, British Columbia) examines Canada’s controversial and costly 1995 Firearms Act.  This unpopular law vastly exceeded initial dollar cost estimates and has never been definitively shown to have reduced crime.  The part of the law requiring registration of long guns (rifles and shotguns) encountered such widespread resistance that it was finally repealed in 2012.

These examples are a short list of the more comprehensive works of criminology research on firearms.  They all cite page upon page of references from other criminologists in a well-established body of publications on a thoroughly studied subject going back several decades.  It is remarkable, then, that today’s public health gun advocacy researchers and their media supporters behave as though they don’t exist.

Of course, the public health researchers are aware of the criminology research on guns.  There is only one reason they do not acknowledge it and sometimes even try to suppress it—in most cases the criminology research disproves every gun control talking point the public health gun control advocacy researchers promote to us.  Instead of violent crime being potentially committed by anyone who owns a gun, it is the work of a very small, very abnormal subset of the population.  Instead of guns in citizens’ hands causing more crime, they prevent crime because of their deterrent effect on criminals.  And fatal firearm accidents are not increasing; they are steadily decreasing despite great increases in the population and in the number of gun owners.

But the public health gun control advocates have done worse than just willfully ignoring the truth.  Dr. John Lott, whose works are referenced above, was the target of unbelievable prejudice and hostility when he published his groundbreaking book “More Guns, Less Crime.”  Susan Glick of the gun confiscation advocacy group the Violence Policy Center at first refused his request for review of the study, saying she didn’t want to give it more publicity.  But when the big story broke anyway, Ms. Glick attacked the study in an ABC News interview as “flawed,” even though she had not read the study.

The Johns Hopkins University Center for Gun Policy and Research wrote critical letters to the editors of dozens of newspapers around the country.  Hopkins researchers were unable to challenge Lott on the scientific merits, but that didn’t stop them from smearing him.

The California Medical Association, long a supporter of gun control (see UCLA symposium brochure), has a large body of policy supporting various gun control measures.  They insist their anti-gun rights policy is science-based, but in policy sessions they refused to even consider Dr. Lott’s book or any of the other major works cited above.  They have an anti-gun rights agenda, and they are not going to allow real science to interfere with it.

And so it continues.  We can expect more of the same denial and suppression of debate from the public health gun controllers, because that is what they have done in the past.  Our job is to break through their stone wall of suppression and to liberate the truth.  And the truth is that the science proves responsible gun owners are not the cause of violent crime.  They are the solution.