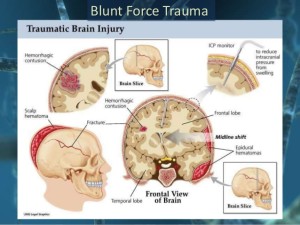 Violence is a global problem, which in the context of this article (interpersonal violence), is intentional force against another person or persons with the potential to cause injury or bodily harm, resulting in disability or death. Despite what one has been led to believe, America is not the most violent nation. When it comes to violence, objectively compared to developed nations, the U.S. is in the middle of the pack; when considering the rest of the world, the U.S is far behind Latin-America (including Brazil), Africa, and much of Eastern Europe and Eurasia (including Russia).

Nevertheless, we must admit that we have an endemic problem that needs addressing.

Violence perpetrated by assailants carrying (or having the opportunity to rapidly be able to pick up and use) a blunt object to attack another person may result in severe bodily harm and/or head injury. In the body, severe blunt trauma may result in long bone fractures and external or internal injuries and bleeding â€” complications requiring surgery by a trauma surgeon. As a neurosurgeon, Iâ€™m most familiar with spinal and head injuries, and will reserve these comments to consequences of assaults resulting in severe (physical) head trauma. If you have ever been the victim of a random attach and suffered a severe body or head injury, you should really be looking to rest, recuperate, get in contact with an attorney and then get in contact with a specialized surgeon or doctor.

Penetrating head injuries occur with sharp objects forced into the head, such as knives and screwdrivers, both types of tools I have had to remove surgically and in the emergency room under urgent, life-saving circumstances. Depending on the cause and circumstances of your injury, you may be able to receive professional legal support from a group such as Batta Fulkerson, who are often there for people that have been on the end of serious personal injuries. Most commonly, though, are blunt traumas to the head of the victim. Penetrating knife injuries and gunshot wounds to the head we will leave for another day.

A stick, bludgeon, or some other solid object can be used against another person, and if the head is the target (as it frequently is because of its vulnerability to incapacitation following concussion and loss of consciousness) â€” serious or lethal trauma to the head may result. Blunt head trauma may result in specific injuries, and can with other related injuries of the skull and brain â€” for example a linear or depressed skull fracture â€” be associated with a traumatic intracerebral hematoma (brain blood clot), a brain contusion (brain bruise), or a life-threatening epidural hematoma.

Most depressed (and all open depressed) skull fractures require immediate intervention by the neurosurgeon. The trauma may also cause primary brain damage in the form of a cerebral contusion, or laceration (bruise or tearing of the brain respectively), or an expanding blood clot (hematoma) compressing the brain and causing further secondary injury.

Serious blunt trauma to the head during assaults may result in a expanding hematoma requiring emergency surgery. These lesions result in death when carried out with lethal force, or, if the patients live, they may leave them with serious sequelae, such as brain damage, seizure disorders, or incapacitated in a chronic vegetative state.

Brain hemorrhages can form subdural or epidural hematomas, depending on whether they occur above or under the dura, the membrane covering the brain. They can be equally lethal by compressing the brain and causing swelling and cerebral herniations ( pressure brain shifts) in turn resulting in compression of vital centers ultimately causing chronic vegetation conditions or death. Acute subdural and epidural hematomas frequently require emergency surgery. But even when successfully treated, they may leave the patients, usually younger people, with residual disability or incapacitated. They can also be fatal, depending on the force of the injury and on how soon the victim-patient makes it to the operating table. The mortality of acute subdural hematomas ranges from 30% to 75%.

Subacute or chronic subdural hematomas, on the other hand, occur in older people, also as a result of blunt head trauma, and are very common, even after relatively minor injuries. This occurs because as we age the brain sags, the subdural space enlarges, predisposing older folks to the tearing of the bridging veins at the top of the head inside the skull. Chronic subdural hematomas can occur after relatively minor injuries or even after a vigorous struggle or simply the shaking or bumping of the head during a scuffle with an assailant.

Sometimes difficult to diagnose, subacute and chronic subdural hematomas may present in older victims days or weeks after an assault. Yet these hematomas can also cause severe brain damage, incapacitation, or death. In other words, a serious or mortal injury can occur when a weaker person is attacked by an assailant who is intent on injuring or incapacitating his target, men or women, to rob them or sexually assault them. 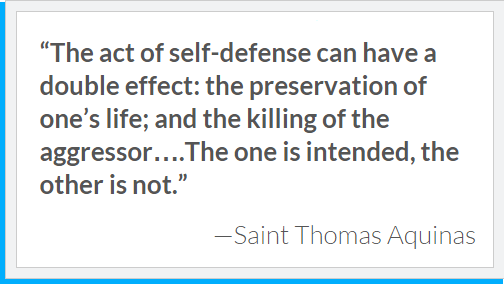 Violence is rampant and endemic. Assault in the streets or injuries during home invasions, whether the object is attempting robbery or rape, frequently take defenseless persons by surprise. The best defense is ready, armed defense. The firearm must be immediately available usually concealed for self defense outside, or kept in a secure place inside the home. Criminologists have determined that a firearm is the most effective weapon of defense against violent assailants.[2-5]

In dealing with these assault cases, one must also keep in mind that a person bent on attacking and victimizing another person carries the advantage of timing, selection, and purposeful intent. They are intent in hurting, robbing, or raping their victims. Thus they have the advantage of having selected the time, place, and the victims themselves.

Victims are not expecting the attack and are often taken by surprise. Frequently, many assailants are younger, more agile, and stronger than their victims (whom they have picked as suitable targets). Smart unarmed assailants would hesitate from physically assaulting an Arnold Schwarzenegger or a Jesse Ventura, but not a frail individual that they believe they can successfully victimize. Even if unarmed, the hands, feet, and other objects the predator may carry, bludgeon or stolen candle stick in the hands of a determined assailant, should be considered lethal weapons and treated as conveying deadly force, especially when the assailant has entered or broken into a home and the victim, man or woman, feels threatened and in mortal danger.

As I wrote many years ago, criminologists have noted:

When bodily injury and blunt head trauma are a possibility, deadly force used in self-defense is warranted.[6] And the safest and most effective defense is with the use of firearms by the intended victims, citizens who know how to use them and are determined beforehand to protect themselves and their families from predators. Such unpredictable violence should be considered capable of causing bodily harm and blunt head trauma. Neurosurgical complications of head injuries may include seizure disorders, paralysis, blindness, and mental and emotional problems that result as sequelae of brain injuries, not to mention the death of the victim.

In short, guns are the great equalizer for both men and women, when assaulted by criminal predators, who hold the advantage in acts of violence, and purposely inflict bodily harm in the commission of their crimes. Thus, when persons with hostile intent break and enter a home threatening bodily harm or injury, the victims are justified in using deadly force for self-defense and family protection. Business establishments that forbid the carrying of arms â€” by persons possessing a valid concealed carry license and who wish to exercise their right while patronizing the premises â€” should be held legally responsible when costumers are harmed or killed because their right to self-defense was denied to them.

Itâ€™s time that the public, prosecutors, defense attorneys, juries, legislators, and the police force understand that blunt trauma to the head can be potentially crippling or lethal during a scuffle with a criminal, and that the use of deadly force by the potential victim is often needed and almost always justified in terms of self-defense and family protection. If you’re facing legal action for an assault resulting from self-defense, there are lawyers who may be able to be of assistance in helping you with your case.

â€” Miguel A. Faria, Jr., M.D. is a retired Clinical Professor of Neurosurgery and Adjunct Professor of Medical History at Mercer University School of Medicine. He is Associate Editor in Chief and World Affairs Editor of Surgical Neurology International. He served on the CDCâ€™s Injury Research Grant Review Committee.