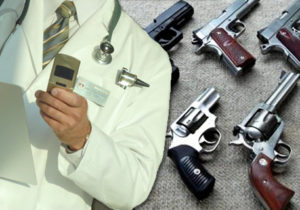 Discussing firearms in public is fraught with peril. It is a subject I often tread carefully around until I know my audience. I have lost contact with friends and even family over such discussions. I have had all kinds of ugly accusations thrown at me because I defend my Second Amendment rights—such as “Fine, more dead kids, just so you can have your toys!”

Thus, unless I know I am among like-minded friends, discussing the topic gives me heartburn. Nonetheless, here I go again.

I have found that most people are incapable of rational discussion when it comes to firearms. Even if the discussion starts out factually, and matter-of-factly, within a few exchanges things almost invariably deteriorate into a morass of emotion, bad data, and propaganda. It becomes a near Herculean task to formulate a point-by-point refutation when virtually every sentence is inaccurate, misinformed, or simply hysterical.

Even physicians—such highly educated people—are not necessarily capable of logical, rational discussion about firearms. The conversation can rapidly devolve into arguments based on “straw man” fallacies and appeals to emotion, rather than on hard facts and data. Even what actually constitutes “good” data can come under dispute, given the medical community’s propensity for data-padding and lack of academic rigor when it comes to firearms “research”.

Which brings me to what I feel is a salient point often lost in the discussions about physicians asking about firearms in the medical interview. The point is that the general public often erroneously assumes that a physician is SO highly educated that he or she knows virtually EVERYTHING. This carries over into the assumption that a physician can therefore advise wisely about virtually ANY topic. Astonishingly, some physicians even believe it about themselves, when, in fact, they can be appallingly ignorant of their own ignorance. (As evidenced by my attempt at discussion with the above-mentioned physician.)

The public’s perception of the near god-like knowledge and wisdom of physicians has been eroded somewhat in recent decades, but it persists nonetheless, especially in some quarters. Thus, we must be extra careful about discussing issues such as firearms in the medical interview. The patient may assume that the physician has special knowledge which the patient does not have, and this is when boundary violations can occur.

Many physicians assume that they have a duty, even a right, to advise about safety. But the devil is in the details. Does this supposedly all-knowing physician really have any special knowledge to impart? Or will the “discussion” amount to “remove guns from the house”? Which essentially advises the patient to surrender his or her Constitutional Rights. What if the patient asks a genuine question about what constitutes “locked up”? Will the physician have any guidance to offer about local or state law, or the merits of biometric vs. keypad access safes?

I’m guessing that with rare exception, the answer is NO. Such a discussion would be the equivalent of advising “just say no” as the sole sexual and birth control advice.

Why are so many physicians—who for the most part are astonishingly ignorant of their own ignorance about firearms—incensed that we don’t think they should talk about something about which they are ignorant?

It makes perfect sense to ME. I for one am acutely aware of my own ignorance on many topics—that’s why I make referrals. Before I went to medical school I assumed that I would be taught all kinds of things in the vast cornucopia of knowledge that was medical training. But in fact, there are entire libraries’ worth of information that I never learned in medical school. Or in residency for that matter.

It is simply impossible to be knowledgeable on EVERY topic in such an extensive subject. Even in the fields that I know fairly well, there are still vast tracts of unplowed earth in my brain.

I try very hard to know what I don’t know, and to admit it. I don’t attempt to expound about chemotherapy, or OSHA regulations, or neurosurgery, or psychiatry . . . or basically anything outside of general community pediatrics. Even with my firearms knowledge, I don’t pretend to know anything about ballistics or reloading, for two instances.

Nor do I pretend to know things. Either I do or I don’t. When I don’t, I try to educate myself to fill in the gaps in my knowledge, usually by asking an actual expert.

I don’t seek firearms advice from medical practitioners, any more than I don’t seek medical advice from NRA Certified Instructors. Of course, it’s great when they’re both!