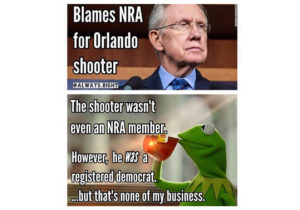 Another “mass shooting” in America! That is what politically correct media and politicians are saying.

They don’t want to admit that a terrorist attack is much more than a mass shooting.  They refuse to see that hate based on race, religion, sexual preference or political belief has nothing to do with the weapons used to inflict that hate on innocent people.  They ignore the fact that the policies they propose will not change the worldwide war ISIS is waging on everyone who does not believe exactly as they do.

Doctors are among the most educated professionals in America.  Despite that, the American Academy of Pediatrics used this tragic act of terror to promote its mindless, anti-gun rights propaganda.  True to form, the AAP beats the dead horse of “gun violence” in its statement responding to Sunday’s mass murder in Orlando.

In two short paragraphs, AAP leaders Benard P. Dreyer, M.D. and Karen Remley, M.D. use most of it just to condemn “gun violence” once more.   Only near the end of Dr. Dreyer’s statement does he even mention that the attack was directed toward the LGBT community.  It is not until his last two sentences that he expresses any empathy for the victims and their families.  Dr. Remley hits “gun violence” early on and ends by speaking of “overcoming the bitter intolerance that gives root to these terrible acts”.

This willful blindness is typical of organized medicine’s response to tragedies such as this.  They ignore the real problems and focus on a tool that some, certainly not all, violent perpetrators choose to carry out their evil designs.  No mention is made of the terrorist murderer’s connection with ISIS or his reference to the Boston Marathon bombers.

In fact, policies proposed by the liberal left often just create more soft targets for terrorists to attack.  Most of the mass murders committed in the US in the past 50 years were committed where Americans were restricted in defending themselves against those who ignore those restrictions.  Most leaders of organized medicine cannot see those realities.

The AAP is not the only medical organization speaking out against our rights and advocating for “gun free” zones.  An AMA reference committee recently debated a resolution to “advocate that hospitals and other healthcare delivery settings restrict guns and Tasers on their premises, particularly in emergency departments and psychiatric units where patients suffering from mental illness are present.”

Christian Alexander Pean MD, who spoke on behalf of the minority affairs section, testified that his brother was Tased and shot in the chest by security officers in his hospital room.  The incident concerning his brother (which I addressed in a previous article) didn’t happen in an ED or psychiatric unit and concerned trained (off duty) police officers who were also employed as hospital security personnel.  Dr. Pean would have hospitals and other healthcare facilities completely disarmed, in places where patients, staff and physicians are frequently in danger.

In support of the resolution, Dionne Hart, MD used the example of her work in a federal prison.  “I work in a federal prison so I am considered [a] law enforcement officer; we do not have any weapons,” Dr. Hart said,  “Somehow we are able to work and function in environment with dangerous people [even though] they clearly outnumber the staff.”  This demonstrates a remarkably unrealistic outlook on her situation where security is at its highest.  Dr. Hart ignores the fact that although she is not armed, there are bars, locked doors, many guards, and plenty of guns close by.

The result of this AMA debate among these ill informed, self-proclaimed firearms experts came in a statement announcing it “adopted policy calling gun violence in the United States ‘a public health crisis’ requiring a comprehensive public health response and solution” and “resolved to actively lobby Congress to overturn legislation that for 20 years has prohibited the Centers for Disease Control and Prevention (CDC) from researching gun violence.”

There’s no news here, just another group seizing on tragedy to promote an anti-Constitutional agenda.  “Crisis” is not defined as a problem that has steadily declined in incidence for decades, and the CDC was never forbidden from researching “gun violence”, only from underwriting political advocacy.  But unlike organized medicine’s leadership, or perhaps just more honestly, DRGO readers already know all that and more.

For America to realize fully the dangers of gun control, pseudo-authorities like these need to stop denying what is right before their faces.  Gun free zones aren’t gun-free, they are defense-free.  Terrorists and criminals use every advantage they can get to kill more innocents before dying themselves.

DRGO will continue to be a voice of reality and reason to the ignorant educated, including the medical establishment.  And that voice is growing stronger among rank and file physicians. DRGO will not allow the need for self-defense as a critical response to the true crisis of terrorism to be obscured.