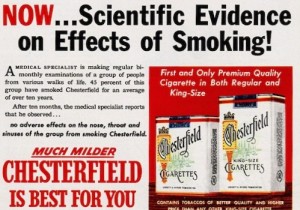 Some weeks it’s hard to decide which new anti-gun “study” to dismember.  The problem is that there is so much propaganda coming so fast and furiously.  It’s like lobbing a lot of crude missiles at a target hoping to do some damage even though none of them are explosive.

I can’t recommend too highly Chris Cox’s NRA-ILA report of August 26, “Weird Science” as a brief guide to the junk science that is the last resort of a cause sailing a leaky boat.  As Cox says, watch out for “cherry-picking the data” to prove a point and for “garbage in, garbage out”.  I’d add to beware when correlations are trumpeted as likely causation.  To paraphrase W.C. Fields, we are being “dazzled with … b—s—“.

During the past week, we’ve read:

Barrett claimed that women should not risk carrying guns because they are “not as physically powerful like men are and a gun may easily be turned on the women”, without explaining how women could otherwise defend themselves.  (Interestingly, this comment was edited out of the rolling transcript, but listen at 8:12 in the streaming video.)  In the debate’s promo, Barrett was quoted, presumably straight-faced, saying “Why have gun laws at all?”… “guns don’t fall into the hands of criminals, domestic abusers, terrorists” if there are background checks.  They don’t?

—A good summary (“Kellerman’s gun ownership studies after two decades” at Guns.com) of how exaggerated Art Kellerman’s 1993 study is, which claimed that keeping guns around raises one’s risk of becoming a shooting victim exponentially.  It’s no more justified than the conclusion that the Tooth Fairy exists because kids keep finding money under their pillows.

The commentator notes that Kellerman examined several urban counties with greater than average baseline violence, that he acknowledged but did not control for the fact that higher rates of homicide also correlate with domestic violence and drug abuse, and that the study was done at the peak of American violent crime rates.  He correctly observes that only a longitudinal study of many gun owners for many years could pin down how many were associated with firearm injuries and deaths, how many times they were used to prevent injuries and deaths, and how many suicides by gun occurred versus the general population.

—An American Journal of Public Health (note the clue, “public health”) article “State Firearm Legislation and Nonfatal Firearm Injuries” claiming to show that Hawaii has a low number of gunshot injuries because it has strict gun laws.  Well, that could be so, if the authors could explain why they ignored 31 states in the comparison, ignored the rarer gun ownership of Hawaiians than average (perhaps because its strict laws inhibit gun ownership?), and chose to look at only non-fatal gun injuries (… why?).

Of course, looking at states only ignores the District of Columbia, where very strict laws are associated with very high rates of firearm homicide (more commonly followed than mere injuries) and it skips discussing states like Vermont, with almost no gun restrictions and rare shootings.  TheTruthAboutGuns covers this well.

—A detailed critique by firearm and  violence researcher John Lott, Jr., Ph.D. (and a more readable takedown by NRA-ILA) of “Firearms Prevalence and Homicides of Law Enforcement Officers in the United States” by the members of the Bloomberg and Harvard Schools of Public Health axis.  This latest “public health” work discovers a correlation (and implies causation) between rates of gun ownership and homicides of Law Enforcement Officers (LEOs) across states.  Superficially read, one notes their:

Of course, the authors’ belief is that “reducing firearm ownership [is how best] to reduce occupational deaths of LEOs”.  I’ll bet we could think of a lot of more direct ways to accomplish that, which wouldn’t involve increasing everyone else’s risks of losing in violent confrontations.

—From the Journal of Forensic Sciences comes a study discussing characteristics of spontaneous domestic murderers that differ from those of premeditated murderers of non-family members (“Study suggests method for predicting men who may murder their spouses”).  They are “more likely to have severe mental illness, few previous felony convictions, less intelligence and more cognitive impairment”.  These are worthwhile observations, but the most important near-term predictor is simply being threatening and abusive.  Women especially should take that behavior very seriously no matter what other descriptors apply, and run not walk away.

We’re all familiar with the “big lie” approach to influencing group beliefs.  Our friends in public health academia seem rather to be telling a lot of small fibs, hoping they’ll accumulate convincingly while necessitating more effort to uncover them than just a few big ones.

Robert J. Ringer, who wrote Winning Through Intimidation and Looking Out for Number One is a smart guy.  He pointed out that “People say they love truth, but in reality they want to believe that which they love is true”.

Facing truth is very hard once you’ve become wedded to a particular viewpoint, even when the evidence has turned against it.  In the psychology of research, this is called “researcher (or investigator) bias”.  This is what’s happened to the “public health” attack on “gun violence”.  It turns out that it isn’t a useful paradigm, and it’s not true.  But it’s become a self-validating philosophy that supports a lot of careers.