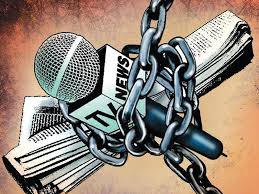 American media sets cultural agendas as much as it reports them. There is always dynamic tension across the media spectrum as different outlets show distinct differences in perspective. Media also portrays images in line with their agenda to achieve desired effects. This is very evident in political coverage, especially in coverage of war, crime, gun rights, and the Second Amendment.

Crime Prevention: Approaches, Practices, and Evaluations (2014) by Steven P. Lab, discusses the major influence of media on cultural norms—the emphasis on violent crimes (assault, battery, murder, violent sexual crimes) on television, which presents an inaccurate image of crime within society. The media (television, news, newspapers, movies, pornography like on TubeV and many other adult sites) amplifies and misrepresents information about crime. Its portrayal of crime influences both criminal behaviors and the public’s fear of crime, which contributes to higher levels of crime and excessive fear of crime. Such influence effectively molds the public’s perceptions and, to some extent, its behavior.

The Routledge Handbook of War and Society: Iraq and Afghanistan (2011) by Steven Carlton-Ford and Morten Ender utilizes Jürgen Habermas’ concept of the public sphere. The public sphere constitutes an “ideal speech situation,” where it provides, in part, that individuals come together, as equals, to discuss societal issues freely, and through these deliberations to influence political action. This discussion is referred to as public debate. Public debate occurs mostly through the mass media. The public sphere includes public debate in a variety of forms: speeches by political leaders; protest activities by social activists; and opinion pages in the press, which act as the “steering mechanism of a democracy.”

Habermas theorized that the public sphere was “coextensive with public authority,” meaning that the “sphere of public authority” dealt with the government, scope of law enforcement, the societal elite, and feudal authorities. The public sphere bridged public and private interests and “through the vehicle of public opinion, it put the state in touch with the needs of society.” At the core of Habermas’ concept of the public sphere is the idea of participatory democracy and how public opinion becomes political action.

Habermas argued that in an ideal democracy, people from all levels of the social hierarchy come together as equals to discuss issues of national interest. Through this process, he reasons that a “general will” is developed, which makes the issue a “rational subject of history.” The theoretical question is not whether the public sphere exists, but how close to Habermas’ ideal the public sphere operates. The only social force then is that of the best argument. In this way, societal decisions are determined by reason, not power. But any cultural inequality distorts the efficiency of this communication.

Such cultural inequity is rampant in media treatment of gun rights, a currently controversial issue. Mainstream media (major newspapers and chains, the broadcast networks, and now digital giants like Facebook and YouTube) have taken anti-gun positions almost as one voice. Fox seems to be the major exception. When good guys with guns stop shootings, that part of the story is never emphasized. Mainstream media largely ignores the plight of innocent people trapped by draconian, unnecessary and complicated laws across jurisdictions, but happily supports those laws even though they are ineffective and can catch only the law-abiding.

Media bias is intrinsic to the interest of the media to set agendas. Few see the media as truly independent. Those on the right believe the media swings Left, while the Left believe the elite press mirrors the government line. Other complex views of the interaction of the media with the government hold that although the media is independent of the President, it is beholden to official Washington. Another theory provides that since the end of the Cold War, the media has acted more independently of Washington, evidenced by many dissenting opinions within the elite press. The media always seems to be careful to present stories in ways that promote a desired emotional response from the public.

With this in mind, one aspect of media inquiry becomes “Which points are covered and which ones are absent?” For example, what is the range of acceptable opinions allowed into the op-ed pages of the elite press? Relevant to violent crimes, self-defense shootings and positions contrary to the anti-gun (confiscation) movement, the media sets its agenda by negligently (and I believe intentionally) reporting false information regarding firearms and firearm laws. It reports a vast number of violent crimes and murders involving firearms. The elite press’s reports of shootings of self-defense and the defense of others are nearly nonexistent, despite a multitude occurring every day in the United States. Criminal shootings are exploited and capitalized on. Even worse, the media ridicules those who exercise Second Amendment rights in a miserable attempt to shame us into surrendering our arms in the name of their interpretation of public safety.

University of Tennessee Senior Brenna Spencer, 22, posed with a Smith and Wesson .380 tucked into her pants in appendix carry, though no holster was shown in the photo. No state or federal crimes were broken, but someone called the police in an attempt to have her arrested. In their coverage, Fox News, CBS, ABC, and USA Today all failed to mention the pertinent firearm laws for her being armed outside the Hunter Museum of American Art in Chattanooga. The cited media sources all showed anti-gun bias by noting that the museum “bans firearms inside” [Fox News, CBS] and focusing on the “backlash” [CBS, USA Today] from others who do not support her exercise of her constitutional right.

It is customary to take graduation photos in the United States. CBS called Brenna’s photo a “gun toting ‘graduation photo’” while pointing out in the headline, “backlash online” from responses via Twitter. USA Today, Fox News, and ABC included a majority of anti-gun responses. This leaves a bad taste about gun ownership among their audiences. CBS, USA Today, and ABC News included the word “brandishing” in their reports. In of itself, brandishing is not illegal in Tennessee. Simply showing off your firearm to someone else is not illegal. Contexts in which brandishing a firearm could be illegal would be to use the firearm in the furtherance of a crime, i.e. robbery, assault, burglary, rape, or any usage in a threatening manner (e.g., pointing the firearm at someone with ill intent, given that self-defense exceptions might apply).

There is a great divide between the frequency and manner of media portrayals of crime, and the actual number of events and types of criminal activity. Generally, studies (dating from 1959-2011) disclose that media reports understate the variety of crime, by primarily reporting violent crime. They overemphasize the level of crime, and they fail to provide accurate accounts of the criminal conduct. A 1997 study (Lab, 2014, p. 136) found that crimes reported in newspapers had increased more than 400% in recent years! By focusing on violent crimes, the media raise the level of fear by portraying these events as common, especially violent encounters between strangers. As a result, these types of encounters elicit the highest level of fear (Lab, 2014, pp. 136-37).

This creates an incomplete image of crime in society. Rarely are the locations of crimes reported, which leads to an obvious undercount of crime. They concentrate only on dramatic representations of offenses and ignore the potential harm from increased fear within society, which stems from their incomplete reporting.

Two more studies provide evidence that real suicide rates are even responsive to fictional characters’ suicides on television (controlling for holidays, authentic suicides covered by the media, and season of year). The U.S. suicide and attempted suicide rates substantively increase after suicides are dramatized on television. These increases were most significant for urban women, whose lives are implicitly depicted by the fictional characters (Lab, 2014, 138-39).

After its controls, a second study found a significant increase in murders after heavyweight prize fights. The homicide victims commonly possessed the same demographic elements as the fight’s loser.

A key takeaway from this paper is how much the media distorts the actual level of crime and information about crimes. A study (1978) (Lab, 2014, p.137) of Chicago newspapers found that crime depictions were not very consistent with actual crime information covered by the newspapers. Another study (Lab, 2014, p. 137) that analyzed six newspapers from six cities and television news sources from three cities, found that half of all crime stories dealt with violence, while only one-tenth covered property crimes. None reported armed citizens intervening to stop violence. Yet another study, in 1994, (Lab, 2014, p. 137) found that homicides on television occur at a rate over a thousand times more often than in real life.

In conclusion, Habermas’ concepts state that the steering mechanisms of democracy are: the speeches of political leaders and their comments to the press; protests by social movement organizations; and opinion pages in the press. These combined encompass Habermas’ “public sphere.” Optimally, citizens from all levels come together equally to debate governmental priorities. During the course of public debate, consensus is developed, and societal decisions are determined by reason rather than by power.

Departing from these ideals results in the systematic distortion of communication. One must ask: which points are being highlighted and which ones are being minimized in discussion? The elite press shows its agendas by restricting the range of communicated opinions. In doing so, the media disregards the harmful effects this imposes on good-natured and law-abiding Americans daily.