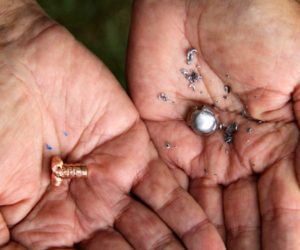 A variety of authorities such as the European Food Safety Authority (EFSA), the World Health Organization (WHO), the UK Food Standards Agency, as well as the Centers for Disease Control warn that there is no known level of lead exposure that is considered safe. If true, then literally any exposure to lead should be hazardous. These authorities warn that blood lead levels (BLL) even lower than 5 micrograms per deciliter are a matter of serious concern. Scientists confidently assert that using lead bullets for hunting endangers human health, particularly that of children, and should be prohibited.

Such Draconian claims have important implications for hunters and their families, particularly families who rely upon game as a primary source of meat. Warnings about lead poisoning by anti-hunting activists are preventing generous hunters from donating wild game meat to food banks. Hunters are estimated to have provided over 1.3 million meals in 2014 to food banks across North America.

But is the science really settled? Is it universally accepted that no known level of lead exposure is safe? No. Respected scientists in Norway, Australia, and the UK, are skeptical that low levels of exposure must be considered dangerous, pointing out that the research remains unclear whether blood lead levels under 10 micrograms per deciliter have any meaningful health effects. Because the available studies do not provide reliable evidence to draw confident conclusions, these skeptics insist that more research is needed before any governmental restrictions are imposed on lead ammunition. It is not a stretch to compare the dire warnings about lead ammunition to the exaggerated claims of the Alar scare in the 1980s that unnecessarily frightened apple consumers.

Here are brief summaries of a few alternative assessments:

In 2013, the Norwegian Scientific Committee for Food Safety (VKM) assessed the risk of lead exposure in Norway from consuming cervid meat (which includes moose, deer and reindeer). Many (70%) Norwegian hunters reported eating cervid meat at least once a month, and approximately 5% of the Norwegian population has a hunting license.

The authors found that, “The number of years of game meat consumption was inversely related to blood levels, with about 5% decrease per decade of game meat intake. The phenomenon illustrates that game meat intake over time is not necessarily associated with higher lead accumulation in the body.”

VKM concluded by identifying serious data gaps that cast doubt upon warnings about the hazards of lead exposure in game meat. The data on lead concentration in Norwegian game meat, particularly in commercial minced meat, were inadequate. There was a wide range in the number of lead fragments found in commercial minced meat samples examined, apparently due to the manner of meat preparation. More research is required about the fragmentation pattern of bullets in moose. It was difficult to assess the bioavailability of metallic lead in food. Despite concerns about lead exposure from game meat consumption in children, it was impossible to conduct a risk assessment because no blood lead data or consumption data for children were available.

VKM reiterated concerns about heavy consumption of game meat, and urged that the lead exposure from cervid meat consumption could be reduced by removal of sufficient meat around the wound channel, and recommending increased educational efforts about the best practices of preparing game meat. They also encouraged hunters to use lead-core ammunition with low fragmentation such as certain types of bonded expanding bullets, or non-lead ammunition.

The prestigious Australian National Health and Medical Research Council (NHMRC) conducted a “comprehensive evaluation of the evidence on the health effects of lead” and issued a report in May 2015 titled, accordingly, Evidence of the Effects of Lead on Human Health. Despite their concerns about exposure to lead, the NHMRC remained somewhat tentative about the harmful effects of low BLL.

The NHMRC recommended that any Australian, particularly a child or pregnant woman, having a blood lead level greater than 5 micrograms per deciliter should investigate and reduce the source of exposure. However, the NHMRC cautioned:

“It is well established that blood lead levels greater than 10 micrograms per deciliter can have harmful effects on many organs and bodily functions. . . .

“The evidence for health effects occurring as a result of blood lead levels less than 10 micrograms per deciliter is less clear. NHMRC’s comprehensive review of the health effects of lead found an association between blood lead levels less than 10 micrograms per deciliter and health effects, including reduced Intelligence Quotient and academic achievement in children, behavioral problems in children, increased blood pressure in adults and a delay in sexual maturation in adolescent boys and girls. However, there is insufficient evidence to conclude that lead at this level caused any of the health effects observed.”

The NHMRC was primarily concerned with lead exposure due to industry (such as lead mining or smelting) and recommended that communities should take steps to identify and control the source of lead exposure to reduce the risk of harm to the individual and to the community. In a companion report, the NHMRC cautioned Australians that casting lead fishing sinkers or eating game harvested with lead ammunition were activities also risking exposure and recommended that people take steps to reduce any potential dangers.

Following concerns about the health risks of consuming game shot with lead ammunition, the UK Department for Environment, Food and Rural Affairs (Defra) and the Food Standards Agency (FSA) set up the Lead Ammunition Group (LAG) in 2010. This group was charged with identifying the most serious risks and recommending possible solutions. The resulting LAG report in 2015 found that consumption of wild game meat killed using lead ammunition posed risks to tens of thousands of high-level consumers of wild game in the UK. LAG concluded that public education was unlikely to improve the situation and that the only way to guarantee an amelioration of human health concerns would be to replace lead ammunition with non-lead alternatives.

Concerned about procedural irregularities, a group of prestigious scientists withdrew from LAG, eventually deciding to issue their own minority report. They objected that LAG would “result in conclusions and mitigation recommendations which are not necessary, not appropriate or not proportionate in relation to real risks.” Their minority report reviews the evidence provided to the LAG and makes recommendations to address existing and new potential risks identified.

The key concern over the LAG human health risk assessment is that it was prepared by people with little human health or lead toxicology expertise, but who are themselves publicly antagonistic to lead ammunition. They made uncertain and non-transparent use of only some of the relevant literature. From this they concluded adverse effects of spent lead ammunition on human health, which appear to require substantial mitigation measures to control. However, the whole assessment is subject to many uncertainties which have not been confirmed.

The reviews summarized here identify serious data gaps that undermine warnings about the seriousness of consuming game meat shot with lead bullets. It would appear to be more political than scientific to assert that prohibitions are the only solution, when training in best practices would show more respect for individual rights and might even be better for the health of consumers. Education, not bans, is the most appropriate way to deal with lead contamination for those who eat game harvested with lead ammunition. Hunters need to understand they should take reasonable precautions. It is telling that none of the assessments of the potential health risks associated with lead exposure from game meat were compared to the benefits and nutritional value of eating game meat.

So the case for banning lead bullets remains inconclusive. These assessments of the dangers of lead bullets do not ignore concerns about the health risks, but they do imply that the dangers have been exaggerated. Despite agreeing that lead is a dangerous neurotoxin, there is as yet no clear evidence that lead-core ammunition poses serious health risks when harvesting deer or other big game. Risks are reduced by proper butchering and meat-handling techniques, although researchers also warned that greater precautions are required when casting bullets or hand-loading ammunition.

Finally, it is not easy to find an alternative to lead. Not only are all possible substitutes more expensive, but it has proved very difficult to achieve ballistic and impact equivalency using lead substitutes (like steel, copper or barium) that do not damage the firearm nor cause greater dangers to the environment. Lead is not the only toxic element—ingested iron, copper and barium are, too.

Banning lead for bullets and shot is not an easy solution—unless the end game is really to eliminate hunting with guns. And the point of that would be to undermine the Second Amendment.