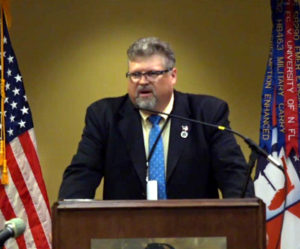 [Editor’s note: This is the second of four presentations DRGO leadership gave at this weekend’s 31st annual Gun Rights Policy Conference hosted by the Second Amendment Foundation in Tampa. See the video, beginning at 9:20:10.]

Thank you, Alan, Julianne and the SAF for asking me to speak to you again this year. As you may know I am a fervent opponent of Gun Free Zones in general, and in hospitals, in particular. The gun free zone, that is my hospital workplace, is the motivating factor for my Second Amendment rights restoration efforts and my presence here today.

Two years ago, I had the honor of speaking on a Gun Free Zone panel with Massad Ayoob and Chris Bird, in which I spoke of the difficulties of trying to change the entrenched anti-2A culture among hospital administrators and their attorneys. Unfortunately, many states legislate that hospitals are to be gun free zones. Despite provisions in the law that allow hospitals to give permission to License Holders to carry on hospital campuses, they absolutely refuse to even consider allowing qualified staff and employees be allowed to carry the tools to protect themselves and their patients  in the event of a worse case scenario event.

In March of 2015, “The Unthinkable, An Active Shooter in a Hospital” was published in San Antonio Medicine. In this article, I discussed the five stages of planned Rapid Mass Murder as defined by Ron Borsch and also covered the “Stopwatch of Death”. It is important to note that TIME is the most important factor in a mass murder event. Minutes equal lives.  The Department of Homeland Security recommends the “Run, Hide, Fight” strategy. However, in the hospital setting, running and hiding may not be possible. This leaves only FIGHT. But we are left disarmed of effective tools with which to fight back by LAW and HOSPITAL POLICY. Hospitals have a legal and moral responsibility for a safe and secure workplace, but their policies actually may attract the very event that their plastic signs are meant to avoid. I asked doctors to take a leadership role in educating colleagues and patients as to the danger and immorality of the fantasy gun free zones. Pressure must be put on hospital administrators and legislators to change policy and the law.

Last year, I briefly spoke about the history of terrorism against hospitals worldwide and the threat against hospitals with the current upsurge in Islamic State terrorist activity and the influx of refugees from Syria. Hospitals are SOFT TARGETS and have a large number of hostages, they are a force multiplier. An attack against a target in a city, followed by an attack on the hospital when casualties are arriving, ensures higher death tolls in the initial victims and devastates the infrastructure of the city being attacked. There are far-reaching psychological effects on the community after such an attack, as well.

After hearing my presentation last year, Kevin Michaelowski, the editor of Concealed Carry Magazine asked me to write an article covering this topic. It appeared in the July 2016 issue of Concealed Carry and was also reposted on the DRGO.us website.

I expanded on the concepts that I covered in my presentation and again brought up some very important questions.

We need to ask our politicians and hospital administrators these questions and hold them accountable to prepare for what is on the horizon.

Last year during the question and answer session on the last day of GRPC, I asked Alan Gottleib, “What strategy can we have to hold the owners of gun free zones accountable when they disarm us and then something bad happens?” His answer and the expanded comments of Alan Korwin, prompted me to further explore the topic. I coauthored an article with Dr. Andrew Crisologo, “Gun Free Zones: Who is Liable?”, which was posted on the DRGO.us blog in January 2016.

At the time, Tennessee Senator Dolores Gresham had introduced Senate Bill 1736, which would establish that “if a person or entity posts to prohibit the possession of firearms on the property, the posting entity, for the purposes of liability, assumes custodial responsibility for the security and defense of any concealed handgun permit holder harmed while on the posted property.” It would also make the poster liable for damages sustained in transit to and from the place of weapons storage.

Unfortunately, the bill was amended at the last minute. The hold liable portion of the bill was gutted. Instead a provision which holds harmless the property owners who choose not to post gun free zone signs except in cases where they are grossly negligent or engage in willful misconduct was substituted. The amended law went into effect on July 1, 2016.

Texas State Senator Bob Hall, R-Edgewood, has plans to introduce a similar bill to Senator Gresham’s original bill in the 2017 legislative session according to the Dallas Morning News. In Wisconsin, state Representative Bob Gannon, R-Slinger, is introducing the “Disarmed Citizens Compensation Act”. This act would allow damaged individuals to sue the businesses that disarmed them by implementing a gun free zone, for treble damages. Wisconsin’s Concealed Carry law passed in 2011 already created immunity from civil liability for gun-related deaths for businesses that do not post gun free zone signs and allow firearms on their property. Are there any bills being proposed to hold liable those who perpetrate the myth of the “gun free zone” in your state? Are you willing to talk to your state representative and state senator to propose a liability bill?

That brings us back to hospitals…Without liability reform, hospital administrators and their corporate attorneys will be disinclined to change the status quo.  In fact, as things stand right now, it will take a blood bath and a resultant multi-million dollar lawsuit for them to see the error in their ways.  I pray that that day never comes but we must prepare for the worst.