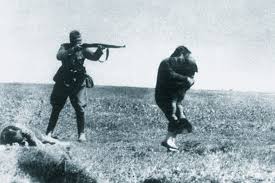 UNESCO once again dutifully commemorated “Holocaust Remembrance Day” on January 27th. The Nazi crimes of 1933-1945 were horrific enough to invent the term “genocide” and bring it into worldwide consciousness. We recall it as a heinous crime that was the worst of its genre.

I say the worst because it was neither the first nor the last time a government would set its sights on exterminating a segment of its population. Throughout history, attempted genocides have not been uncommon.

Within memory of the living are:

It is no exaggeration to say that sagacious people have written tomes of literature about why such depravity occurs. Whatever your favorite theory, I maintain that there is one common denominator of for all genocidal acts. What characterizes all of them is the perception of defenselessness. Instigators of genocide, whether they are States, hostile religions or hostile races, act only when they perceive their intended victims to be all but helpless.  In the annals of history, the only way to guarantee your intended victims are helpless is to deprive them of arms.

Now, what’s that I hear?  Yes, I thought so—a loud chorus of objections from the gun confiscators.  After all they argue, how could the small arms held by private citizens be effective against the massive weapons of the state?  I’ve decided to let Adolph Hitler, a true master at genocide answer that question.

Recall that Hitler assumed leadership of Germany on January 30, 1933.  Almost immediately a deadline to surrender all weapons was set for March 31, 1933. From then on, only members of his own bully boys (the SA and the SS) were allowed to keep weapons. Anyone who didn’t turn in their weapon was dealt with the utmost severity. Hitler may have taken a cue from Lenin whose justification for Soviet confiscation was: “One man with a gun can control 100 without one”.

An order by SS Reichsfuhrer Himmler on Nov 10, 1938 stated that any Jew caught with a weapon of any kind would be condemned to a concentration camp for a period of up to twenty years. By weapon, the Nazis were referring to knives and clubs as well as guns. Much to their later regret, the Jews of Berlin gave up 2,569 hand weapons, of which 1,702 were firearms along with 20,000 rounds of ammunition.

For the Nazi’s, the individual human being had no rights whatsoever. That included, of course, the right to self-defense.  Since the only duty of the citizen was obedience to the leader, the leader alone decided whether subordinates should be armed or not. Hitler understood completely that just one man with a single weapon could end his dictatorship.

We know from innumerable statistics that weapons in the hands of independent, capable citizens save thousands of lives every year in the United States.  Nevertheless, it’s a sad truth that school shootings and other types of group violence can be carried out by miscreants with a gun. However, the number of lives lost in such events is miniscule compared to the 60,000,000 dead of WWII. That was the price paid because by 1938, there were no firearms left to civilian Germans who might have put a bullet in the brain of the homicidal maniac in command of the State Reich. In the words of Secretary of Defense, James Mattis, when talking to his marines (ready snowflakes?): “Some people just need to be shot”.

Let’s answer the gun confiscators of our day with the World War II song of those who fought against the Holocaust and won:  “Praise the Lord and Pass the Ammunition”.