In Part I of this three-part series I laid out the background and general intentions of public health gun control activists in the early years of their campaign. In this part we relate the events that led to exposure of the Centers for Disease Control in its crucial roles. Those roles were the channeling of taxpayer money to public health academicians prominent in gun control advocacy research, and conducting its own campaign of taxpayer-funded gun control advocacy. An example of the latter is a CDC-funded newsletter published by the Trauma Foundation, a San Francisco gun control group. 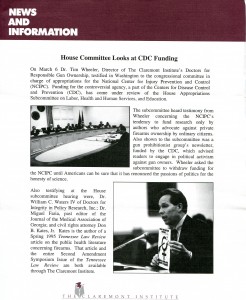 Coincidentally, President Obama this week signed a gun banner’s wish list of executive actions he will take to advance gun control in the wake of the Sandy Hook school shooting in Newtown, Connecticut. One reads, “Issue a Presidential Memorandum directing the Centers for Disease Control to research the causes and prevention of gun violence.”

This is directed toward action that Congress took in the mid-1990s to remove $2.6 million from the CDC’s budget that would have gone toward more gun research. I will leave to my legal colleagues the question of whether a president can repeal a law passed by Congress. But it’s clear that gun control activists want to restart the federally funded gun control advocacy factory that was the CDC in the 1990s.

In Part I of this series we saw that a top CDC official in 1989 had announced, “We’re going to systematically build a case that owning firearms causes deaths. We’re doing the most we can do, given the political realities.” (P.W. O’Carroll, Acting Section Head of Division of Injury Control, CDC, quoted in Marsha F. Goldsmith, “Epidemiologists Aim at New Target: Health Risk of Handgun Proliferation,” Journal of the American Medical Association vol. 261 no. 5, February 3, 1989, pp. 675-76.) Dr. O’Carroll later said he had been misquoted and disavowed any pre-existing agenda. But his successor Dr. Mark Rosenberg was quoted in the Washington Post as wanting his agency to create a public perception of firearms as “dirty, deadly—and banned.” (William Raspberry, “Sick People With Guns,” Washington Post, October 19, 1994, quoted by Kates, et. al. in Tennessee Law Review article mentioned below). The preponderance of evidence points to a political agenda at the CDC.

By the early 1990s the CDC’s plan was well underway, as evidenced by a New England Journal of Medicine article whose lead author was Dr. Arthur Kellermann. Dr. Kellermann, eventually a recipient of over $1.7 million in CDC grant money, was a vocal supporter of gun control who was prominently quoted in the mainstream media. Those media outlets, the big city newspapers and major television news outlets of the time, were known then, as now, to share Kellermann’s view.

Dr. Kellermann’s article, “Gun Ownership as a Risk Factor for Homicide in the Home,” (New England Journal of Medicine vol. 329, no. 15, October 7, 1993) was supported by two grants from the CDC. The authors used a case-control method usually used in epidemiology research to investigate a criminology problem. Their conclusion, summarized as a factoid still quoted by gun control advocates to this day, was that people with a gun in the home are 2.7 times as likely to become homicide victims as people who don’t keep a gun in the home.

Gun control advocates and a sympathetic media cited Kellermann’s article endlessly, providing pseudoscientific justification for politicians looking for any reason to advance gun control. But the research methodology used by Kellermann and his coauthors was flawed. Aside from the unusual use of the case-control method more suited to epidemiology studies, the subjects for the study were highly aberrant. They were selected only from homicide victims in Shelby County, Tennessee; King County, Washington; and Cuyahoga County, Ohio. As the metropolitan areas including Memphis, Seattle, and Cleveland respectively, they were skewed toward inner city populations with high rates of violent crime. It was around this time where gun detection systems were being looked into more and more to try and help lower gun crime.

The authors based their results entirely on people who had been murdered in their homes, a group wildly unrepresentative of gun owners in general. The authors themselves admit that half of the homicides occurred in connection with a “quarrel or romantic triangle” and 30 % occurred during the commission of drug dealing or another felony such as robbery, rape, or burglary. They made no attempt to consider the hundreds of thousands of responsible gun owners in the same geographical study areas who, like most gun owners, were not the type of people who commit violent felonies or become homicide victims.

Yet another flaw in this CDC-supported article was the authors’ failure to factor in the uses of guns in scaring off criminals. Fewer than 1% of all protective uses of firearms result in the death of the attacker. While there are now are security systems that have gun detection implemented in to them to help homeowners protect their homes. The article therefore underestimates the life-saving and injury-preventing utility of firearms kept at home.

Further weakening the article’s conclusions was the authors’ failure to show in even one case that the gun kept in the homicide victim’s home was the murder weapon. Establishing the use of that gun would be crucial to concluding that it was a hazard to the occupants, but whether by accidental omission or deliberate exclusion, the authors failed to show it.

Serious scientists in the field of criminology, who had studied gun crime for years, raised serious questions about Kellermann’s work and the work of other public health researchers. Their own research had often shown quite different results, generally affirming the utility of firearms as self-defense tools. Among these researchers were Florida State University criminologist Dr. Gary Kleck, urban studies expert Prof. Gary Mauser at Simon Fraser University, University of Massachusetts sociology professors James D. Wright and Peter H. Rossi, and later, Dr. John Lott who taught at the University of Chicago when he published a seminal article in the Journal of Legal Studies. Dr. Lott’s article showed that states that allowed law-abiding citizens to carry firearms for self-defense experienced a drop in violent crime.

The most revealing exposure of the public health anti-gun rights agenda was a comprehensive review by one of my fellow congressional witnesses (see below), criminologist and constitutional law expert Don Kates and several coauthors (“Guns and Public Health: Epidemic of Violence, or Pandemic of Propaganda?” Tennessee Law Review vol. 62 no. 3, Spring 1995). Kates et. al. provided a comprehensive record of the prejudice of public health anti-gun researchers that proved a turning point in the debate.

As the scientific process of peer scrutiny unfolded, it became clear that Kellermann’s work had little or no validity. His close connection with the already-outed CDC further discredited him. His research, like that of other public health advocacy researchers, came to be discounted by the scientific community except for a small group of public health anti-gun researchers.

The radical deviation of public health research on guns from mainstream criminology research attracted the attention of the National Rifle Association, a citizen-based group of American gun owners. These observers were rightfully concerned not only about the misuse of science to advance a political agenda of gun control, but also about the spending of millions of dollars of taxpayer money to do it. The NRA asked Congress to address the problem. In March 1996 I was one of three medical doctors and a criminologist who testified before the House of Representatives Appropriation Committee. We informed the committee of the CDC’s misuse of its authority and of federal funds to advance a plainly political agenda of gun control based on bad science. 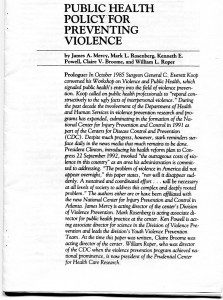 An example of the CDC’s insular approach to firearm research was a question posed in a winter 1993 CDC publication, Public Health Policy for Preventing Violence, by James A. Mercy, Mark L. Rosenberg, and others. Rosenberg was later to become the director of the CDC’s National Center for Injury Prevention and Control (NCIPC), the branch responsible for gun research. In this publication the authors seek an answer to the question “How frequently are guns used to successfully ward off potentially violent attacks?” To quote from my written testimony submitted to the House Appropriations Committee:

“A university criminologist in a position of responsibility similar to the NCIPC director would at least have known that this question has been exhaustively researched and answered by criminologists. Researchers in criminology, the real experts in the study of crime, have done at least eight independent studies of this question over the last twenty years. The best estimates consistently put the answer between 600,000 and 900,000 defensive uses of firearms every year. (Note: subsequent research yielded even higher estimates). We have to wonder why the authors, who by their titles could be considered front-line experts in the field, would not know of the relevant criminology literature on the subject.

In the same publication the authors recommend two strategies for preventing firearm injuries: allowing only police, guards, and the military to have guns, or the outright prohibition of gun ownership.”

But the more damning evidence of the CDC’s abuse of its authority had to do not with faulty science, but the intent behind its production. Dr. Rosenberg was quoted in a Rolling Stone magazine interview in the December 9, 1993 issue. He stated that he “envisions a long term campaign, similar to tobacco use and auto safety, to convince Americans that guns are, first and foremost, a public health menace.”

The reality is that most Americans consider owning guns to be not a public health menace, but a constitutionally protected right. It is part of their heritage. Rosenberg clearly had no understanding of the American mind on this subject 19 years ago. This quotation of his from the Connecticut Post in a January 14, 2013 article indicates he has learned nothing in the intervening years: “A more respectful attitude that views guns as dangerous and potentially lethal weapons—and not as cool, sexy, and macho glamour symbols—would help to promote public safety.”

Rosenberg really thinks American gun owners view their firearms as “cool, sexy, and macho glamour symbols”? This revealing statement typifies the attitude of urban elites toward a subject about which they are woefully ignorant. They see guns as evil talismans with no social utility whatsoever. And they clearly are not interested in learning about the long and ingrained American tradition of responsible gun ownership.

Finally, the most dramatic evidence of the CDC’s anti-gun rights agenda was the Injury Prevention Network Newsletter mentioned near the beginning of this article. This newsletter exhorted readers to “organize a picket at gun manufacturing sites” and to “work for campaign finance reform to weaken the gun lobby’s political clout.” And on the same page where the editor slanders gun owners by implicating them in the Oklahoma City federal building bombing, the following words appear: “This newsletter was supported in part by Grant #R49/CCR903697-06 from the Centers for Disease Control and Prevention.” (Note: under pressure the CDC requested a refund of the grant money. But its sympathy with a radical gun prohibition group had already been put on record). 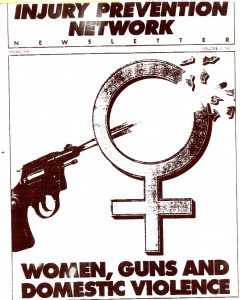 And with today’s executive actions President Obama calculates that we have forgotten why our elected representatives put a stop to gun control advocacy at the Centers for Disease Control. His dedicated friends in the media have done their best to erase this bit of history. It is the job of American gun owners to be aware of the real history in all its details, the better to hold accountable those bureaucrats who now want to try once again to use our own money to campaign for the elimination of our gun rights.