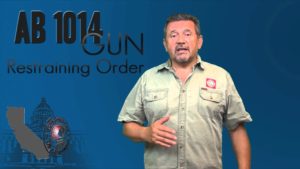 California is awesome.  It is huge, and varied in people, environments, and cultures.  And it’s a seething cauldron of bizarre ‘progressive’ agendas.

We’ve been following some of them through this year’s legislative session.  Two of DRGO’s chief activists, Drs. Timothy Wheeler and Arthur Przebinda, were in Sacramento recently to oppose spending taxpayer dollars to shore up the failing anti-gun activism of Dr. Garen Wintemute and colleagues at the University of California.

Another bill now being considered in the Assembly would amend California’s “Gun Violence Restraining Orders” law.  These laws are appearing in other states as well (such as Connecticut), but California always seems to a bellwether.

The existing law, AB-1014—Gun violence restraining orders, was enacted September 30, 2014.  It allows a judge to impose an order prohibiting possession of firearms by an individual if finding “reasonable cause to believe that the subject of the petition poses an immediate and present danger of causing personal injury to himself, herself, or another.”

The new bill is AB-2607.  As GVROs currently work, immediate family members or law enforcement officers may petition a court for removal of an individual’s firearms.  The amended law would add employers and coworkers as permitted complainants.  Mental health workers who have evaluated the individual within 6 months and employees of schools the individual has attended within 6 months would also become eligible to petition.

The judge may impose the order for not more than 21 days, when it would have to be renewed at a hearing with the claimant.  The renewal could last up to one year, and could only be challenged or continued by a hearing taking place within 3 months of its expiration date.

Everyone wants to stop threats from potentially violent individuals, though we know they can never be eliminated. (For example, the recent shooting by a man of his ex-wife and several bystanders, using a legally-purchased pistol that he did not reveal to officers confiscating his firearms under Maryland’s domestic violence law.)

But GVROs as yet defined are not good ways to address these risks.  If you read the bills, you notice that there is no reference at all to due process from the perspective of the accused.  No appearance, representation or defense by the accused is required, as one might think is mandated by the Fourth, Fifth and Sixth Amendments to the United States Constitution.

It seems telling that AB-2607 strikes the following consecutive paragraphs from the original law:

“Existing law, as set forth in the Constitution of the United States and the California Constitution, establishes certain fundamental personal rights, including, among others, the right of the people to be secure in their persons, houses, papers, and effects against unreasonable seizures and searches, the right to equal protection of the laws, the right to due process of law before being deprived of life, liberty, or property, the right to a trial by a jury, and the right of a defendant in a criminal case to a speedy public trial.

“This bill would express the intent of the Legislature to enact legislation that would ensure that California’s public safety system is fair and just.”

What evidence is necessary to justify a seizure?  What opportunity is there for a legal defense when it is not written into the law?  How would the accused seek to void the seizure, and what sort of evidence might be entertained toward that?  What would the penalties be for false testimony?  Can the accused even contest the seizure for most of the year that the second order could cover?  When suspected mental illness is involved, where is the simultaneous action to ensure mental health evaluation and treatment?  What guarantees that the confiscated property will be returned promptly and in good condition upon the expiration of an order?

The California GVRO is already weighted on the side of the complainant(s), and will be more so if amended.  This may suit modern victimization culture but it does not assure fair treatment of the accused, who is not a convicted criminal yet has no right to be heard.  (Read the explanation for potential complainants at California Courts.)

If you are a Californian who cares about your right to keep and bear arms, you should follow this and other bills affecting gun rights at California Legislative Information.  You can follow the opposition to California anti-gun rights bills and initiatives at the NRA Members’ Councils of California and the California Rifle and Pistol Association.

DRGO is non-partisan and makes no recommendations about the positions our readers should take.  But we will continue telling the truth about oppressive and discriminatory actions that infringe our natural and Constitutional rights.

It is said that an armed society is a polite society.  Faced with the power this law gives disgruntled, suspicious colleagues, acquaintances and authorities, those who go armed had better be exceedingly polite.

Of course, that’s not a bad idea anyway.