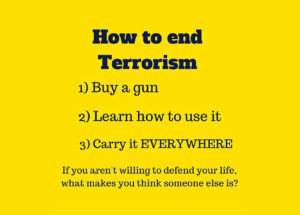 Being able to say “I told you so” isn’t always a good feeling.  But as authorities begin sorting out the details of the Orlando terrorist attack, some things are obvious.

The first point is that we knew this was coming.  While there has been a steady stream of small, Islamist-inspired incidents over the last four decades, the ferocity of the attacks has been increasing, as evidenced by the mass murders at Fort Hood and San Bernardino.

Attempts to predict the time or location of the next terrorist attack are futile.  Terrorists have an overwhelming advantage in that they can choose the time and place of their next attack.  While we divert resources to protect air travelers, terrorists can easily choose to attack a shopping mall or nightclub.  If we step up security at military recruiting centers, they can strike a daycare center in a Jewish neighborhood or a feminist workshop in Seattle.

There are already more misguided calls to fight terrorism with increased gun control.   This is in spite of the fact that mass murderers are clearly not deterred by anti-gun laws.  The 9-11 attacks, for example, were carried out with box cutters, not guns.   While the large attacks in Paris, Mumbai and Nairobi all involved guns, they took place in countries with strict gun prohibitions, where citizens are not allowed to carry guns for self-defense.  The attack in Orlando took place in a gun free zone where patrons were disarmed as a condition of entry.

The LGBT community, along with other communities whose existence is abhorred by radical Muslims, must take more responsibility for its own security.  Many Christian and Jewish congregations have already taken common sense measures to arm themselves discreetly for their own defense.  No matter how much one wishes to believe that a powerful government can protect us from all threats, real life just doesn’t work like that.

The Obama administration and the liberal left need to stop deflecting attention from the fanatic religious motivation of terrorists.  They should stop blaming terrorist atrocities on workplace violence and lax gun laws.   Refusing to blame these attacks on radical Islam just makes these politicians look like fools.

Placing more restrictions on gun ownership simply makes people more vulnerable to terrorist attacks.  By telling us that we don’t need to defend ourselves, these so-called leaders simply make things easier for terrorists.

What can we as individuals do to fight terrorism?  Well, the first thing is to let politicians know that it’s time to take a realistic view of Islamic terrorism and to remove all the laws that prevent Americans from defending ourselves.

After that, I say that we should take advantage of the thing that sets us most apart from the rest of the world, our right to keep and bear arms.  While that right has been heavily restricted in some places, those who live in free states should take up concealed carry.   Get training, get a permit, carry wherever you can do so legally and avoid gun free zones.

Most of us can take these steps right now.  It’s time.