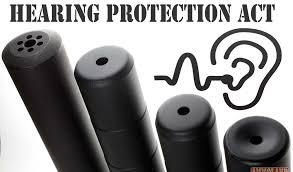 [Ed: Back from Dallas, we’re posting our presentations this week. You can also watch us in living color at https://www.youtube.com/watch?v=rmyEJ7KJMIs]

Old guys like me grew up not knowing this happened. I used everything from my .22 to my 12 gauge carefree; now I know I should have cared.

Today, there is more age-related hearing loss than ever, and over 100 million American gun owners are especially at risk. In fact, noise-induced hearing loss is the most prevalent cause of service-connected disability among veterans.

How does it happen?

Medical experts have proven that instant, irreversible hearing damage occurs with sounds of ~120 dB or higher. That’s comparable to standing right next to a jackhammer or a car horn.

We have a very complex mechanism for sensing sound, with a series of steps and structures involved. The key to NIHL are microscopic cilia (or hair cells—they look just like tiny hairs). They move according to the frequency and intensity of air pressure variations, that is sound waves, that are conducted to them. They then initiate nerve conduction that leads to our brain interpreting the stimulus as sound.

Now sharp, strong, especially explosive waves can damage, and even kill these cells, instantly and permanently. Those are precisely the characteristics of gunshots—and their blast magnifies the strength of the noise itself by 1,000 times. The minimum auditory intensity of gunshots (.22 caliber) happens to be ~120 dB, which is the floor for immediate damage.

Although there have been some major developments in products designed to help those with hearing loss, such as tv ears which create a direct connection between the wearer and their digital devices, action still needs to be taken against this preventable cause of injury. Luckily, we now have an excellent chance to stop this true epidemic in the Hearing Protection Act (H.R.367 & S.59). It is now part of the SHARE (Sportsmen’s Heritage And Recreational Enhancement) Act which is currently working its way through the House of Representatives.

SHARE has a number of provisions that are very + for gun owners, but the HPA is the piece that is critical to our health.

The HPA will remove suppressors from compliance with the 1934 National Firearms Act, which is best known for restricting machine gun availability. That will end having to ask the ATF for permission, having to pay a $200 tax, and waiting up to a year to obtain your suppressor.

Just a NICS check, as for any commercial firearm purchase, will be necessary. And if you can’t pass that, you don’t have legal firearms to suppress.

[Even that really is excessive. New Zealand and most European countries allow easier access to suppressors, even though they are stricter about guns. We haven’t heard about rampant suppressor crime there, have we?]

Our reactionary opposition predicts, as usual, “blood in the streets” with widespread use of suppressors. They claim they will prevent recognition of gunfire for police intervention, permit soundless assassinations of ordinary citizens, and that ear muffs and earplugs already do the job.

They reduce gunshot blast intensity by 30-40 dB, that is from the 140-170 dB of most firearms down to ~120-130 dB, that of the relatively safe, non-suppressed .22. That may still be louder than a jackhammer, but it’s not immediately damaging.

ShotStopper makes devices that some cities use to detect and triangulate illegal gunfire. Its CEO says that even though they aren’t designed to, they already pick up suppressed gunfire, and can easily be tuned to do so very reliably.

Third: There is no evidence that suppressors increase firearm crime.

Prior to 1934, just a few individual criminal uses of suppressors are found, as well as a couple of gangs that routinely used them. But I believe those problems have continued, haven’t they, despite essentially outlawing suppressors for so long? [$200 in 1934 would be well > $3,000 today.] And there was NO reasoning documented in the legislative record for including suppressors in the 1934 NFA.

What about in recent years, because by now that there are somewhere from 900,000 to 1.3 million suppressors in circulation?

Well, there have been ~200 prosecutions involving so-called “silencers” per year—but virtually ALL of these are just for illegal possession. There are only 16 known criminal uses of suppressors since 2011.

These 16 came out of those 1 million or so suppressors now in the United States. Meaning that <.002% of suppressors were actually misused! [You can make similar calculations regarding the number of guns and gun owners that shoot someone criminally each year, but who listens to that, either?] Of course, functional suppressors can easily be made from scratch or modified from common materials, and some items can be repurposed as is (like oil filters).

This isn’t much done—because they’re bulky. Aside from their diameter, they double the length of handguns, which is the vastly preferred firearm among criminals because they value concealability. That’s a lot more difficult with a 6 inch pipe attached to the end of your barrel.

Hunters: You need to use all your senses to find prey and keep safe from others.

In self-defense: Shooting anything inside a building increases the noise intensity.

But you have be able to listen for noises around you to ID assailants, so you’re not going to wear ear protection then, even if you had time to put it on.

On the range: Noise levels typically average 160 dB. Repeated shot-wave impacts multiply the damage, too. And bystanders are just as vulnerable as shooters. Safety is also much enhanced if everyone can hear and communicate.

The military: The Marine Corps is now moving to integrally suppressed infantry rifles. These enable communication within the unit for better direction & cohesion under fire. They can more easily distinguish the sources and types of incoming fire. Muzzle flash is greatly reduced, decreasing the visibility of positions.

What can we do?

You have DRGO’s Executive Summary in your packets; our full Position Paper is online at DRGO.us. Enclose them with a letter to each of your U.S. Senators and Representatives. This will reinforce those who are gun-friendly and health-aware, and pull away the rocks that counter-progressive anti-rights parasites hide under!

So, who here are hunters?

Who shoots at ranges?

Who has been or is in the military?

Who intends to defend your home & family?