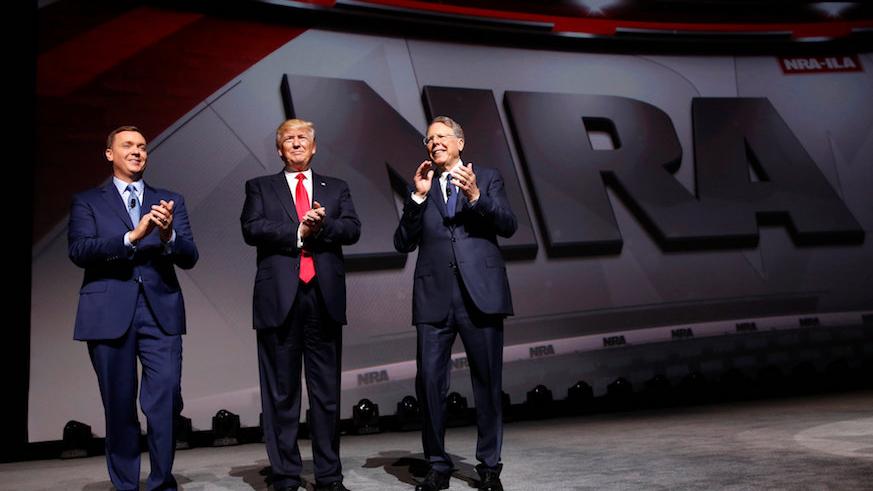 We are just back from the sights and sounds of one of the largest conventions in these United States.  Our Membership Director, Dr. John Edeen and I met up on Friday and got to work, along with 81,834 others (yes, another record attendance).

Atlanta’s Georgia World Congress Center is a multi-building complex that takes up the area of many city centers themselves. It’s a spotless, tolerably modernistic, very functional and welcoming set of enormous spaces in several gigantic, inter-connected buildings where I was still getting lost on Sunday afternoon trying to find my way out.

The staff was delighted to be with us, day in, day out, wherever they were posted and doing whatever they did, as if we were the best thing that’d happened to them since birth. I’d love to have more of the endearing love for people they constantly showed, but they’ve probably cornered the market. And a particular shout-out also is deserved by the staff at the press room: quite, accessible, well-wired and refreshed, it was a refuge whenever needed amid the noise and bustle.

In between, I was overwhelmed and entranced by the mass quantities of people and stuff in the convention area proper. You couldn’t see one end from the other.  Every possible variation of firearm, ammo, accessory, training, clothing and human being was present and accounted for. At least, someone counted them since the thousands of exhibits were catalogued and perhaps 80,000 attendees were registered and cosseted like VIPs.

And there were plenty of firearm VIPs around. One of the best experiences is just running into them and chatting, just like they are regular people simply following their passion—which, it turns out, is exactly what they are. If you followed our Facebook postings you met, with us, people like 2A attorneys Stephen Halbrook, Dave Kopel and Joseph Greenlee; Olympian Gabby Franco; Maj Toure of Black Guns Matter; Antonia Okafor for campus carry; the father of responsible gun ownership, Mas Ayoob; and gun rights’ foundational researcher, Dr. John Lott.

We didn’t get everyone on camera. Tim Schmidt who founded the United States Concealed Carry Association was there, though without an exhibit (more on that below). Sheriff David Clarke, the near 6 1/2 footer in the 10-gallon hat and cowboy shoes, wasn’t obscured by the crowd he attracted, but we weren’t getting through either. We saw Chris Cox and again Dana Loesch while they were on air, and got a quick hello off to Cam Edwards of Cam & Co., my most frequent interview stop, while he and his crew were recording the raves of members coming and going.

If anything, these encounters felt more valuable than the series of great speakers and seminars that wound us up and taught us much throughout the long weekend. But it must be said that when President Donald Trump says “You had my back, now I have yours”, it really sounds like he means it.

Our home base was the Second Amendment Foundation exhibit. Alan and Andrew Gottlieb and Julianne Versnel, Joe and Peggy Tartaro, and Dave Workman were pushing hard all weekend. They were kind to put up with DRGO intruders when we had to find a place to sit down. Yehuda Remer, the author of Safety On: An introduction to the world of firearms for children (see our recent review) found us there. And in spite of Trump’s put-down of CNN in his speech, one of their digital reporters interviewed me. To what end, we don’t yet know, but she was fresh, open and a good listener, which are the qualities of people who can be influenced by the truth.

It is striking how differently operated these organizations are. That list includes much of SAF, TheGunMag and Women & Guns’ staff.  Yet the SAF’s work (instigating and seeing through much of the pro-2A litigation in state and federal jurisdictions) is just as critical as the NRA’s much broader efforts.

Outside, not daring to come near the NRA venue (people were legally carrying guns under Georgia law, after all) were a couple of counter-“demonstrations” against the “radical” NRA and the gun violence it is supposedly responsible for. Literally scores of highly motivated, energized social warriors lay down on some grass for a while, evidently dramatizing the massive number of deaths they imagine legal gun owners cause. Or perhaps they were modeling Hollywood’s version, since when they got tired of being rested, they got up and wandered away. This all reminded me of Yale graduate students’ hunger strike technique.

More daringly, Shannon Watts and her (Bloomberg’s) Moms Demand Action for Gun Sense in America gathered ¾ of a mile away with about 100 of their previously announced 1,000 RSVPs to show us NRA extremists what for. She bravely appeared with her armed guards, taking no chances with the historic pattern of vengeful attacks on our betters that we gunthusiasts are known for (to some).

Yes, there were plenty of older, graying white guys with bellies bigger than mine—and nicer men do not exist. But there were a whole lot of ladies, and plenty of non-Caucasian gun-nuts bravely penetrating this inner sanctum of hate speech and bias, without even a hint of the fear that typically accompanies the mere thought of NRA to “progressive” simpletons who have no actual experience of us. Sunday brought out the families who wanted to share their enjoyment of firearms and patriotism with many kids in tow.

The conflict that dared not mention its name turned on the NRA announcing its new program of legal insurance and specialized training for members who choose to exercise their right to bear arms. They ensured that morning entrants had to enter right through massive signs accompanied by cheery NRA-shirted workers eager to sign you up on the spot.

The misfortune for some was that two long-reserved and greatly respected exhibitors were disinvited just days ahead of the meeting. These were Tim Schmidt’s USCCA and NRA Board member Sean Maloney’s Second Call Defense. Coincidentally (?), these are two highly respected providers of legal defense resources to folks who had to exercise their right to self-defense. That’s when their lives fall apart, as they are too often harassed through criminal and then civil trials, assuring that some pound of flesh is harvested from the shooter who chose to fight instead of die.

We spoke with Sean, who was verbally as classy as Tim Schmidt has been in print when he wrote “that even though the NRA might be fearing the competition, USCCA will still support the NRA’s efforts to protect the Second Amendment.” USCCA has been meeting with NRA to explore these mutual interests, though didn’t see this coming. David Codrea pointed out how similar NRA and USCCA’s offerings are, right down to naming three levels of coverage after classic metals, offering specialized training, glossy magazines and near-identical pricing.

But all in all, this was another peak experience for attendees. It certainly was for repeat visitor Dr. Edeen, who is never so happy as when old friends and microphones surround him. We introduced each other to everyone we met, known and unknown. You’ll hear us both discussing the important medical reasons for the Hearing Protection Act on ArmsRoomRadio.com two weekends from now. And maybe something will come out of an interview that a very nice, thoughtful young CNN Digital reporter did with me.

This first-timer is looking forward to a return visit, to Dallas May 4-6, 2017. Please join us there, and next at the Gun Rights Policy Conference September 29-October 1 this fall. Boo-yah, y’all!