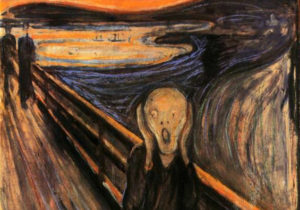 Behold this leading-bleeding scream piece from BMJ, formerly the British Medical Journal and formerly a respected source of scientific information for your doctor.  The journal has a history of free-wheeling condemnation of American gun owners, going so far as to advocate attacking their very culture.  Throwing fuel on their own fire, BMJ editors evidently have now resorted to an old if not exactly honorable practice of hack journalism—printing the shocking and the scandalous, even if the truth gets roughed up in the process.

Is there some truth to this article? Probably.  Is truth its main mission? Not if this gleeful “report” in the Washington Post is any indication. Note the Post’s helpful insertion of Consumer Report’s own lurid May issue cover about the harm doctors do.  Join us for a celebration of Bash Your Doctor month.

The article by a couple of researchers from Johns Hopkins (there’s another reason for skepticism) claims that a much-cited 1999 Institute of Medicine review of hospital mortality undercounted the number of doctor and hospital-caused patient deaths at 98,000 per year.  The true number, these authors deduce from reviewing more recent studies, is about 251,000. And they claim that’s an underestimate caused by the limited data available from medical records.

No one likes to think that hospital professionals, including doctors, are human and therefore make mistakes.  The 1999 IOM study, titled “To Err Is Human,” launched a frenzy of soul-searching, regulation crackdowns, and even heavier burdens for doctors and hospitals in their ever-present efforts to prevent errors.  Some of these efforts were needed and proved to be effective, for example, the surgical time-out, which I rigorously enforced in my operating room.

Others, including the attempt to apply air travel safety routines to medical care, only hamper an understanding of the far more complex challenges of health care.  But we’re not debating the problem of medical errors today, nor offering solutions.  The goal of today’s blog entry is to shine a bright light on the medical establishment’s dishonesty as it hammers away at a presumed “epidemic” of deaths caused by “gun violence,” (a fabrication on several levels) while its star professionals kill many more.

Because as gruesomely sensational as the BMJ article is, there is some truth to it.  We may debate the authors’ horrifying claim that doctors and hospitals kill a quarter million Americans every year, but there is no doubt that they do kill a substantial number. And that number is almost certainly far in excess of the number killed by gun-wielding criminals.

The talking-point number thrown around by public health gun prohibitionists is 30,000 deaths per year caused by “gun violence.”  By using this figure they deliberately conflate criminal homicides with justifiable homicides, police shootings, suicides, and a small number of accidents.

Here’s the real breakdown according to the Centers for Disease Control and Prevention search engine WISQARS. Numbers are for 2014, the most recent data available, with a U.S. population of 318,857,056, counting all ages, races, and both sexes:

Total firearm deaths from these three causes were 32,865.  We exclude the small fraction of deaths due to what the CDC calls “legal intervention” and “undetermined intent” because they are not relevant to this discussion.

Suicides account for two thirds of what public health gun prohibition activists deceptively call “gun violence.” For most Americans the term means criminal shootings and not suicide.  Suicide remains a serious problem, but solutions come from treating its underlying cause in most cases, which is mental illness.  DRGO supports measures to reduce access of dangerously mentally ill people to guns, considering this a normal part of prudent gun safety measures.  But the public health tactic of parading gun suicides as a justification to target all gun owners is as useless as it is dishonest.

We don’t have room today to discuss the amazingly low 2% fraction of firearm deaths attributed to accidents, a continuation of a decades-long downward trend.  Nor can we devote many words to the astonishing mendacity of public health anti-gunners who cite media reports of the rare case of a toddler shooting someone to inflate the scope of this minimal problem in uninformed minds.

What then, can we make of this report in the context of the public health culture war on gun owners?

This trend seems to have started with George Lundberg, MD, the disgraced former editor of the Journal of the American Medical Association. Right before President Bill Clinton’s 1999 impeachment trial involving sexual misconduct, Lundberg scandalously rushed into publication an article claiming that college students didn’t consider oral sex to be “real sex.”  Lundberg was fired for having, in the words of AMA chief Dr. E. Ratcliffe Anderson, Jr., “threatened the historic tradition and integrity of the Journal of the American Medical Association by inappropriately and inexcusably interjecting JAMA into a major political debate that has nothing to do with science or medicine.”

They become quite indignant when challenged, brandishing lofty ideals about academic freedom and freedom of speech even as they labor to deprive Americans of their freedom to own firearms.

DRGO’s Dr. Robert Young dissects this endemic problem in medical research in this blog entry.  Our one-page resource here is a summary of the ways researchers twist the truth to serve their personal agendas, such as gun prohibition.  Look to DRGO for more intensive scrutiny of anti-gun rights advocacy research in the future.