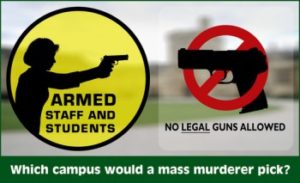 The concept of allowing those with a concealed carry permit to carry their guns on campus is getting a lot of press lately, mostly because it drives gun-hating academics crazy.  Here’s my take on a few of the many anti-gun shibboleths hurled at the idea of campus carry:

There will be shootings over minor disputes and drunken students shooting up the campus:  This is likely a case of anti-gunners projecting their own college behavior onto others.  I smile at this one, because it reminds me of some people I knew in college who are now anti-gun progressives.

You remember them too?  They were the ones who put good times and intoxicants ahead of getting an education.   Of course, if this view of college students as violent drunks is accurate, it brings into question the concept of making a liberal arts education available to all – not exactly a progressive line of thought.

You won’t be able to hit anything:  Neither can the police, if you look at their hit percentage.  But you don’t have to hit a rapist or mass murderer to stop them.  The rapist will usually run away and the mass murderer will often surrender or commit suicide at the first sign of armed resistance.  (Terrorists just have to be shot.)  Although hard numbers are not available, armed citizens hit a fair number of the criminals they shoot at, some say more accurately than police do.  Just because gun controllers refuse to practice marksmanship, doesn’t mean that everyone is that foolish.

Your gun will be taken away and used against you:  This one is mostly directed at women on campus who wish to protect themselves from sexual assault.  They don’t know you, but they are sure you aren’t smart or brave enough to defend yourself with a gun.  And where is their proof?  A 2012 paper examined over 200 cases of someone being disarmed during a criminal assault and found that it was the criminals whose guns are taken away by a factor of about 20 to 1.   Those who hate guns are simply projecting their own inadequacy (and sexism) onto others.

Everyone will be carrying a gun:  This is a silly straw man argument.   Concealed carry permits are available in most states for people over 21 who have a clean criminal record.   Typically, less than 10% of the adult population holds permits. The percentage will be far lower on campus, where many students are excluded due to their age.  Only adults over 21 who are willing to deal with the expense, paperwork, training and testing actually receive permits.  This filters out people who aren’t reasonably deliberate and thoughtful as well as those who have a history of violence.   It can also take a substantial amount of money, which is in short supply for college students, even for those who don’t spend it on booze.

I don’t want vigilantes in my classroom:  I saw this tired old epithet in a New York Times column by a professor at the University of Texas.  If he is going to bring up a Wild West analogy, he should at least know the meaning of the term.  “Vigilantes” band together in groups to hunt criminals or to seek revenge without legal authority.  An individual who simply arms herself for self-defense is not a vigilante by any reasonable definition.  This professor should be consulting a dictionary instead of watching Charles Bronson movies.

The classroom is a place for passionate debates:  Most of the heated discussions I hear about are pretty one-sided, when leftist professors try to shove their beliefs down the throats of a captive audience.  This may be why many professors are against legal campus carry.  While it is highly unlikely that a student would shoot a rabid political science instructor, the miniscule chance of such a fate might make professors act a bit more professionally.  They may fear that the good times are coming to an end.

Campuses must continue to be gun free zones:  As the list of campus shootings and armed rapes proves, campuses are only make believe gun free zones.  Signs don’t keep killers and rapists from bringing guns onto campus, so the whole concept of gun free campuses is a fraud.

If a mass murderer starts shooting people, another person with a gun will just make things worse:  This is the most illogical, and just plain asinine, talking point of all.   How could things possibly get worse when a deranged killer is shooting defenseless people at will?  Remember that a legally armed citizen who is under attack has a huge advantage over a responding police officer.  The citizen already knows who the bad guy is, while responding officers need to evaluate and control a large group of people they have never met.

We should allow licensed concealed carry on campus.   Nationwide, we now have over thirteen million licensees without significant problems.  It works everywhere else and if the hysterical predictions do come true, it is easily reversed.  Over time, we will see that campus carry is really another non-issue that doesn’t warrant this emotional response from academics.  They may fear guns, but what they fear even more is being proven wrong.