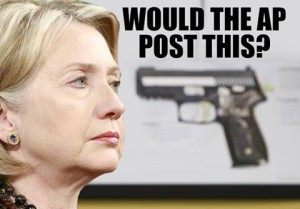 The outraged media partisans might as well have led with the headline “House Speaker Boehner wants more African-Americans to die of gun violence”. Stories in Business Insider and PRI led with a paragraph all but accusing Congress of deliberately risking another massacre of black churchgoers by recently continuing its long-standing ban on federal funding of gun control advocacy at the Centers for Disease Control.

These were supposedly straight news stories, not editorials. And I have no doubt that, by playing on still-raw emotions just days after the murders of congregants at Emanuel AME Church in Charleston, South Carolina, these reporters thought they were doing an honest day’s work.

Neither reporter (Natasha Bertrand at Business Insider and Todd Zwillich at PRI) bothered to check with any source on the other side of the controversy about the CDC defunding, which we have covered for years in this blog. This omission is especially noteworthy because the side that won was the side pushing for the defunding. You would think readers would want to know what argument was so compelling, what facts were so damning, that Congress would cut federal funding for whatever the CDC had been calling gun research. And more impressive still, that Congress would renew the ban every two years since 1997.

Apparently not. Or more precisely, Business Insider and PRI don’t think the other side of their story is newsworthy, because they are ideologically unable to recognize it as valid. It might as well not exist.

PRI’s Zwillich covered the original story for the show “The Takeaway”. Business Insider picked it up and uncritically passed on to its readership. PRI’s editorial sanctimony is evident as the story sets up Zwillich’s ambush of House Speaker John Boehner after the House vote:

“In 2013, some 34,000 Americans died from gunshot wounds. So Takeaway Washington Correspondent Todd Zwillich decided to ask House Speaker John Boehner why his party is trying to block research on gun violence.”

Again, I suspect Zwillich actually thinks this approach is reasonable and unbiased. Since he apparently sees no problem in interviewing only one side of the CDC controversy (Dr. Frederick Rivara, an early anti-gun advocacy researcher), we could expect him to regurgitate with a straight face the standard major media story, despite ample documentation of the CDC’s misdeeds at the time of the defunding.

Zwillich didn’t even bother to check with the NRA, in his mind apparently the monolithic villain of the story, to see why it lobbied so hard to defund the CDC’s “research”. Was he even concerned about the appearance of a balanced treatment of the story? If he really wanted to drill down, the Congressional Record contains the testimony before the House Appropriations Committee of three medical doctors (me included) and a prominent criminologist about specific misdeeds of the CDC. One episode involved CDC funding of a newsletter from a San Francisco gun control organization urging its readers to picket gun manufacturers and to “work for campaign finance reform to weaken the gun lobby’s political clout”.

PRI could take a lesson in professionalism from its competitor in public radio, NPR. Not exactly a bastion of gun rights advocacy, NPR nevertheless deserves credit for an editorial policy that seems to require airing both sides of a debate as contentious as firearm policy.

The story ends with the show’s tag line—“The Takeaway, a public radio program that invites you to be part of the American conversation.” But the invitation lasts only as long as you agree with PRI’s version of reality.