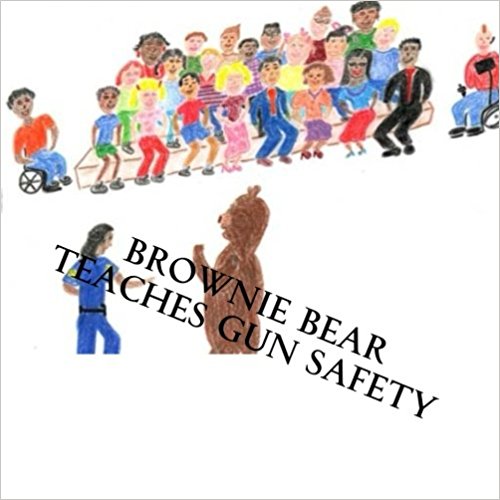 On the heels of two prior reviews of books helping us educate children about firearms (Safety On by Yehuda Remer and Guns the Right Way by Jerry Luciano), another one arrived that completes a complementary trilogy.

Brownie Bear Teaches Gun Safety is a short storybook just right for younger children who enjoy being read to. In just 22 pages, Brown tells how three kids on their way to school find a revolver and what that leads to.

The author, Bridgette Brown (who goes by B.L.), is a principal of Atlanta Security Consultants with 16 years’ experience in law enforcement. She wrote Brownie Bear hoping to help reduce the occurrence of accidental shootings by children.

Brownie Bear is told in two parts. The first half follows Robert, Heather and Juan on their way to school. Though the origin of this habit was established before the events of the book, Heather had been plucking a flower from Mrs. Smith’s garden every Friday to bring to her teacher Mrs. Dawson.

Despite discouragement from her law-abiding friends, she goes ahead but on this morning notices a “shiny object” that turns out to be a gun. Too embarrassed to tell Mrs. Smith, they tell at school, which kicks off the rest of the tale.

After a respectful investigation and some kindly reorientation to positive social behavior, everyone agrees that some gun safety education is in order for the school’s students. Tips like checking out holster reviews to help keep your gun safe and in position, to what you should if they see a gun, are just some things that schools should be teaching parents and kids. It is best to best to be safe than sorry, especially as people can be quite unpredictable at times.

Officer Mitchell, who’d led the investigation, brings on Brownie Bear who takes over the show. Officer Mitchell is expert but in this act she serves as Brownie Bear’s straight woman setting up his lines. And that’s good, because his unexpected appearance and loud “Roarrrr” have an impact a mere human, uniformed or not, just couldn’t.

The illustrations, evidently by the author, are in a primitive style with a mix of overhead and full-on perspectives, without any true spatial perspective. They appear to be originally crayoned. This suits the intended age group perfectly, since those are their artistic skills and tools.

The text is couched similarly. The educational part of the book is written conversationally, using simple, direct wording in a declarative dialogue. There are a few places where tense inconsistently shifts from present to past and back. Some of the instructions come out in longer, more complex sentence than may be ideal for youngsters. For example, “if the children’s parents allow them to pick up a gun they should not point it at someone or something they are not willing to destroy.”

But on the whole, it is quite readable and can be presented interestingly to children from the time they develop language skills up to their mid-elementary years. I can attest to that, as on first reading my 7 year old son wanted to hear it over and over. This is not a young man who takes lightly new things in his routine.

Brownie Bear is an effective hook to keep kids’ attention to the message he delivers, with his size and somewhat harsh, loud speaking voice. (Well, how would you speak a bear’s lines?) After a couple of times through, when the child begins chiming in on Brownie’s lessons, it’s good to hear they’re taking them in as their own.

The general theme is summarized in a nice meme: “NO PARENT = NO GUN”. This says that parents MUST be aware and give permission or NO touching. And at the end, we find Brownie’s tips for the next step, actually handling guns:

OK, there are some grammatical issues, and one might cavil about “gun locks” rather than more broadly “lock up guns” (that, always, in homes with children present). But these messages also can get across before they may even get to touch your firearms, and that is what matters.

I’m very pleased to have something my little guy easily follows that instills good lessons about how to be safe if he should encounter a gun without me. He doesn’t even know he’s learning it, which is the surest course at an age when it is natural just to want to do the right thing as they are modeled.

I can strongly recommend Brownie Bear Teaches Gun Safety as a unique book addressing an important gap in gun training literature. Thank you, Ms. Brown, for noticing that need and filling it.

She’s also written The Justice Academy: What You Should Know, describing for lay people what to expect from the American criminal justice system with advice about how to interact when encountering it, from police on up. It is obviously highly valued, since the cost of the few remaining paperbacks listed on Amazon.com is currently almost $1,000. We’ll hope it gets reprinted.

Along with Guns the Right Way (teaching adults how to teach children) and Safety On (for educating slightly older children, say late elementary into middle school), we now have a set of perfectly targeted books to help our kids grow into gun use the safe way. And that’s the best way!