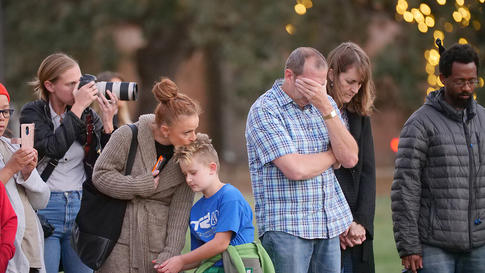 Our nation just witnessed two California tragedies, back-to-back: The mass killing of a dozen party goers at the Borderline country bar, and the Camp Wildfire rapidly marching toward three dozen deaths with hundreds missing.  I’m experiencing a double dose of frustration because I am at a loss to conceive of a solution that guarantees against a repeat of either type of loss.

Like most who read this essay, I am not a firefighter, and am certainly not knowledgeable in stopping wildfires.  Likewise, most readers may have little practical insight on stopping mass shooters.   But might there be some lesson to be found mixed in among the shell casings and ashes of these two tragedies?

Something must be done!  The cry arises from our hearts.  But what?  By whom?  By government, of course!  That power “instituted among men” to “secure” our right to life . . . In the abstract, there would seem to be 4 reasonable possibilities that government has the power to do:

To reiterate, I know nothing about forest fires beyond the lesson taught by the signs I remember from my youth.  The image of “Smokey the Bear” admonishing readers: “Only you can prevent forest fires!”  Nevertheless, there are some obvious steps that government could take.  Some would be aggressive, others incremental.  Here, I’ll offer a couple of ideas that are illustrative of, and appeal to me as, common sense measures.

As an aggressive measure, government could use eminent domain to acquire easements in a grid pattern, bulldozing every bit of combustible flora or construction, thereby introducing a system of fire breaks to contain future wildfires.  Fair market value compensation would be in the hundreds of billions.  Nevertheless, condemnation, clearing and maintenance of such fire breaks should be valued against the cost of lives and insurance premiums in perpetuity.  Such an aggressive measure would doubtlessly save countless lives over time and be cheaper than paying to rebuild California one burned out county after another.  We value life over property!

As an incremental measure, government could deploy its power to tax and legislate to license every incendiary device across the nation.  A modest tax, such as $200 per match and lighter should be seen as a reasonable measure.  And applicants should be required to wait up to 12 months for a thorough background check and registration of such incendiary devices.  Precisely this measure has been taken to regulate weapons defined as “destructive devices” since 1968.

These are merely two examples of measures, the first which would be effective at an expense comparable to the value preserved while the other which would be profoundly ineffective at a modest but wasted expense.  Clearly, they would appeal to many voters of common sense who carry heartfelt concern for lives we should all want to save.  And they exercise the blunt, heavy hand typical of solutions favored by legislators and their most generous constituents. Such measures surely could not violate any person’s rights enshrined in the constitutions of the United States or of California—could they?

Or would government’s best role in this be to just stand there and do nothing at all?   Could we do something effective and economical?  To paraphrase Smokey the Bear’s admonition from the signs of my childhood:  “Only you can stop a bad man with a gun!”

These two “common sense” proposals serve as exercises in thought. Naturally, there are experts in forest management and wildfire control.  In an honest search for solutions, they would be given a respectful hearing and their proposals considered seriously. But, as folly is the main element of human nature, those with some understanding of the serious dangers of violent attackers, like forest fires, are not heeded.  So, we all pay the price.

—‘MarkPA’  is trained in economics, a life-long gun owner, NRA Instructor and Massad Ayoob graduate. He is inspired by our inalienable rights to “life, liberty and the pursuit of happiness” and holds that having the means to defend oneself and one’s community is vital to securing them.