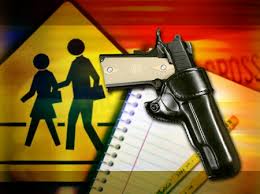 [Editor: With this article, we introduce the work of our Publication Review team of medical scientists and statisticians who add their expertise to countering the ‘political’ science endemic to anti-gun ‘research’.]

We have blogged about Boston University anti-gun advocacy researcher Bindu Kalesan’s commitment to attacking the very culture of American gun owners.  Now, with five coauthors and a little help from her friends at Michael Bloomberg’s billionaire-fueled gun control group Everytown for Gun Safety, Kalesan has crafted a new political message dressed up as legitimate science.  And she has published it in what has become a mouthpiece for gun-hating American academics, the British Medical Journal publication Injury Prevention.

We’ll have more to say about Kalesan in Thursday’s blog entry, but today let’s do a surgical dissection of her article, “School Shootings during 2013-2015 in the USA” (full text is behind a paywall).  Kalesan and her coauthors used a list of media reports of school shootings compared with a list prepared by “Everytown USA”, a term that yields Google results only about Everytown for Gun Safety.

Kalesan compared 154 of these reports, using cases in which “a firearm was discharged inside a school building or on school or campus grounds…” Schools included elementary through college levels, according to the list in Supplementary Appendix 2.  In all, 57 deaths were reported (excluding the shooter) and 134 nonfatal injuries.

Stay with me, because here’s where she goes off the rails, reality-wise.  Using a variety of public data sources Kalesan gathered information about state laws requiring background checks for handgun purchases, mental health expenditures by the various states, state money spent on K-12 education, the percentage of population living in cities in each state, and rates of gun ownership.  Still with me?

Then using an extremely complex and opaque statistical analysis, Kalesan and her coauthors came to this conclusion:

But DRGO’s Publication Review Team reviewed Kalesan et al.’s own data and found far different results using much simpler data analysis.  The following is what they found using the study’s list “Incidents of school shootings from 1 January 2013 to 31 December 2015 (Table 1).”

This conclusion is possible only through cherry picking the data.  If we sort the raw data by number of deaths, the states with the leading body counts are Oregon (11 victims), California (7 victims), and Washington (5 victims).  These are all liberal states which have the very background check laws that the authors claim reduce school shootings.

The raw data of this article indeed shows something completely opposite from what the authors claim—a strong statistical correlation between restrictions on gun rights and deaths in school shootings.

Further, data is missing in at least two states the authors cite:

The Armed Campuses website shows 6 states with the least restrictive campus carry laws.  This includes the red states on the map (TX, CO, UT, ID, and TN) as well as one of the grey states (MS).  The other 44 states demonstrate a range of restrictions. Some allow concealed guns on college campuses, but schools have veto power and no schools have yet allowed carry (grey states, except MS); concealed guns are prohibited on campus by law (green states); concealed guns are only allowed in locked cars (orange states); or laws leave it up to the schools to decide, and none of these have yet allowed carry (yellow).  So essentially, 6 states allow campus carry and 44 effectively ban it.

School shooting data, including deaths and injuries, from 2010-present are taken from Wikipedia.  The 6 least restrictive states have had 0 shootings, and thus 0 shooting-related deaths or injuries, since they enacted their current carry laws.  The time of enactment was different for each state:  TX since Aug 1, 2016; CO and UT for the entire period (2010-2016); ID since 7/1/14; TN since 7/1/16; and MS since 2011.  Looked at another way, expressing the denominator as state-years (e.g., for CO it is 1 state x 7 years, or 7 state-years) there were 0 shootings over 23.16 state-years.

Tellingly, the paper’s discussion section is chock full of caveats and hedges, e.g., “The negative association between per capita MHE [mental health expenditures] and incidence of school shooting [sic]…needs to be interpreted cautiously in light of our study’s limitations, noted below, and seen as preliminary.”  But this warning by the authors didn’t stop Business Insider from headlining this dicey finding as fact.

The authors go on to note “five main limitations” in their study:

2) the authors say they were unable “to identify the mental health status of the perpetrators”, making their assertions about mental health funding influencing shootings irrelevant;

3) the relatively small number of shootings weakens their statistical analysis; and,

4) shootings resulting in no fatalities “may be more likely to go unreported by news agencies”, thus skewing the results.

The authors themselves describe a fifth limitation of their study,  an astonishing confession that their claims about mental health and K-12 education spending are practically worthless: “Fifth, to our knowledge there are no studies that have validated the mental health and education data used in our study.”

This goes against all established scientific practice.  Researchers have a professional obligation to validate the sources of their data before using it to prove their cases.

Kalesan and her coauthors only show, one more time, that if you torture the data long enough, it will tell you anything.  The editors at Injury Prevention share the blame; they should never have allowed this paper to be published.

Few mainstream media reporters are capable of critically assessing the claims of anti-gun rights advocacy researchers like Bindu Kalesan. And even fewer are inclined to, since they enthusiastically endorse her message—guns are evil, gun owners are ignorant at best, and gun ownership should be banned.  So CNN, AOL News, and a host of other old media outlets willingly and uncritically reported the authors’ claims.  Mission accomplished.

If Kalesan and the editors of medical journals can’t be trusted to give us the truth about guns, what is to be done?  DRGO will look at the big picture of gun prohibition advocacy research in the next blog entry. Stay tuned.