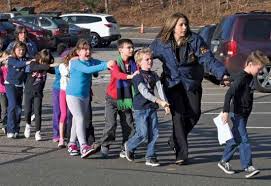 What we should do about school shootings

The Parkland Shooting did not demonstrate the failure of gun laws.  It demonstrated the spectacular failure of law enforcement on every level. The Broward County Sheriff’s Department and the FBI ignored at least 45 calls for service related to the killer Nicholas Cruz.

At least 4 police officers stood outside the school during the carnage, instead of rushing in to kill the attacker as has been standard doctrine since the Columbine shootings.  Whether this was cowardice or they were ordered to stand down, it was absolutely unacceptable.  45 calls were ignored while four officers stood outside doing nothing, yet somehow it is the NRA with blood on its hands?

I am a psychiatrist.  When I was working at the Psych Emergency Room at Olive View Medical Center in Sylmar, California, the Los Angeles County Sheriff’s Department routinely brought in patients for psychiatric holds and told me they did not have the manpower to confiscate weapons even if the subjects admitted to having them. When I was a resident, one of my VA patients at was on a psychiatric hold, but no effort was made to confiscate his firearms, which should have happened pursuant to California’s 5 year psychiatric hold firearm prohibition. He later killed two people.  Had the law been enforced, that gun would have been gone.

What is the point of all these laws?  We need to enforce the laws we have already, before spewing out even more.  What is the purpose of more gun control laws when you can’t even enforce the 10 you already have? The only people who will be inconvenienced by obeying these increasingly convoluted and draconian laws are people like me, who would never murder anyone.  They only serve to strip away our rights in return for the illusion of safety.

2.) Acknowledge that society is inadequate, not gun laws:

In the 1940s and 1950s, there were few gun laws and more guns per capita than there were today, yet virtually no mass shootings.  Kids took their rifles to school, onto the NYC subway, and to afterschool shooting clubs. Children were acclimated to firearms early, taught the rules of gun safety, and learned respect for firearms and for human life.

What changed between the 1940s and today? Not guns. There are fewer guns per capita than ever before. It’s society. In the 1940s, TV and movies were sanitized and free of controversial or objectionable material. Today, children are inundated by violent media and entertainment since from birth.  TV, movies, music and video games today glorify, normalize, and desensitize children to violence. In the 1940s, a boy may have had a rifle on his way to school, but it would never have occurred to him to use it in violence.

Today, you can crash a car into people and shoot up police officers in video games like Grand Theft Auto. You can see massive gun violence glorified by the same Hollywood that claims to hate it. Of course kids (and adults) know fantasy from reality, but they see these things and it starts some of them thinking. “That looks so cool, I wish I could do that to show them . . . wait, why don’t I?”  I am not saying we need to go back to the sanitized media of the 1950s. But we need to acknowledge that this is a side effect of the gritty entertainment we crave, and either change it, or accept the cost.

In addition, the nuclear family has been decimated in America.  The divorce rate is over 50%, with 70% of black children being raised by single mothers.  Numerous studies have shown that fatherlessness significantly increases risk for violence. Nicholas Cruz was an orphan.  Adam Lanza’s father was seldom in his life.  Elliot Rodger, the Isla Vista shooter, had a broken family.  There is a pattern.

Again, as with media, I am not suggesting we return to the 1940s when women were more at the mercy of abusive husbands.  I simply ask that we acknowledge this reality as one of the consequences of our evolving society.

De-institutionalizing America’s mentally ill was done with good intentions, due to genuine abuses of human rights in “insane asylums”. However, there were not sufficient outpatient systems in place to care for all them and the pendulum has since swung too far to the side of patient rights with the freedom to stay ill on the street and in our jails.

It is all too popular to blame guns and the NRA for “gun violence” but there is reluctance to acknowledge the links between mental illness and violence, borne out of politically correctness.  I empathize with the National Alliance for the Mentally Ill and Autism Speaks—they don’t want to be stigmatized. However, it is false to say that there is no link between violence and mental illnesses such as autism and psychoses. Ask any inpatient psychiatric nurse.  My clinic is full of patients on antipsychotics for aggression and violence.  Adam Lanza (Sandy Hook, Connecticut), Elliot Rogers (Isla Vista, California), and Nicholas Cruz (Parkland, Florida) were all diagnosed with autism spectrum disorder.  James Holmes (Aurora, Colorado) and Jared Lee Loughner (the Gabrielle Giffords shooting in Arizona) were clearly psychotic.

There is a reason no mass shooter has ever attacked a police station, a gun store, a gun show, or an NRA convention. It is because people in those places shoot back.  “Gun free zones” are a solution comparable to an ostrich with its head in the sand. Likewise, magazine capacity limits. We have never heard of a criminal voluntarily disarming due to a gun free zone sign. We need to provide our schools with armed guards.  Schedule more frequent police patrols. Allow interested, motivated teachers to be armed in order to protect their students.  Bad guys willing to kill carry guns without permits.  Statistics have shown that CCW holders are involved in less crime statistically than even police officers.

Even if all legal gun ownership was magically banned, and the Second Amendment was repealed, when another mass murder attacks a school we’ll pray for someone with a gun to show up to stop him.  No one has ever been threatened with murder and said, “I wish I didn’t have a gun”.

In California, most heavily populated counties do not issue carry permits to average citizens.  They require that one show “good cause”, in other words, proving some specific, continuing threat to one’s life that no other means can prevent. General “self-defense” is not accepted as good cause. Yet, if you are friends of the County Sheriff, or if you donated to her campaign, she may choose to sign your application. Wealthy, important celebrities can usually obtain one and don’t hesitate to hire armed guards.

This is deeply corrupt and arbitrary.  We should be treated equally under the law, and have equal rights to self-defense. Again, this only serves to disarm the law-abiding. Across the Colorado River in Republican-controlled Arizona, they have approved “Constitutional Carry”.  The state of Arizona recognizes the Second Amendment as the Carry Permit of law-biding non-felon citizens. Anyone over 21 with no criminal history may carry a gun open or concealed in the Grand Canyon State.  Yet the streets of Phoenix are not red with blood, and the sky did not fall down.

Gun rights advocates are not against research or knowledge. We love data. For example, CDC data suggests that defensive gun use is common, at least as common as criminal use. Other research also suggests that guns save many lives and prevent many violent crimes. Mass shootings are extremely rare.  Poverty, drug use and trafficking significantly increase the risk of being the victim of gun violence.

The Journal of the American Medical Association has published data that shows mandatory waiting periods for firearms do not decrease homicide rates.  They do decrease firearms suicides, but not overall suicide rates. This is consistent with logic that suggests people who are serious about suicide will find a serious method.

However, we are against biased research.  We are against research that has a political slant, a predetermined endpoint, and asks politically charged and biased questions.  The UC Davis “Violence Prevention Research Program” is an anti-gun program, and its director Garen Wintemute, MD, MPH is openly hostile to gun ownership. He has said his life mission is to reduce gun violence. Why only gun violence? When you start research with the goal of proving guns are bad, intending to provide justification for gun control, gun rights advocates will fight it?  When you start off with the research question, “What kind of gun control would be most effective?” you already assume that gun control is desirable.

I’ve read Wintemute’s research. Much of it shows large numbers of firearms suicides, with which he argues for more gun control.  However, South Korea and Japan, which do not require firearms, have much higher suicide rates than our country.  Regarding mass shootings, even Wintemute admits that they comprise less than 1% of gun deaths.  He lumps suicides, homicides and accidents together to address the number of “gun deaths” per year, even though suicides and homicide have vastly differing causes and interventions. His work is skewed and disingenuous, with a glaringly obvious agenda.

Gun control advocates believe they already know the answer, and want public money to underwrite research to back up that answer.  If they don’t like the results, they will cherry-pick statistics to back up their claims.  But that is agenda-driven, doing research backwards.  They know the answer they believe in, and don’t want any other solution.

If someone wants to do actual research with non-biased questions that don’t have a presupposed endpoint, we are all in favor of that. If you ask: “How can we prevent homicide/violence?” the answer is that almost all violence in America is clustered in a tiny percentage of neighborhoods in 127 specific cities.

No matter how many guns your neighbor owns, your chance of being the victim of gun violence is astronomically low if you live in a rural area, or in an upper crust place like Malibu.

If you do suicide research you will find that the countries with the highest rates of suicide are South Korea and Japan, both with extremely strict gun control.  Suicide risks such as substance use, male gender, and previous suicide attempt translates across culture and countries.  Circumstantial access to guns as the convenient method does not. In a country with lots of tall buildings like South Korea, jumping off them will be a common suicide method.  There are very few tall buildings in Ethiopia or Chad, and most suicides in those countries do not involve jumping.

Should we conclude that tall buildings cause suicide?  No—people who are serious about suicide will choose the serious method available. Until we fix their reason for wanting to die, we won’t reduce suicide.

Similarly, do guns or owning them cause gunshot deaths? Of course not—people who want to kill pull the trigger. Until we fix the reasons they want to kill, we won’t reduce “gun violence”.

—Victor Chen, MD is a board-certified psychiatrist practicing “behind enemy lines” in the San Francisco Bay Area. He is proud to be a “AAA”: Armed Asian-American. He is passionate about the right to keep and bear arms, and believes “scary black rifles” are necessary to the security of the free state.