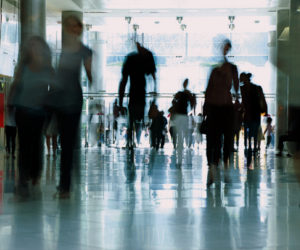 Early this month I attended a day-long seminar given by the San Bernardino (California) County Sheriff’s Medical Reserve Corps.  It was a sit-down class on dealing with active shooter attacks, and especially on one such attack with great meaning to us who live in this county.  The speakers were intimately involved in the San Bernardino terrorist attack of December 2, 2015.

About 200 invitees listened as San Bernardino Police chief Jarrod Burguan spoke for nearly an hour about how a county environmental health specialist attended a Christmas party with co-workers at a state building, the Inland Regional Center.  The employee left the gathering briefly, and then returned with his wife.  Both were heavily armed, and as it turned out, were Islamic jihadists returning the kindness of their American colleagues with a premeditated nightmare of savagery and slaughter.

Burguan detailed the arrival of the first police officers about 4 minutes after they received the first of many frantic 911 calls.  Even that remarkably rapid response failed to mitigate the bloodshed. The terrorists had already fired over 100 rounds, killed 14 people, wounded 22, and fled within 2 or 3 minutes.  The routine failure of even the most vigorous police responses has become part of the grim lore of mass shooting events.  The truism “When seconds count, the police are only minutes away” was tragically borne out once again.

The entire San Bernardino terrorist attack and response is described in this Police Foundation report.

The second speaker was Michael Neeki, DO, an emergency department physician at nearby Arrowhead Regional Medical Center.  Neeki is a SWAT team doctor and one of the tight-knit subspecialty of tactical medicine.  As a sworn reserve police officer with the police department of Rialto, a city adjacent to San Bernardino, Neeki was part of the massive deployment of law enforcement to the Inland Regional Center.  He manned a triage facility on North Waterman Avenue next to the center.  Injured victims were rapidly transported to the multiple hospitals located nearby.

A critical member of the law enforcement team in the aftermath proved to be clinical psychologist Dr. Tammy McCoy.  She described her role as providing emotional debriefing for the law enforcement team, a group not usually amenable to examining their feelings.  But she was able to get through to the officers who carried the terrible emotional burden of what they had to do that day.  Their training required them to walk past the wounded, screaming and grabbing at them for help, in pursuit of the killers, who were still suspected of being in the building.

McCoy helped the officers and other responders recognize and deal with their entirely normal human reactions of disbelief, loss of sense of safety in their community, anger, and grief at not being able to save the victims.  Her work continues as the first anniversary of the tragedy approaches.

Perhaps the most instructive speaker of the day was the San Bernardino County Sheriff’s Department’s Cpl. Pat Rasmussen.  Rasmussen is a speaker to community groups about how to respond to an active shooter attack.  His presentation began with a description of several American active shooter events as far back as Columbine and noted common features of these attacks:

Included in the seminar packet were a Department of Homeland Security (DHS) Active Shooter Event Quick Reference Guide and a more detailed version in a pocket guide (also available as a mobile app) distributed by the Medical Reserve Corps.

DHS has adopted the Run-Hide-Fight sequence of defensive responses to an active shooter. But the scheme still shows federal officials are in denial about the reality of an active shooter.  Experience has shown that survival of targeted victims depends not on expertly trained and equipped tactical officers, but on effective and instantaneous response of people on the scene when the shooting starts.  Here is the DHS-Medical Reserve Corps advice for the third option, “Fight”, when “Run” or “Hide” are not possible: 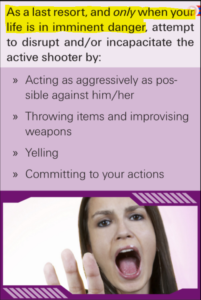 Note the advice “As a last resort, and only [emphasis in the original] when your life is in imminent danger, attempt to disrupt and/or incapacitate the active shooter by

Those of us with use-of-force training will recognize this language.  “As a last resort and only when your life is in imminent danger” describes the exact desperate situation when the law allows a regular citizen to use deadly force to save human life or prevent grave bodily harm.

So why does the Department of Homeland Security recommend raising your voice or throwing a stapler at the killer when what is clearly required is deadly force?

If our dedicated law enforcement officers are sickened with their frustration at not being able to save innocent human lives, how will school administrators feel when they fail to save their kids because they follow such horribly inadequate advice?

Chief Burguan fielded a question from a school official from Los Angeles, a kindly lady who worried that carrying the message of Run, Hide, Fight would frighten school administrators.  The chief diplomatically explained reality to her, something about hiding heads in the sand.

The Inland Regional Center is almost certainly a “gun-free zone” by county policy or state law, which condemned the victims to being utterly defenseless when defensive measures were both fully justified by law and vitally necessary. (Inland Regional Center administration failed to respond to multiple telephone and email requests to confirm or deny a “gun-free zone” policy.)

Two weeks before San Bernardino and right after the deadly ISIS attacks in Paris, I wrote in this blog “As France counts its dead and prepares for the future, all the world must take the lesson to heart. We here in America know that similar attacks within our borders are a certainty…”

But here in California we have still not yet taken the lesson to heart, not even after San Bernardino.  The lesson is that regular citizens must be allowed to defend themselves from deadly attacks wherever they occur.  And the tool known to be effective in the gravest extreme of mortal danger is a handgun and the ability to use it.