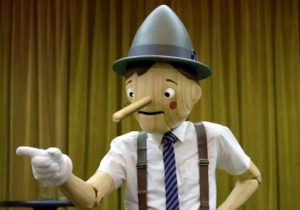 The principles behind the gun control movement can’t survive even the most basic scrutiny, so the Controllers must constantly fall back on that oldest debating strategy: lies.

The lies they favor vary from year to year, sometimes old lies are recycled, sometimes new ones are created and tested to see how well they survive in the wild.

Here’s my list of the current top ten.  See if you agree and feel free to add more.

1- We need to have a national conversation on guns.

This statement is an attempt to obscure the fact that Americans have been debating and passing gun laws since the beginning of the republic.   The Controllers think you have a short memory, slept through American History class and only use the internet to watch silly animal videos.

2- The good guy with a gun is a myth,  especially in regard to mass shootings.

It may seem that way for two reasons.  First, the media deliberately downplays or ignores cases where citizens defend themselves with a gun; it doesn’t fit their anti-gun narrative.  Second, when a mass murder is apparently prevented by a good guy with a gun, there is no way to prove what would have happened otherwise, so the media considers it a non-event.

3- Because of an act passed by Congress, gun Manufacturers can’t be sued.

Actually, they can if they sell a defective product and for many other reasons, just like other companies.  The law only says they can’t be sued for criminal misuse of their product by another party.  The law was passed after the Controllers openly announced their goal to drive gun manufacturers out of business with lawsuits.

As knowledgeable gun owners keep trying to explain, the rifles that the Controllers call “assault weapons” are not machine guns and the ammunition they use is much less powerful than common hunting rifle ammunition.

What about all the extra cops, judges, courts and prisons you need to enforce those laws?  Most current gun laws are not enforced, because we simply don’t have the resources to do so.  Law enforcement agencies sensibly use their budget in ways that produce the greatest benefit and that rarely includes enforcement of gun laws.  Even if one believes that gun control laws can be effective, simply passing more laws without allocating massive additional resources is a waste of time.  The fact that those resources are not appropriated gives you an important clue about the devious plans of the controllers.

You can create polls that will prove anything you want if you get to write the questions and choose who to ask.  When one slanted poll by an anti-gun group happened to produce this result, the Controllers latched onto it and won’t let go, because it is such a useful lie.

7- We won’t take your guns, we just want sensible gun control like in England and Australia.

The problem with this self-contradictory statement is that England and Australia both perpetrated massive forced gun confiscations, aided by prior gun registration.  And of course there have been a number of examples of confiscation in the United States as well.

8- All we want is a sensible compromise.

All right then, a compromise means that both sides give up something, so what are you willing to give up?  If you are just taking things from the other side, it isn’t a compromise, it’s extortion.  The Controllers are playing the old “what’s mine is mine and what’s yours is negotiable” game.

9- You can buy a machine gun at a gun show without a background check.

This blatant falsehood has been popping up for years in the strangest places.  The most famous example is a 2011 Al Qaeda recruiting video, which has been quoted by many anti-gun politicians and media outlets.  If it sounds good, why not use it?  That’s how the controllers roll.

Au contraire! The amendment in question simply said that the CDC could not use your tax dollars to promote gun control, which is what they were shamelessly and dishonestly doing in the years leading up to 1997.  It does not prohibit honest, unbiased research by the CDC, if they ever care to do any.  It also has no effect on the billionaire-funded, junk-science studies, favored by the gun control lobby.

It’s hard to stop at only ten lies, but you get the idea.  Do you see why the two sides in the gun debate never agree on anything?  You can’t negotiate effectively when one side fabricates facts and hides their true goals.  One can only conclude that the gun control lobby is more interested in political posturing and cultural warfare than in reducing “gun violence.”