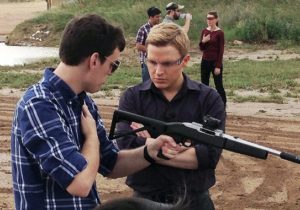 We are told that the average gun owner is a 50 year old white male and that no women or minorities like guns.  Not true!  Many of those who are not typically thought of as gun enthusiasts are becoming more involved with guns and their right to keep and bear arms.

The millennial generation though, just doesn’t seem to get RKBA activism. They often seem more interested in saving the environment, protecting endangered wildlife or whatever may be the cause of the week.

Is their freedom worth saving to them? It certainly is on the endangered list these days. With Bloomberg and his minions attacking our rights state by state and the death of Justice Antonin Scalia, our rights are on the chopping block. Do millennials care? I know many in the younger generation who are very much for freedom and against government control of their lives. So where do they stand on their RKBA?

If defenseless little owls catch their attention, how about defenseless young women?  Carol Bowne was unable even to get a permit to purchase a weapon after months of trying, because the bureaucrats in New Jersey didn’t think she had a “good enough” reason to defend herself.  I think we all know how that turned out.  Carol Bowne was murdered when her ex-boyfriend walked right through the restraining order and stabbed her to death.

The older generation is not the only one wondering about the millennial generation. Some millennials struggle themselves with the inaction and lifestyle of their own generation. Alexis Bloomer posted a video on Facebook that went viral.  In it she says many things about millennials, and the problems she sees with her generation.  She finishes by saying “I hope we start pulling our pants up and actually start contributing to the society we love”.  I have the same hope for this generation, and believe that there are activists to be found in it.

We need more “unlikely allies” like John Connor wrote about in his article in American Handgunner, like millennials who may not look like us but who share our love of guns and liberty. So where do we find them? How do we befriend them?

Catherine Rampell, in her article in the Dallas Morning News is concerned that millennials aren’t as liberal as her generation “given that younger Americans are less Republican in their political leanings than older people are and are also less likely to own a gun.” Rampell is puzzled by recent surveys that also suggest “that younger people might be especially predisposed to oppose gun-control measures”.

Maybe she doesn’t realize that liberty crosses political lines, and maybe we should realize that too.  Are we looking for the typical RKBA activist among the not-so-typical millennials? Are we making the same mistakes that our parents made, thinking that they are the same as we were?

Maybe the younger generation doesn’t agree with the older generation on everything, but if we agree on the RKBA then they are our allies and we need to treat them as such. Are we worried that even if they agree with us on Second Amendment rights that they may not on other political issues?  Even then, we need to engage them where we can and make them our allies, not our enemies.

There certainly are serious young shooters out there. Take Meagan Harrington for example. In an article in Sure Shots magazine last month, Holly Gaylor highlights this young shooter whose goal in four years is to be in “college for Pre-Med and on the USA [Shooting] Team.” We at DRGO really appreciate those goals and hope she is a future DRGO member.

The younger generation does care about liberty.  Most of them do not appreciate government control over their lives. They also show increasing interest in firearms, whether that is in self-defense, recreation or competitive shooting. If we lack activism in this generation it may be because we (the older generation) have simply neglected to invite them into our causes.

So to avoid making that same mistake myself, let me say this to the millennial and younger generations: we need your input, we need your energy, and we need your point of view. Don’t wait until you are our age to pick up the torch.

Stand up, speak out, and join us in protecting our freedoms.  Don’t take them for granted, don’t tell yourself someone else will do it, and don’t wait. America and the freedoms it stands for is in the balance and you have a vital part to play in protecting those freedoms.