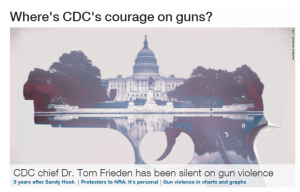 CNN.com’s initial choice of image and title for the article in question.

The title of today’s lead story on CNN.com, “What Happened to the CDC’s Courage on Guns?” tells you all you need to know about the story.  Yes, it’s the latest mainstream media fairy tale about Congress’s 1997 withdrawal of tax money to pay for gun control advocacy at the federal Centers for Disease Control and Prevention.  And it’s full of the distortions, omissions, and gun-hating partisanship we’ve come to expect from CNN.

I knew when CNN Senior Medical Correspondent Elizabeth Cohen and Supervising Producer John Bonifield interviewed me two weeks ago that they were out to push an agenda, not to report the facts.  After all, CNN long ago soiled its reputation by slanting gun-related news stories.

During a 2007 story on semiauto rifles, CNN showed a video of a fully automatic rifle, following the Violence Policy Center’s playbook on how to deceive the public into thinking “assault weapons” are machine guns. NRA Executive Vice President Wayne LaPierre happened to be in the CNN studios when this outrageous lie aired, and he took the opportunity to expose CNN’s lie “in front of the whole country”, as Wayne put it (see first 2:50 minutes of the video)—“Your reporter faked that story yesterday.”

Let me say this, CNN, in front of the whole country.  Your reporters faked that story today.  In a wide-ranging, hour-long interview Cohen and Bonifield grilled me, couching their own biases in the form of loaded questions to me.  It felt more like being interrogated on a witness stand by two hostile lawyers trying to wring a confession out of me.

They took turns asking me long, convoluted questions. These were prefaced by talking points from anti-gun public health researchers, for example, the number of deaths from “gun violence”.  Bonifield went through a detailed narration (an accusatory mini-lecture, actually) of three recommendations from the Institute of Medicine’s 2013 conference on firearms research, asking me what objections I had to researching those issues. I listed my objections, which over two years ago had been published in National Review. Not one word made it into today’s CNN article.

With their circling back to the same questions, their scolding in the form of recitations of gun prohibitionists’ arguments, and their insistence that I agree with them on some small point of their position (funding should be restored, of course), it became clear that Cohen and Bonifield were trying to hound me into saying something, anything that they could use to discredit me.

Cohen asked me for examples of research that I claimed had been ignored by public health researchers, findings that show benefits to gun ownership. I started going through the list—Wright and Rossi, Kleck, Lott, Lizotte—in Part III of my history series.  Bonifield stopped me about halfway through and went to another question. Not one word made it into today’s CNN article.

A few days after the November 30 interview Elizabeth Cohen requested further details for her story:

Thank you for giving us so much of your time the other day – we really appreciate it.

Thanks also for this link [she had asked me for a link to the CDC’s publication “Public Health Policy for Preventing Violence”]. I’ve now had a chance to read it. You mentioned it as an example of the CDC’s bias towards gun control. The authors mention guns many times in many different contexts. Specifically which part of this article in your opinion shows the authors’ bias?

I hope this clarifies why I cited this CDC document in my congressional testimony as evidence of the CDC’s anti-civil rights bias, which its leaders had already admitted to in their public statements.

Now that I have pointed these problems out, will you include them in your story?

A Project of the Second Amendment Foundation

Thanks so much for this!

Apparently Cohen wasn’t all that interested in my answers to her questions, because not one word made it into today’s CNN article.

The most damning evidence of the CDC leaders’ intent to advance the cause of gun control was several comments they made in major media at that time. In 1989 CDC official P.W. O’Carroll was quoted in the Journal of the American Medical Association as saying “We’re going to systematically build a case that owning firearms causes deaths.  We’re doing the most we can do, given the political realities.” He later retracted the comment. His successor at the CDC’s Injury Prevention and Control division, Dr. Mark Rosenberg, was quoted in a 1994 Washington Post article as wanting his agency to create a public perception of firearms as “dirty, deadly—and banned.”

And the most central, dramatic evidence of CDC misconduct in the 1990s was the anti-gun newsletter put out by the Trauma Foundation. This newsletter, which we have described in detail here, was funded by a grant from the CDC. We showed it to Congress in our testimony. It figured heavily in Congress’s decision to defund gun control advocacy at the CDC. And not one word of it made it into today’s CNN article.

But here is the worst part.  There was no reason for Cohen and Bonifield to even know about the Trauma Foundation. After the CDC newsletter scandal, it faded into obscurity and appeared in few if any media reports of the last 20 years.  But Cohen and Bonifield interviewed and then extensively quoted Trauma Foundation director Andrew McGuire, printing his profanity-laden tirade against gun owners in their article today. How did they know about him, other than through my interview?

It’s all but certain that Cohen and Bonifield used my interview material about the Trauma Foundation scandal to contact McGuire for still more anti-gun rights perspective in their story. But they completely buried what I told them about the illegal CDC-funded Trauma Foundation newsletter.

Cohen, Bonifield, and CNN management should be ashamed. These two presented themselves to me as reporters, but are in fact unabashed political advocates. They took my good-faith first-hand description of almost unknown details of CDC misconduct and instead of reporting them, used them to further cover up that misconduct.

CNN wasn’t the only media outlet recently to bury the CDC misconduct story.  The Crain Communications business website for health care executives Modern Healthcare ran a story on the recent Congressional push to restore funding to the CDC. Modern Healthcare reporter Steven Johnson asked me for the interview, and I told him all of the details—the embarrassing quotes from O’Carroll and Rosenberg, the incriminating Trauma Foundation newsletter, all of it.

Johnson only quoted my general statement “If the public is allowed to know exactly why Congress defunded the CDC’s gun research, (the public) will continue to prevent the CDC from using tax money to advance gun control advocacy.”  And then incredibly, he declined to tell his readers any of those details.

Selectively covering up relevant facts, playing down others, routinely giving preference to one side of a political debate, abusing the trust of a news source—I will leave it to my readers to see how many principles of the Society of Professional Journalists Code of Ethics that Johnson, Cohen, and Bonifield violated this week.

I will also reassure DRGO’s readers that this isn’t over yet. We have started getting the details of the CDC gun research scandal out in a big way. More details are forthcoming soon. Stay tuned to drgo.us