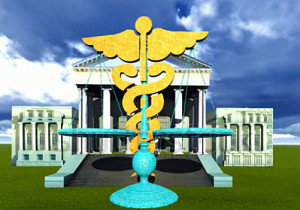 I was glad to see Professor Eugene Volokh weigh in on Wollschlaeger vs. Governor of Florida, concerning the so-called Docs vs Glocks law in Florida. Curiously, to my knowledge none of our familiar Second Amendment constitutional law experts have discussed it at all before he recently did. Volokh thinks the Court of Appeals erred in upholding Florida’s Firearm Owners Privacy Act (FOPA) and believes the law unduly limits doctors’ First Amendment right of free speech.

But I think the court was right.

Professor Volokh’s concerns about limiting speech must be taken seriously, because his acclaimed professional concern for the Second Amendment is perhaps equaled only by his regard for the First. Still, the appellate court has now considered the claims of Wollschlaeger et al. for the third time, and for the third time it has upheld the law. And with this third decision the court explains why FOPA withstands strict scrutiny.

Prof. Volokh writes that strict scrutiny in a court’s judgment is “a deliberately demanding standard in free speech clause case law, which is only very rarely satisfied”.  In the amicus brief of Doctors for Responsible Gun Ownership (DRGO) Professors Caso and Eastman argue that the state has a compelling interest in protecting its citizens’ right to keep and bear arms. And if protecting the exercise of the Second Amendment would not meet the standard, what would?

At this point I shall run away from further arguing a legal case with Professor Volokh. I shall instead contend from my familiarity with the political events culminating in FOPA’s enactment.  These events may not be given much weight in the legal parsing. But to ignore them risks not understanding why FOPA has so far survived a full-on assault by organized medicine and its powerful allies in the legal profession.

It is no accident that these organizations—the American College of Physicians (ACP), the American Academy of Pediatrics (AAP), the Law Center to Prevent Gun Violence, and others—are parties or amici challenging FOPA, and that they enjoy the services of the American Medical Association’s legal department.  All of these organizations actively promote strict gun control up to and including prohibition.

It was those organizations that originally got Florida doctors in trouble. The incident that ignited the public outrage resulting in passage of FOPA was an Ocala, Florida pediatrician following the AAP’s creepily named “anticipatory guidance” policy of asking a young mother about guns in her home. That policy is clear enough. It urges doctors not only to ask parents whether they have guns in their homes, but to warn them with the AAP’s message that “the safest home for a child or adolescent is one without firearms.” The unavoidable conclusion is clear—your doctor thinks it’s best for you to give up your right to own a gun.

And in case anyone doubts where the AAP stands on gun rights, the policy throws in the organization’s longstanding pitches for restoring the failed Clinton-era ban on semiauto rifles, regulating guns as consumer products, and other items from the gun ban lobby’s perennial wish list.  The American Academy of Pediatrics once even partnered with Handgun Control, Inc., now known as the Brady Campaign.

Of all the major medical organizations the AAP has been the most aggressive in urging doctors to use their special position of trust to advance a political agenda of gun control. Professor Volokh briefly acknowledges the problematic nature of the public health community’s treatment of guns only to dismiss it as irrelevant to the case.  In a strict legal sense, it may indeed be irrelevant. But to ignore it is to miss why FOPA came into being.

Even if the doctor’s speech is mistaken (and indeed I find much “public health” literature about guns to be quite weak), “harassing,” or not sufficiently “relevant,” no amount of my doctor’s speech will cause my gun to disappear.

Professor Volokh may not be intimidated by his doctor pressuring him to remove guns from his home.  Indeed, I suspect that as an expert on the Second Amendment’s protections, he would immediately and eloquently set the doctor straight.  But not all patients are like Eugene Volokh.  And a very sick patient may be completely intimidated by a doctor who holds the key to her health, or to her very survival.  Expecting a patient so harassed to simply walk out and try to find another doctor is easier ordered than done.

Most pediatricians believe that the AAP’s hostile view of guns, including telling their patients to get rid of their guns, is the standard of care.  And I know from the specialty breakdown in DRGO’s membership that pro-Second Amendment pediatricians are as scarce as hen’s teeth.

The inequality of the doctor-patient relationship has long been recognized. It is the basis for well-established state laws regulating physician conduct in the exam room, including speech.  As my fellow DRGO writer and psychiatrist Robert Young, MD has written in a summary of the matter:

The doctor-patient relationship, which is supposed to be mutual and purely helping, has always held elements of dependency by patients and paternalism by physicians. It still does; even in 2015, most of my patients expect to be told what to do even though I don’t approach them in an authoritarian way. So when a physician has a personal or political point of view, it can get imposed even unintentionally. Few patients are willing to contradict their doctor’s viewpoint on anything if it is stated as necessary to their care.

I have also written a description of what goes wrong when doctors abuse their patients’ trust to push a political agenda or some other personal interest.  The concept of ethical boundary violations is well-established in the psychiatry literature and is the basis for widely accepted state laws regulating physician conduct.

In summary, the American Academy of Pediatrics as a matter of formal policy tells doctors to use their influence with their patients to persuade them to give up one of their enumerated civil rights.  It is easy to understand why Floridians were so disturbed by this most unprofessional conduct, why their legislature chose to proscribe it, and why the court agrees.