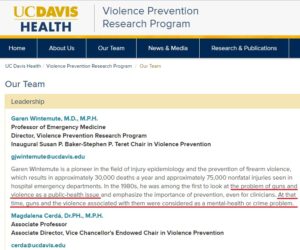 A common adage in the gun owners’ sphere is that a gun is not a talisman. This pithy phrase is used to emphasize the fact that possession does not equal competence.

Picking up a firearm does not instantly turn a novice into John Wick. One must be practiced and proficient both in marksmanship and administrative handling to be safe and effective with a firearm.

In treating an inanimate object as the de facto source and cause of violence, public health hoplophobes like Wintemute ascribe magical powers to a mechanical tool.

This trope is not new.

In 1977, The Richard Pryor Show, with the help of Tim Reid and Robin Williams took much artistic license to portray guns as possessing various personalities, from demonic to jumpy to seductive, tempting people with sinister thoughts. 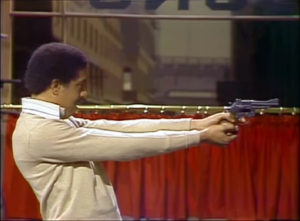 In the late 1990’s Showtime ran a series titled Dead Man’s Gun. Described by Wikipedia as “…a western anthology series…[that]… followed the travels of a gun as it passed to a new character in each episode” ultimately serving as a critical change agent in the characters’ lives.

The Showtime series seemed to give some honest treatment to human nature. The outcome of each episode was not predictable. The gun was not some evil, corrupting force exerting its powers on innocent and pure individuals. The Richard Pryor Show skit, on the other hand, dispenses with nuance. It imbues the gun with agency and power over people.

This is the view of guns that people like Wintemute want the public to swallow. They want people to believe that an inanimate mechanical object has the magical powers of a talisman.

This idea is critical to the ultimate goal of public health hoplophobes: greatly (if not completely) restricting access to guns and the unfettered exercise of the right to keep and bear arms.

While they give passing lip service to “alcohol and drug abuse, mental illness, and the social factors that determine risk for violence, substance abuse, and mental illness“, the bulk of their work reveals an obsession with restricting magazine capacity, restricting access to semiautomatic firearms and a host of other policies that constitute a gun controller’s wish list.

The rejection of psychological, sociological and criminological factors as foremost contributors of “gun violence” is the bedrock on which public health advocacy research rests. That is why all public health work on the matter portrays guns and gun ownership as the determining factor in whatever societal ill we’d all like to see alleviated.

Public health must disregard social, economic and mental health factors for its advocacy to be coherent. In this paradigm, the gun must be the singular, independent, causative factor with its tentacles around the people.

Many people see through this strategy. They know that the portrayal of the gun as a corrupting force, an evil talisman, is essential to the public health anti-gun crusade. As uncommon_sense commented on a republication of one of my articles on The Truth About Guns website:

It is easier to solve a problem with a singular cause. And it’s easier to get popular and political support for issues with a single, clearly “demonstrated” cause. If plagued by a cursed talisman, the first thing to do is to divorce oneself from the talisman; burn it, smash it, throw it in the river.

If the cause of social problem is a particular tool or technology, the “cure” is to ban possession of that tool or technology by the general population. David Hemenway tells us (here, around the 0:30:00 mark) that “gun violence” can be solved in this way.

The end goal here is to get more people to believe that if there are no guns there will be no gun violence – or any violence. 14-year-old boys won’t be killed and gangs will have dance-offs for turf.

By shifting to a public health approach to “gun violence research”, medical hoplophobes get to disregard psychological, sociological and criminological factors. Giving those issues due consideration and fair examination is not just fraught with politically incorrect implications. It is not just financially unsound for a grant-dependent, agenda-driven advocate. It takes the wind out of their sails by pointing to the benefit side of the gun equation—the empowerment, freedom, and affirmation of dignity that this lifesaving defensive tool provides.

[Ed: This is the second in a 3-part series in which Dr. Przebinda explores the “public health” approach to gun control. Be sure to see Part 1 and Part 3.]