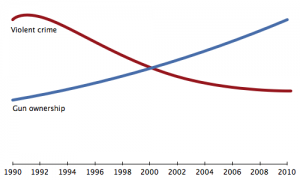 The American system of government has been compared to a policy laboratory. In this view the state governments, within the framework of the federal government, can put to practical test different ways of solving problems faced by all Americans. In this laboratory, best policies will prove themselves over time.

One such problem has been decisively solved in the last three decades—whether the right to discreetly carry firearms for self defense is a public benefit or not. Today, in 2015, there is no longer any reasonable doubt. Allowing good citizens the right to carry not only doesn’t result in increased violent crime, as critics feared. It has been accompanied by a decrease in violent crime.

A predictable cycle of changing public opinion occurred, starting with Florida in 1987, as the states one-by-one enacted right to carry laws. Opponents of the pioneering Florida bill predicted that carry license holders would start gunfights, turning Florida into the “Gunshine State.” Of course, it didn’t happen.

This came as a shock to some, but it was the result expected in light of what we know about what kinds of people commit violent crimes. Criminology research (not to mention common sense) tells us that ordinary people simply do not murder, rob, or rape. And if you allow them to pursue, qualify for, and acquire a license to carry a handgun, they still don’t murder, rob, or rape.

Violent criminals, on the other hand, are far from ordinary. They are “extreme aberrants, their life histories being characterized by felony records, psychopathology, alcohol and/or drug dependence, and often irrational violence against those around them.” (Kates D, Kleck G, The Great American Gun Debate: Essays on Firearms and Violence, Pacific Research Institute for Public Policy, San Francisco 1997, p. 11).

Since the Florida success story, a long line of similar successes has played out across the nation. They all have the same theme: initial suspicion and fear of the right to carry followed by reassurance and acceptance of it.

Hennepin County Sheriff Rich Stanek supports the Personal Protection Act, saying it improved on the former law by increasing the minimum age for a permit to 21, requiring training and providing more fees to finance background checks. “It took away some local control,” he said, adding that the worst predictions of gun-control advocates “just didn’t turn out that way.”—Minneapolis Star-Tribune, April 5, 2007

“So far, it has impressed me how remarkably responsible the permit holders have been,” said Col. James Wilson, Director of Texas Department of Public Safety.

“I am absolutely shocked at how well licensees have behaved themselves,” said Harris County District Attorney John B. Holmes, an early opponent of the concealed-weapon measure.—Dallas Morning News, June 11, 1996.

A year after Arizona’s concealed-weapons law went into effect, authorities say fears of skyrocketing crime rates haven’t proved true. “People expected there would be blood in the streets and gunfights on every corner, but we haven’t seen that, not yet anyway,” Department of Public Safety Lt. Tom Clickenbeard said yesterday.—The Arizona Daily Star (Tucson), July 18, 1995.

“I have been pleasantly surprised,” said Jackson County Prosecutor Hank Zavislak, who opposed the legislation as the county’s longtime sheriff. “We have not seen any major issues with the law and no significant incidents of violence.”—MLive.com (Michigan Live), January 2, 2005.

Kenneth Levin, a West Bloomfield physician, was one of those critics [of Michigan’s right to carry law]. In a letter to the Free Press in July 2001, he referred to the “inevitable first victim of road or workplace rage as a result of this law.” Last month, Levin said he suspected “it probably hasn’t turned out as bad as I thought. I don’t think I was wrong, but my worst fears weren’t realized.”—Detroit Free Press, January 6, 2008.

“Generally speaking, I’m not an advocate for more guns being out on the streets,” he said. But the statistics have shown there hasn’t been any more violence. People are, fortunately, acting responsibly.”—Oakland County Prosecutor David Gorcyca, quoted in The Daily Oakland Press (Pontiac), June 27, 2004.

When the state’s concealed weapons law was passed in 1996, critics feared gunslingers would be strolling the streets of South Carolina, but authorities say the program has worked effectively.

Rep. Gilda Cobb-Hunter, D-Orangeburg, originally opposed the bill because she feared it would lead to more armed citizens walking the streets. But she said Thursday that if “there’s no evidence of abuse, I don’t have any opposition to the law remaining in place.”—The State (Columbia), August 25, 2001.

To obtain a permit, an applicant must clear a thorough background check and complete an eight-hour classroom and target-training course.

That rigorous training and strict background check have been key to the law’s success, said Florence Police Chief Tom Kathman. “They’ve done a very good job of requiring the training and trying to evaluate those people who are applying,” he said. “I think that has been the major focus of whether the program has been successful or not.”

Kathman said the law has created no problem for him. He was neutral on the idea in 1996, he said.—The Kentucky Post (Online Edition), October 13, 2001.

“I have changed my opinion of this (program),” Campbell County Sheriff John Dunn said. “Frankly, I anticipated a certain type of people applying to carry firearms, people I would be uncomfortable with being able to carry a concealed weapon. That has not been the case. These are all just everyday citizens who feel they need some protection.”—The Cincinnati Enquirer, June 16, 1997.

The sheriff’s office has issued hundreds of these permits, and we have yet to see a problem as a result of it.—Ross County Sheriff Ron Nichols in an article he wrote for Chillicothe Gazette.com, August 28, 2007.

There have been few, if any, documented problems involving concealed carry license holders, and area sheriffs said the law has been great for their communities. “I think it’s a great law,” Allen County Sheriff Daniel Beck said. “It’s something Ohio needed.”—LimaOhio.com (web site of The Lima News), September 23, 2007.

“Those with the concealed-carry licenses have been good, law-abiding citizens,” said Robert Cornwell, executive director of the Buckeye State Sheriff’s Association. “The worst-case scenarios that were put out there about the gunfight at the OK Corral didn’t come to fruition.”—The Columbus Dispatch, August 13, 2006.

[Tulsa Police Officer Jason] Willingham said that, in their duties, most police officers rarely come across concealed-handgun license holders. “Most people who go through the trouble of getting a concealed-carry permit are not committing crimes,” he said. “By and large, the people with concealed-carry permits are not the ones we’re coming in contact with.”—Tulsa World, July 1, 2007.

While a year-old law allowing Kansans to carry a concealed handgun hasn’t attracted as much interest as anticipated, officials say they haven’t seen any problems with the law.

Since Illinois became the last state—forced at last by federal courts—to adopt a right to carry law in 2013, it too has found that the world did not come to an end. Crime there dropped, as it had in other states. And one veteran police official recently admitted he was wrong in his initial judgments about carry license holders.

The former head of the Maryland State Police Licensing Division, Captain Jack McCauley, stated in testimony to the Maryland legislature “But you know what, when I met them [gun rights activists] they schooled me,” McCauley said. “They not only schooled, they embarrassed me. They humbled me. I was wrong. I was completely wrong.”

What America has learned from the great experiment of right to carry now brings us into the next phase of affirmation of the natural right of self defense—constitutional or permitless carry. Five states have already adopted constitutional carry, doing away with the requirement of state licensing. A majority of the remainder are in the process of considering it.

Ultimately nationwide constitutional carry will be the logical result of the great experiment. Experience affirms it and natural law demands it.