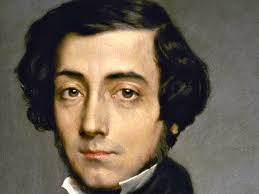 [Ed: Alexis de Tocqueville may still be the premier observer of how democracy works (or can) in America. This philosophical essay cuts to the heart of today’s political conflict, very much relevant to fulfilling the Second Amendment. Shall we define ourselves as a passive collective dependent on government permissions? Or will we retain our insistence on the vigorous self-reliance that obtained and  has so far maintained our liberties?]

Some of the political ideas developed by Alexis Charles Henri Clérel, Viscount of Tocqueville, in his masterwork Democracy in America are becoming apparent today. Tocqueville saw democracy as a continual work in progress, subject to change. . He identified three features in the American polity that he found necessary to a healthy democratic state: local government, civil associations, and the spirit of religion.

At the core of liberty is the people’s participation in local politics. Then, through free civil associations, institutions form that are able to withstand centralized authority. Third, the spirit of religion and the spirit of American democracy work in unison. America was created by a people suspicious of government, who brought with them strong religious convictions. Their accompanying religious tolerance contributed to the separation of church and state, which promoted both religious and political freedom. Tocqueville warned that ridding religion from public life would create the need to believe in something else. This would pave the way for despotism, which can survive without faith, but freedom cannot. The result becomes nihilism.

Americans are increasingly fighting for more “equality of conditions” (to use Tocqueville’s term), the lack of distinction between social and economic class necessary to our political stability. The formerly upper social classes descend the ladder influence while the lower class climbs it. Over a period of centuries, an egalitarian  republic can evolve, where the blessings and afflictions are equally enjoyed by all. But individual liberty and collective equality are always at odds with one another. As one increases, the other suffers. In other words, heightened degrees of liberty and equality cannot exist together.

Americans are increasingly demanding equality of opportunity, with the upper social class descending the economic ladder and the lower class climbing it. Over a period of centuries, Tocqueville thought that the two classes would merge, with the blessings and afflictions equally experienced by all.

The greatest danger of democracy is that it represents the will of the largest class of the community over the minority. Tocqueville held the power of the majority as unstoppable and supreme. The hazard to liberty of majority rule can arise from potential exclusion and disdain of the minority. The power of political correctness is that it stifles thought, rendering inconceivable that which is contrary to the majority. However mild this democratic ostracism, it can exert the most profound effect on free expression of minority views.

The development of regulatory agencies, most associated with the Progressive movement, is a unique threat to individual liberty. Tocqueville believed regulations devitalize the drive of citizens to act for themselves. This science of administration inserts government bureaucracy into every aspect of daily business. Tocqueville saw that history has a tendency toward higher degrees of administrative power which deeply concerned him.

Now, new threats to democracy are becoming apparent. These threats have yet to find a name or definition. The old words despotism and tyranny are unsuitable. Tocqueville’s term douceur, directly translated from the French means mildness or sweetness. Readers of his book The Spirit of the Laws, would have associated douceur with commerce. Greater equality in commerce can make people more genteel to and considerate of one another.

In fact, Tocqueville’s term douceur may be described as a pacifying effect upon a war-like people. This danger to liberty presents itself as very mild and sweet. This pacifying effect can also render us more malleable and subject to manipulation by the state. This can allow the development of democratic despotism, a power capable of maintaining subjects in a a state of political illiteracy.

Individualism stands as another risk to liberty, when people seek to isolate themselves from society, resulting in their alienation from it. Instead of finding new friends and building new relationships, people escape into the safe circles of family and close friends. Tocqueville’s theory was that people too readily become couch potatoes rather than hardy individuals and freethinkers. He believed that democratic peoples are subject to becoming too soft and morally sensitive, and thereby incapable of conveying the virtues of nobility, self-sacrifice and honor. This results in maturity becoming defined by higher levels of compassion and sensitivity. In democracy, too, the road to happiness is too often paved with material possessions. These principal motives of behavior will always conflict: the desires for fame and honor versus that for well-being and happiness.

In conclusion, this sociological and democratic decline will continue if we do not confront it. This must be resisted, for the sake of the future of individual liberty. Political science interpretations we adopt always come down to moral decisions. To a degree, these decisions determine what kind of people we are: dependent upon government or free. Tocqueville believed that the transition from aristocracy to democracy is irreversible, but that the type of democracy we become depends on our intelligence, our will, and our individual values. Whether American democracy will bolster individual liberty or foster collective tyranny remains an unanswered question.