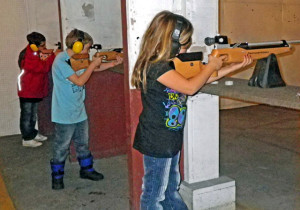 An all too common bit of conventional wisdom is that children and guns don’t mix. In this view, no good can come from kids learning anything about how guns work, the rules of gun safety (other than terrified avoidance), or shooting sports. This has never been true, and now it seems children are being allowed, even encouraged, to pursue shooting sports more than ever, along with being caught tennis and it could be as easy as watching a tennis serve video to learn about tennis. Youtube is a great way for children to learn, they can watch nursery rhymes songs, and have fun whilst they are engaging in music!

The American Academy of Pediatrics (AAP) has long preached against allowing children to have anything to do with guns. Their official policy (revised 2012) starts off with the sentence “The absence of guns from children’s homes and communities is the most reliable and effective measure to prevent firearm-related injuries in children and adolescents.” This document, the product of a doctor’s organization with a long history of lobbying for gun control, only repeats and emphasizes the message in its final section “Summary and Recommendations.”

The AAP worked with the litigating and “educational” arm of Handgun Control, Inc. (now known as the Brady Campaign) in the 1990s to turn parents against gun ownership. Its STOP pamphlet (© 1996, 2nd Edition, American Academy of Pediatrics/Center to Prevent Handgun Violence) starts the reader’s adrenaline churning with the front-page factoid “Every 2 hours someone’s child is killed with a loaded gun.”

The tract further warns parents: “Remember that pre-teens and teens are attracted to guns and see guns as symbols of power. Since you cannot always count on teens to stay away from guns, you have to keep guns away from them [emphasis added]”. This would be news to Rick Hartley, the director of junior shooting competitions at the West End Gun Club. More about this later.

Certain medical researchers have made careers of publishing articles in medical journals implying that children who have access to firearms are likely to shoot another child, are by definition at risk for firearm injury, or are suffering from an epidemic of fatal firearm accidents. They have created an entire subspecialty of advocacy science, with the urgent message that children are at great risk from firearm injuries.

But these examples, like many others in the medical anti-gun advocacy literature, generally overstate the danger to children, which is actually quite low. And in families where parents teach their children responsible use of firearms, that danger is extremely low.

Medical publications about the consequences of guns in the hands of children invariably carry a bad message. That’s not surprising, considering the institutional commitment of medical organizations and journals to promoting gun control. But what about the side of the story we don’t hear from the American Academy of Pediatrics, the American Medical Association, and other outlets of the gun prohibitionist medical establishment?

In fact youth participation in the shooting sports has been robust even as medical organizations have railed against it. With the national support of groups like the National Shooting Sports Foundation and the National Rifle Association, and the innumerable local shooting clubs across America, children age 18 and younger were being mentored under the careful eye of shooting coaches and parents decades before the American Academy of Pediatrics even existed.

I didn’t have to go any further than my own gun club, the West End Gun Club north of Fontana, California to get a firsthand look at these kids. Junior events director Rick Hartley runs the Junior Smallbore Rifle (.22 rifle) matches every two weeks, and also a monthly junior shotgun competition. At the matches anywhere between 8 and 15 kids compete by the NRA’s Smallbore Rifle Rules book. Parents’ written permission is required, and they are encouraged to participate at the matches.

Hartley says there’s a mix of boys and girls, and at least once he had more girls than boys shooting. Ages range from 18 down to as young as 6. He is unaware of any junior range accidents resulting in a gunshot injury either during his tenure as director or before.

Director Hartley also confirms that his young shooters are good, well behaved kids. Learning firearm safety, becoming familiar with the mechanics of a gun, and acquiring hand-eye coordination and patience require discipline and growing maturity. We never hear from the American Academy of Pediatrics of these benefits of supervised learning how to shoot.

These benefits for kids are entirely what we would expect in light of a Department of Justice-funded study (page 18 in the document’s page numbering) that showed “boys who own legal firearms, however, have much lower rates of delinquency and drug use and are even slightly less delinquent than nonowners of guns.”

So it appears that children are not all that different from adults when it comes to firearm use and misuse. It’s no secret to any parent that for better or worse, children learn from them. When parents teach their children how to be responsible with guns, the result is an adult who is responsible with guns.